I have probably watched The Great Muppet Caper around 19,000 times (give or take), and every time I watch I notice something different.  It may be a little hand motion Gonzo makes, or I might try to see what magazine Janice is reading when Beauregard’s cab bursts into the Happiness Hotel (it was the November, 1980 issue of Rock Scene Magazine), or in a rare instance, it could be a previously unseen subplot featuring a minor character.

On my 18,999th viewing of Great Muppet Caper, I chose to stop looking at the Muppets and start paying closer attention to what was going on in the background.  Maybe there was something interesting back there?  Or funny? Or boring?  What I discovered blew my mind, and it will likely blow yours too.

The scenes I’m referring to all take place while Kermit, Piggy, Fozzie, and Gonzo are enjoying an expensive evening of food and dancing at The Dubonnet Club.  When Gonzo decides to raise funds for the meal by selling some photos, he encounters this couple.

This ornery gentleman (who IMDb claims is performed by Trevor Howard, but in this clip of Howard in Gandhi from one year after Great Muppet Caper looks nothing like him – Muppet Wiki is stumped, so his true identity remains a mystery) claims that his wife isn’t feeling well.  When Gonzo suggests that she be at home, he reveals that his wife is at home. Flustered, Gonzo retreats to the next table and the mustachioed gentleman continues his tawdry affair.

It’s a solid gag, and for most of us, his exploits end there.  But to eagle-eyed GMC viewers, there’s much more.

Later in the evening, Kermit and Miss Piggy are enjoying a dance while Kermit attempts to question her about her stolen diamonds.  We’re so busy watching the brightly-colored, well-dressed dancing animals, there’s no reason to be looking at the people in the background.  But lo and behold, there’s a familiar face in the crowd.  The gentleman (who is no gentleman) that appeared to be on a date with his mistress is dancing with another woman!  The cheater is cheating on his cheatee!  What a scandal, but what a dirtbag!

Now, you may be thinking that the triple-timer is just an actor hired to be an extra on set, who was used twice and never meant to be noticed.  And I’d agree with you if it wasn’t for Exhibit C:

As Marla (one third of the Marla, Carla, and Darla trio) scopes out the club, accompanied by her hairdo, she passes by someone who happens to look just like… no, it couldn’t be… yes, it is!  It’s the philanderer, with yet another woman!!!  My goodness, he gets around, doesn’t he?

So in one evening, he is seen dining with two different women, dancing with a third, and he has a wife who’s sick at home.  Frog only knows how many more women he’s juggling at the same time.

I imagine he’s having his own sub-plot in the background of The Great Muppet Caper, having accidentally triple-booked himself for three different dates on the same night, making excuses to leave each date so he can Mrs. Doubtfire himself from table to table and avoid being caught in such an atrocious lie.

Obviously, the Dubonnet Club Debaucher’s deeds are open to debate.  Is he just a background extra, or is he the cheater of the century?  Maybe he’s still out there, collecting middle-aged British women for his ballroom dancing harem.  The world may never know. 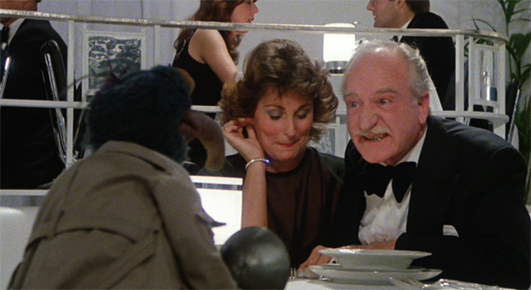 Click here to stay home sick on the ToughPigs forum!