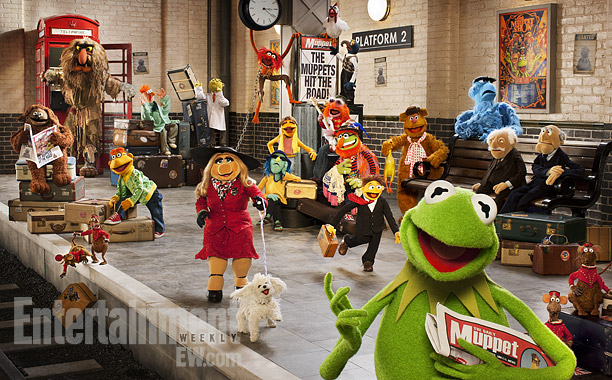 Kermit the Frog sat down with Entertainment Weekly for an interview aboutThe Muppets… Again, and he gave away some important plot info!

Go ahead and read the interview here.

UPDATE: Here is the official synopsis from Disney’s press release, which Kermit refers to in his interview:

Disney’s “The Muppets …Again!” takes the entire Muppets gang on a global tour, selling out grand theaters in some of Europe’s most exciting destinations, including Berlin, Madrid and London. But mayhem follows the Muppets overseas, as they find themselves unwittingly entangled in an international crime caper headed by Constantine—the World’s Number One Criminal and a dead ringer for Kermit—and his dastardly sidekick Dominic, aka Number Two, portrayed by Ricky Gervais, creator of “Derek” and the Golden Globe®- and Emmy®-winning series “The Office” and “Extras.” The film stars Golden Globe-, Emmy- and SAG Award®-winning actress and writer Tina Fey (“30 Rock,” “Mean Girls,” “Date Night”) as Nadya, a feisty prison guard, and Emmy Award winner Ty Burrell (TV’s “Modern Family”) as Interpol agent Jean Pierre Napoleon.

Many thanks to Sarah Labadini for alerting us to the article! Click here to be wrongfully accused on the ToughPigs forum!