Watch This: Miss Piggy Is Ready for Her QVC Closeup in a New Promo 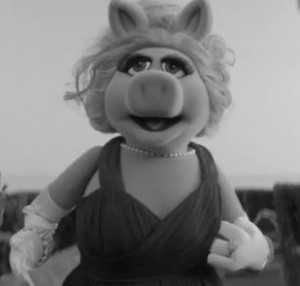 Last month, we told you about Miss Piggy’s appearance on QVC, which was a promotion for later Miss Piggy appearance on QVC, which was an excuse for her to get in a brawl with Joan Rivers.  She debuted a new tote bag she designed herself, she encouraged people to see Muppets Most Wanted, she publicly humiliated Rivers, and everyone had a good time. But wait, there’s more. Piggy isn’t just selling tote bags, she’s promoting a new “lifestyle brand” called Moi.  There’s going to be a whole big thing about it on QVC on March 16th, but in the meantime QVC has posted this beautifully filmed promo.  You need to watch this right now: Wow.  They really seem to have put a lot of time and effort into glorifying the pig. All totally worth it. On a semi-related note, Muppet geeks will of course remember that “Moi” was also the name of Piggy’s perfume in 1998. Click here to mow the lawn backwards and blindfolded on the Tough Pigs forum!

Can You Stand to Have Another Minute of Muppets Most Wanted Spoiled For You?