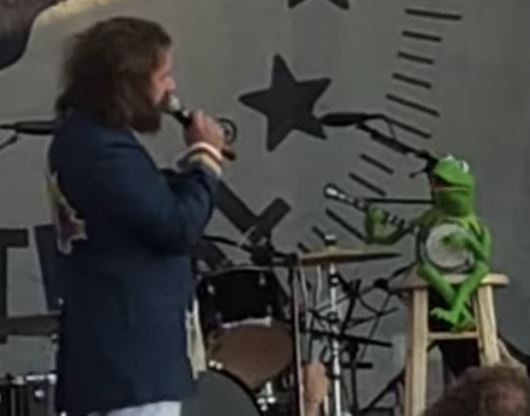 The Newport Folk Festival happened this past weekend in Rhode Island, and by all accounts it was a successful festival, with a great lineup and a few surprises. One of those surprises occurred when an amphibian took the state.

As reported by Pitchfork and many other outlets, Kermit the Frog appeared at the festival — presumably between sets by other artists? — and, backed by a band including former Sleater-Kinney drummer Janet Weiss, he performed “Rainbow Connection.”

Wow! Of all the songs in the history of the universe, Kermit sang “Rainbow Connection!” Can you believe it?!

Halfway through the song, Kermit introduced Jim James from My Morning Jacket to sing the rest of the song with him. Check it out:

Those of us with Muppet-nerd memories may recall that Jim James collaborating with Muppets is not a brand-new idea. Some years ago, there was a project in development that would have seen the Electric Mayhem release an album of songs written by My Morning Jacket and then go on tour to perform them. Kermit’s performance at this festival seems to have been received fairly rapturously, so maybe it’s time to explore more possibilities for live Muppets.

Click here to go electric on the Tough Pigs forum!

Sesame Spoofs Shark Tank, But with No Sharks