On last night’s episode of Last Week Tonight with John Oliver, there was a segment about the dangers of lead paint.

Why am I telling you this?  As seen in the video below, around the five-minute mark, Oliver cites a Sesame Street outreach video that addressed the topic back in the 90s. And shortly after the 14-minute mark, Oliver takes a trip to the street itself to revisit the issue with Elmo, Rosita, and Oscar the Grouch.

It’s a well-executed appearance.  Oliver and the Sesame Muppets are talking about a serious subject, but there’s plenty of humor worthy of Elmo and the gang.  (Interestingly, as a few eagle-eared Muppet fans have noticed, it sounds like Eric Jacobson is performing Oscar for this appearance.) Check it out:

Thanks to Tough Pigs’ own Matthew Soberman for the alert!  Click here to count to one hundred million on the Tough Pigs forum! 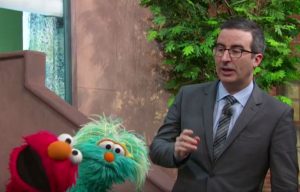 What Does Big Bird Think of the Super Bowl?