The Muppets at the Hollywood Wocka Fame 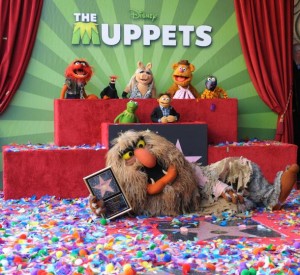 As a general rule, I try to avoid the Hollywood Walk of Fame, especially as you get close to Grauman’s Chinese Theatre. It’s a great place to visit but I wouldn’t want to live there. It’s the same reason most New Yorkers avoid Times Square, or Missourians avoid the Branson Dinosaur Museum & Haunted House – it’s where tourists flock to in way-too-crowded droves. It’s got all the charm of a pop-up ad and unfortunately you can’t press a “block” button to protect you against the Dora the Explorers begging you to take a picture with them and then demand 5 bucks. But if there’s one thing in the world that I would venture past all the actors on break from the Hard Rock Café handing out fliers, it’s the Muppets. So this past Tuesday, venture I did! 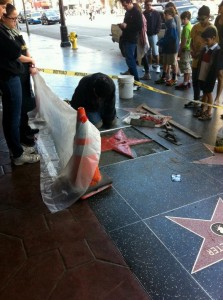 I’d never been to a Walk of Fame star dedication ceremony but from what I gathered the space available around the star fills up, so I got there a little after 9 for the 11:30 ceremony. The star is placed, fittingly, right across the street from Grauman’s in front of the box office of the El Capitan Theatre, where the exterior shots of The Muppet Theater were filmed and where The Muppets had its world premiere last November. I felt like one of the fans outside of the theater at the end of The Muppets, only without the chanting. The crowd was slightly more composed. Almost right across the street on Hollywood Boulevard is Kermit’s star, and down the street a few blocks from that is Jim Henson’s, so it’s a short walk to both of them. On the Sesame side of things, Big Bird’s star is quite a few more blocks east, but still on the same road. And as we all know, there ain’t no road too long to see a dedication to a Muppet.

I was right up against the barricade and in perfect view of the already-set-up stage. Until the T.V. news cameras set up, that is. In my life, I’ve been privileged enough to meet a few Muppeteers but before March 20th I had yet to ever see a real, “live” Muppet in person. All the news cameras in the world couldn’t have prevented my excitement. I simply zoomed in and smiled. The ceremony itself was presided over by Leron Gubler, President and CEO of the Hollywood Chamber of Commerce, who announced that The Muppets were receiving the 2,466th star on what he called “The Wocka Wocka Fame” and declared March 20th, 2012 The Muppets’ Day. Gruber gave a brief history of the Muppets, beginning with Kermit’s first appearance in 1955 and following all the way up to the present. Rich Ross, chairman of The Walt Disney Studios, expressed how happy he was for The Muppets, once again assuring me that they are in good hands with Disney. If you had asked me that same question 2 years ago I might not have been as enthusiastic but they really have been taking good care of them all through the production and release of the new film in theaters and now on DVD. They really do believe in them, and as Lisa Henson said on Tuesday, Jim had wanted them to end up there. It may have taken Disney a little while to get behind Muppet Domination but it’s in full-swing now, for sure. 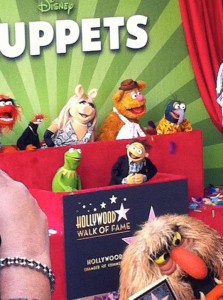 The ceremony’s highlight, though, was of course the Muppets themselves. Front and center were Kermit and Walter, which was a bit of a surprise. Usually Miss Piggy would be the center of attention for something like this, and she was, just not physically in the center. But it’s not entirely shocking since Walter was partially created by Disney and was the only Muppet character there who wouldn’t have existed without them greenlighting this film. The gang – made up of Kermit, Miss Piggy, Fozzie, Gonzo (ushering in the triumphant return of the Chili Pepper Shirt – Yippee!), Animal, Walter, and Pepe – quipped about some of the other stars they were joining, and Pepe asking about a giant check was a big crowd pleaser. Then Sweetums got a huge round of applause as he came out to help lift the casing off of the star beneath a shower of confetti, feathers, and pompoms of all colors.

Performing at the dedication were Steve Whitmire, Dave Goelz, Eric Jacobson, Matt Vogel, Peter Linz, Bill Barretta, David Rudman, and Bruce Lanoil. After the ceremony, the Muppeteers (with the exception of Steve who had other appearances to run off to) stayed behind to graciously shake hands and sign autographs. Eric, Matt, and Peter even had some nice things to say about Tough Pigs, and Peter confirmed once again (without bribe!) that both he and Walter are as big fans of the site as we are of them. For me, getting to congratulate and thank them for their hard work was what that day was all about. Without them, as well as the hard work of those who’ve come before them like Frank Oz, Richard Hunt, Jerry Nelson, and of course, Jim Henson, none of this would have happened.

At one point during the ceremony, Miss Piggy said that she was happy to be among the likes of Norma Desmond, a character in Sunset Boulevard. As Kermit points out that she’s only a fictional star, Piggy says, “Aren’t they all?” Hollywood is home to hundreds of star, both on and off of the Walk of Fame. And while many Walk of Fame stars belong to fictional characters like Bugs Bunny and Mickey Mouse, the presence felt by the Muppets being there to receive theirs was wholly exciting. Fictional or not, they represent a side of Hollywood that embraces childlike enthusiasm and wonderment, and I can think of no act more overdue for this honor than the Muppets.

Enjoy this video of the Muppets at their Hollywood Walk of Fame ceremony: 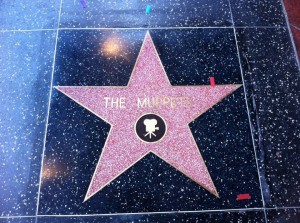 Click here to look down and see the stars on the ToughPigs forum!