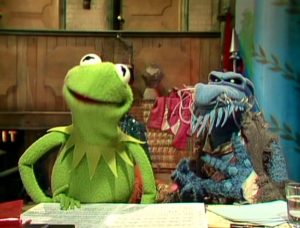 Remember a few years ago when Pride and Prejudice and Zombies came out and people went crazy for it?  Somebody said “What if you took a classic work of literature and added ZOMBIES to it?” And it sold millions of copies, so then somebody said “What took another classic work of literature and added SEA MONSTERS to it?” So then there was Sense and Sensibility and Sea Monsters and that did pretty well too, so then there were a handful of other imitators.

I don’t know why it took so long, but somebody has finally had the bright idea to say “What if you took this classic work of literature over here and added MUPPETS to it?”  I guess the Tales of a Sixth-Grade Muppet series was kinda-sorta like that, but it was more of a knockoff of Diary of a Wimpy Kid and other, not-yet-classic works of literature.

Anyway, the new book is called Muppets Meet the Classics: The Phantom of the Opera.  It’s already listed on Amazon with an October 17, 2017 release date, and it’s credited to Erik Forrest Jackson (Author) and Owen Richardson (Illustrator). Amazon describes it thusly:

What do you get when you cross the Muppets and the classics? A monster hit! Join Kermit, Miss Piggy, Uncle Deadly, and the other Muppets as they bring this gripping tale of mystery and suspense to life in their own hilarious way.

This classic tale of love, intrigue, and jealousy at the Paris Opera House, which has thrilled readers, musical lovers, and movie goers for more than a century, has now been reimagined with the cast of the Muppets. Readers will gasp, cry, laugh, and laugh again as Kermit (as Raoul), Miss Piggy (as Christine), Uncle Deadly (as the phantom), and the chickens (as the ballet corps) give a whole new meaning to the word “classic.” This imaginative tale is sure to win the hearts of all Muppets fans, as well as fans of literary classics.

Guys, Uncle Deadly is getting third billing after Kermit and Piggy! We Muppet fans all know Uncle Deadly is the original Phantom of the Muppet Theater, but just a few years ago it would have been unthinkable for him to be the title character in such a book.  If this book had come out in 2010, it almost certainly would have been Gonzo as the Phantom.  But then Deadly made his comeback, and now he’s one of the brightest bulbs in the Muppet chandelier.

The Muppets Meet the Classics title seems to indicate that this is the first in a series of Muppety retellings of classic stories.  Here are some ideas I just now came up with for future installments: A Christmas Carol, Treasure Island, and The Wizard of Oz.

Big thanks to Tough Pigs pal J3h for the alert!  Click here to gasp, cry, laugh, and laugh again on the Tough Pigs forum! 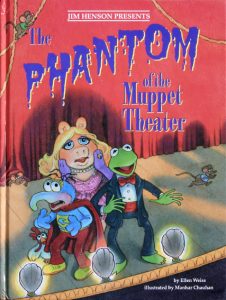