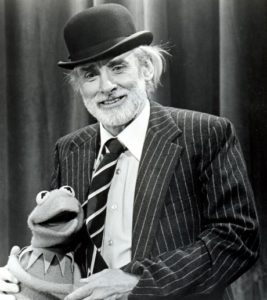 Any conversation I’ve been in where the topic of “best and worst Muppet Show episodes” comes up, someone usually mentions the Spike Milligan episode as one of the worst, and they’ll usually say “because it’s racist.” Then someone else will say, “What do you mean? It’s not racist, it’s funny!” Then the first person says, “It’s not funny, and you’re racist!” And then the second person says, “I’m not racist, the episode isn’t racist, and you’re a self-righteous jerk!” And then I have to act as a human shield before the police are called. Okay, maybe it doesn’t actually happen like that, but this is definitely one of the most polarizing episodes in the show’s history. People love it or hate it.

Well, I guess we knew this day was coming for nearly two-and-a-half years… let’s talk about the Spike Milligan episode.

When ToughPigs writers were picking our episodes to review for this season, I made this the first one I chose because I loved the episode and I wanted to make the impassioned plea that it wasn’t offensive, as some had made it out to be. I also hadn’t watched it in a few years. So, when coming back to it, something happened that I didn’t expect: I actually saw why people thought it was offensive. 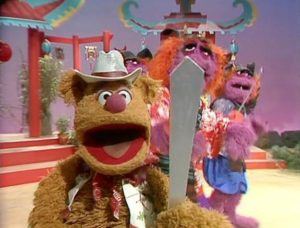 There are some serious stereotypes here that simply do not fly with today’s sensibilities. Let’s start with the first musical number. The setup is that they’re doing a tribute to Japan, with a kabuki set design and the Mutations dressed as samurai dancing with swords. Out comes Fozzie Bear in a cowboy outfit singing “Oklahoma.” Inherently funny premise, right? Then, several Japanese Muppets come out singing “We know we berong to the rand/And the rand we berong to is grand!” And that’s where it all falls apart. It’s a spectacular premise, with a great conclusion (Spoiler alert: “Oklahoma” becomes “Yokohama.”), but it’s that terrible characterization that derails what should be a fantastic sketch. The finale, an all-nations tribute set to “It’s a Small World” where Milligan evades the guard of Sam the Eagle, is hysterical, until Milligan disguises himself in a Chinese outfit and buckteeth and starts chattering around in mock-Chinese. It kills the whole mood. Really good bits just fall apart when they decide to “go there.” It doesn’t fit with the whole feeling of Jim Henson’s work.

And that’s what gets me about this episode: when it doesn’t delve into cringe-worthy stereotypes, this is one of the funniest episodes of the whole series! Milligan’s loony, quick-witted style often has him out-Muppeting the Muppets! “The Intergalactic Brotherhood of Man, Including Things” is a brilliant bit with absurdist, rapid-fire humor where I have fun just trying to keep up with the piece. The premise of an international tribute as done by the Muppets is absolutely perfect for the ensemble. The Swedish Chef manages to bring together Muppets from around the world with a single punchline: “linoleum.” A Scottish bagpipe player plays “Aqualera do Brasil” and “Hava Nagila,” for goodness’ sake! This is classic Muppet material! The episode is at its strongest when they subvert stereotypes, rather than fall back on them. When they’re not going out of their way to be controversial, this is spectacular stuff. 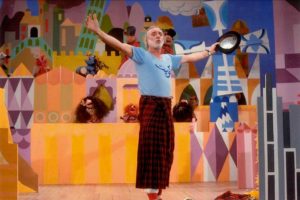 So, after all this examination, is the episode racist? Not to me. I genuinely believe that this work doesn’t come from a place of hatred or deliberate bigotry. I think a more fitting adjective is insensitive. The one thought that kept coming back to my head when writing this review was that this was made for 1979 – sensibilities were different, and we’ve become a more inclusive society. These stereotypes weren’t avoided because they were more acceptable then. I’ve accepted this episode as a product of its time rather than timeless (like most episodes of The Muppet Show). But I also realize that I am a white male, and not necessarily the target of mockery. If I were Chinese, Japanese, or Arab, there’s a good chance I’d feel differently about the subject. It doesn’t mean that it was right (and as far as I’m concerned, it wasn’t), and I can understand why an otherwise fun episode is looked upon with disdain. But for all of its issues, I still find myself enjoying it after all this time. 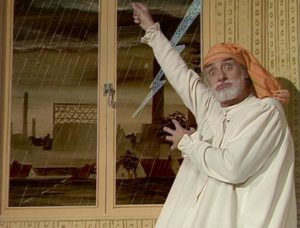 Best Joke: At the beginning of “The Intergalactic Brotherhood of Man, Including Things,” Milligan says: “Now, a good evening.” He then pulls down the curtain behind, revealing a pleasant night scene. He then says: “Now, an appalling evening!” He pulls the curtain again, revealing terrible weather. Later, Lew Zealand enters the scene and wishes Milligan “a very good evening.” Milligan pulls down the curtain to reveal the pleasant night backdrop again, and shouts, “They already know that!” Quick, unexpected, and a play on the tropes of a monologue. Beautiful.

Worst Joke: At the goodnights, Milligan emerges with a Native American headdress and says, “Me — me not go. Me like it here. Me not say goodbye. Me say, ‘Hello, sailor!’” Because of course that joke needs a Native American caricature to work, right?

MVM (Most Valuable Muppet): Funny, this episode shows so many characters that none of them really get the focus of the episode. Still, between uniting the world with “Linoleum” and then declaring war on Spain, The Swedish Chef has the most memorable moments: two. Still, victory is victory!

Most Classic Moment: The Electric Mayhem performing “America” from West Side Story with an international accompaniment of Muppets is as good as it gets.

Should-Be-Classic Moment: “The Intergalactic Brotherhood of Man, Including Things” is a highlight. Bizarre, fast and loony: the perfect Muppet combination.

Most Dated Joke: Please read the above review. (And my apologies to all nationalities and ethnicities stereotyped in this episode.) 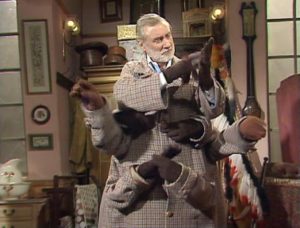 Coolest Puppetry Effect: Milligan’s “coat of arms” in the cold open. And props to all those puppeteers who had to cram in there to make it look right!

Musical Highlight: Bad stereotyping aside, I’m a huge Disney parks fan, so when the Muppets cover “It’s a Small World,” it’s kind of a big deal for me. Just try to ignore Milligan after his second appearance.

One More Thing: In the aforementioned finale, Milligan wears a shirt with Arabic writing on it. The writing translates to “Kuwait.” But rather than just adding one more nation to the finale, “Kuwait” is a play on Q8, Milligan’s sketch show on the BBC at the time. It’s a bad pun, I know, but at least it’s not a stereotype.

Okay, One More Thing: Let’s get this out into the open. In the finale, it looks at one point as if Milligan is giving the Nazi salute. While Milligan was never afraid to mock Nazism (he literally titled one of his memoirs Adolf Hitler: My Role in His Downfall), the gesture could also be a reference to the Red Hand of Ulster salute, used by some Northern Irish citizens loyal to Great Britain during the conflict between Ireland and Northern Ireland at the time. Or it could simply be a Roman salute. Still, not the best choice of gesture on a family program like The Muppet Show. 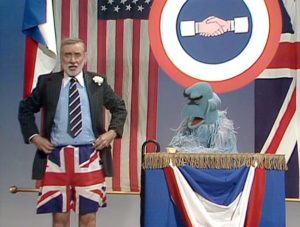 Believe it or not, this is one of the least controversial things in this episode.