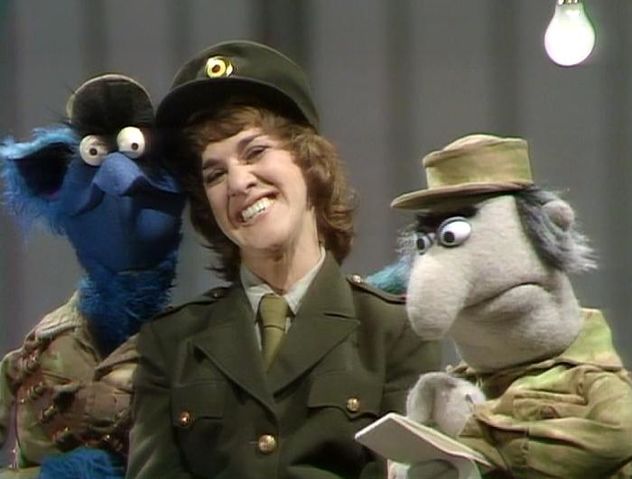 Ruth Buzzi appearing on The Muppet Show makes a lot of sense. The comedic actress already had a lot of variety show experience as a regular cast member on one of my most favorite TV shows of all time, Rowan & Martin’s Laugh-In. If you’ve never seen Laugh-In, it’s a trip back to the free love, stoned-out Sixties. Ruth was well-known at the time for her recurring Laugh-In character Gladys Ormphby, and it’s a shame that she doesn’t make an appearance on this episode. What she does do is bring out the most welcome sketch-comedy oriented and adult-sides of the Muppets.

What makes this episode feel a little more grown up? For one thing, Buzzi is steadily touching her Muppet co-stars. I know it seems like a weird thing to bring up, but Buzzi relishes running the fleece, foam and fur of the Muppets through her strong-looking comedienne’s fingers. In her first appearance in the episode, she’s hard-core wrestling with Sweetums, who exclaims at the end of the number when he’s defeated “That’s my kinda woman!” They’re dueting on “Can’t Take My Eyes Off You,” but it’s more like “Can’t Take My Hands Off Your Dense Fur, Sweetums.” 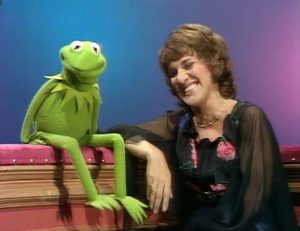 Keep your giant, tickling hands away from me, Ruth!

During her one-on-one with Kermit, she tickles the hapless frog and knocks him around a bit. A classic season one news panel sketch devolves into a total tickle-fest by the end. It almost makes me wonder if Buzzi approached Jim Henson and his writers and was like “Can I touch as many of your inconceivably expensive and one-of-a-kind puppets as possible?” and Henson was all “Yeah, that’s cool Ruth, but just wash your giant hands before, kay?” It would be a great drinking game to take a shot every time Buzzi touches a Muppet when watching this episode.

Buzzi’s comedic timing results in a pretty sharp Muppet Show overall, including a well-written sketch in which she turns the tables on some army Muppets interrogating her. In fact, I found myself wishing for more Ruth Buzzi because she’s such a charmer. She worked so well with the Muppets that she ended up with a recurring role on Sesame Street from 1993-1999 as Ruthie. Yeah! Your childhood makes more sense now, right?

It’s not that the rest of the episode is disappointing by any measure. This is one of the stronger ones from the first season. We’ve got a fun sub-plot involving Kermit being replaced by a wind-up TV show host doppelganger who has, er, “feelings” for Piggy. The intruder’s more of a pig than the pig he’s got his ping-pong ball eyes on. Kermit and his robot double even do a version of the same mirror gag originally from The Marx Brothers’ Duck Soup that was used almost 40 years later in Muppets Most Wanted. In fact, this episode may have been where Nick Stoller et. al got some of their ideas for that film’s screenplay.

But beyond all the typical Muppet silliness we’ve got touchy and touching Ruth Buzzi. I’m glad that this was her first appearance with the Muppets but certainly not her last.

Best Joke: The whole interrogation sketch with Buzzi is great. A melding of her Laugh-In sensibilities with the goofiness of the Muppets.

Lamest Joke: From the At The Dance segment: 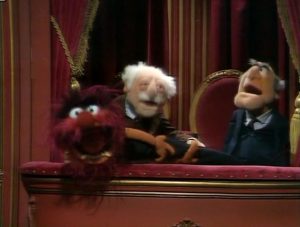 MVM (Most Valuable Muppet): This one goes to Animal, who in this episode makes the Electric Mayhem pick up the pace on a great cover of “Sunny” and later grabs Statler’s leg and stretches it out! Animal! You so Rock N Roll!

Most Classic Moment: This episode features Rowlf at his keys singing the gently humorous “I Never Harmed An Onion,” a favorite from one of the best Muppet music albums Old Brown Ears is Back. This is a classic vocal from Jim and well worth a listen.

Most Dated Joke: At one point Sam the Eagle mixes up Yoga and yogurt, cuz The Seventies, guys.

Adultiest Content: Wind-up Kermit’s got it bad for Piggy, in a way that’s… uh… how to put this in a tasteful way: fresh? Yeah. I’ll go with fresh. At one point he tries to seduce Piggy by saying “How bout’ you and me getting together and making some steam heat! Let me take you away from all this. A marriage made in heaven, a frog, and a pig, we can have bouncing baby Figs!” Yeah. Step off fake Kermit. You’re pushing it for a family audience.

One More Thing… Did I mention I love Ruth Buzzi?

Okay, One More Thing… Did I mention she loves touching Muppets? 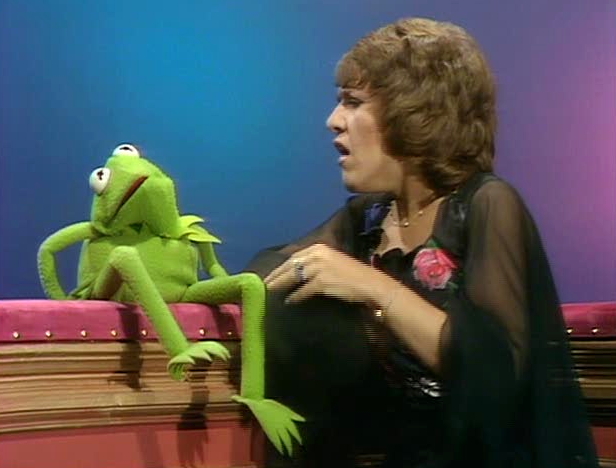 Click here to have a touching moment on the ToughPigs forum!