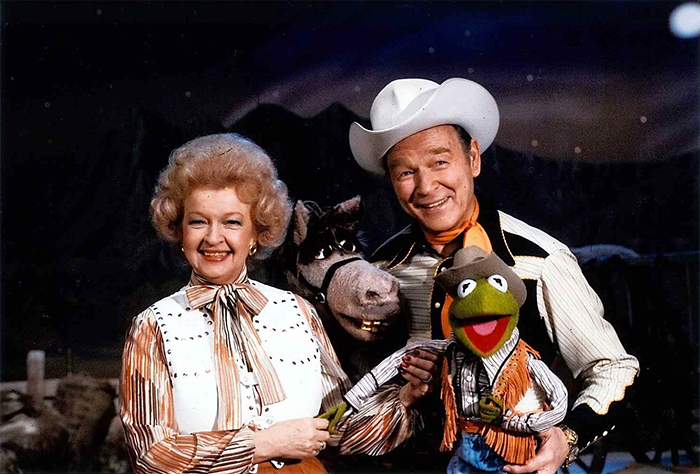 Finally, The Muppet Show got around to featuring everyone’s favorite guest stars.  This is the episode starring your grandparents.

Okay, I realize that it’s extremely unlikely that Roy Rogers and Dale Evans are actually your grandparents.  But in rewatching this classic Muppet Show episode, that’s exactly what they seem like.  It’s not just that they’re old – I didn’t get that vibe from Señor Wences or George Burns (both of whom were born in 1896!!!).  Rogers and Evans just exude that grandparent sensibility.

Maybe it’s because they spend the entire episode smiling, like they’re getting down on their knees to play with the grandkids.  And with the added element of the western motif, it’s like they’re visiting from out of town.  And you can totally see why your parents had a troubling relationship with them, but they slip you a $20 bill every time they visit and say, “don’t tell your mom” with a wink, so you think they’re cool. 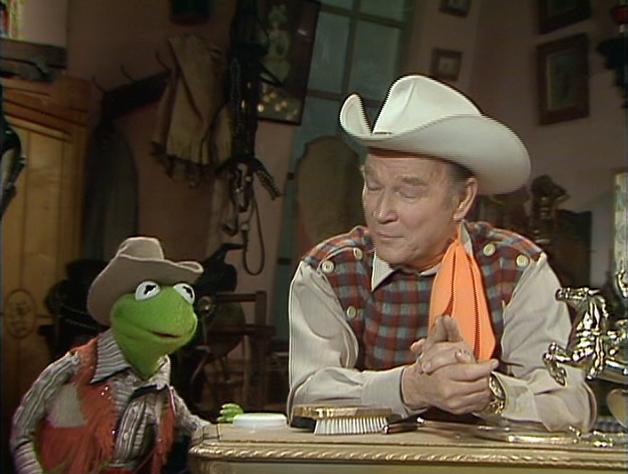 Despite coming packaged as a duo, Roy Rogers and Dale Evans each have some solo moments that reinforces this “grandparent” metaphor that I guess I’m sticking with throughout this review.  Rogers shares a lovely number with Kermit in which he teaches the Frog how to yodel, which very much reminded me of my own grandfather teaching me how to shave or tie a windsor knot.  Evans sings “Deep in the Heart of Texas” with a group of wailing Muppet babies, thus cementing her as the grandmotheriest guest star in Muppet Show history (though Phyllis Diller is probably the most similar to my own grandmother).

There’s something comforting about seeing a couple like Roy Rogers and Dale Evans on The Muppet Show.  I think a lot of people might write this episode off due to the country music theme, and that’s a shame.  Yes, it’s possible you may not sing along with “Happy Trails”, but you’d be missing out on some genuine sincerity, down home goodness, and southern comfort.  This episode is Americana at its best, free of all the negative implications we might assign to the South today, and full of kindness and familiarity.

Best Joke: In one of my all-time favorite musical numbers, “A Four-Legged Friend”, the Jim and Jerry Muppets trade silly jokes about the not-quite-horses they’re riding.  Each one is gold, especially the side comments like, “Something about this life don’t seem right”.  Just watch the video above so I don’t ruin them by quoting them here.

MVM (Most Valuable Muppet): Link Hogthrob. Not because he’s particularly memorable in this episode, but his sheriff costume (in the western-themed Bear on Patrol sketch) features not one, not two, but three sheriff stars.  Fashion! 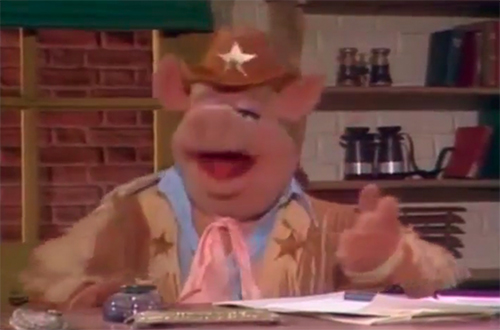 Lamest Joke: One of the B-stories in this episode features Fozzie Bear telling bad jokes to some cows. Fozzie is at his best when he’s trying to be funny, but fails.  When Fozzie’s jokes actually land in-story, their lameness is blatant for the audience at home.  Especially as he rattles off some cow-favorite songs: “Catch a Falling Steer,” “If Heifer I Should Leave You,” and “Moooooon River”.

Most Classic Moment: All those bad cow jokes lead up to a memorable Muppet moment – the “herd of cows” routine.  Most Muppet fans can quote it by heart.

Coolest Puppetry Effect: Waldorf gets lassoed and pulled down from the balcony. Which, I assume, is especially difficult when there’s normally a hand inside the puppet.

Musical Highlight: No joke, my all-time favorite Muppet Show moment is “Blue Skies”, as performed by the prairie dogs.  The song is super catchy, the prairie dogs are cute, their scatting sounds amazing, the choreography is even better, and it’s just damned fun.  All that, and the number doesn’t even rely on any jokes or familiar characters.  I love it times a billion.

Missed Opportunity: I always like it when the guest stars branch out from their usual routines on The Muppet Show.  That’s how you get tap dancing opera singers and singing ballet dancers.  Rogers and Evans stay pretty close to their familiar shtick, which is fine but not incredibly risky.

Obscure Character Watch: A rare appearance by the Lobster Banditos, who show up during the strangely-toned Mexican portion of Rogers and Evans’ medley. 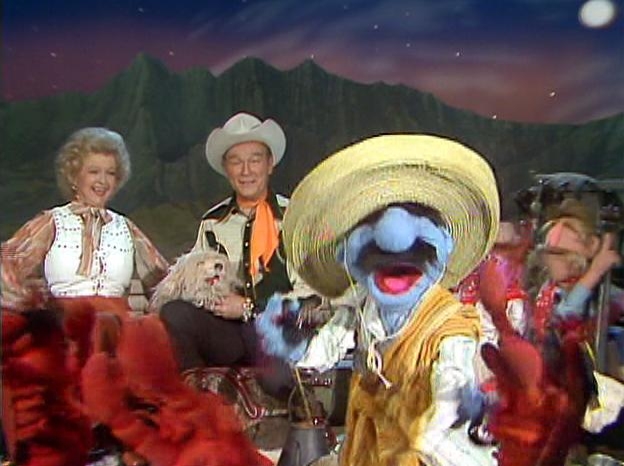 Adultiest Content: Statler and Waldorf show off their NRA memberships by whipping out their guns in two different scenes. First, they say “Let’s put this show out of its misery” before opening fire on the stage.  Later, Statler forces Waldorf to “dance” by firing the gun at his feet.  Honestly, both result in solid jokes, but I’m not so sure it was a good idea to promote gun ownership on a kids show.

One More Thing…: The Muppet films don’t get many mentions throughout the course of The Muppet Show, but Kermit alludes to The Muppet Movie after Roy Rogers says he’s made 189 films. Kermit responds, “You know, I’ve only made one.  188 to go.” Man, wouldn’t it be something to have almost two hundred Muppet movies???

Okay, One More Thing…: The lead-in to Kermit and Roy Rogers’ backstage moment features a brief duet of “Froggy Went A Courtin'”, which Kermit sang waaaaay back in The Muppet Show‘s pilot, The Muppets Valentine Show! 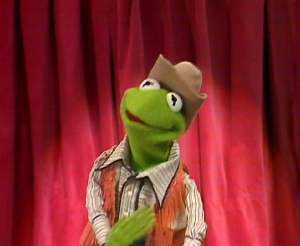 Click here to buy a black hat on the ToughPigs forum!