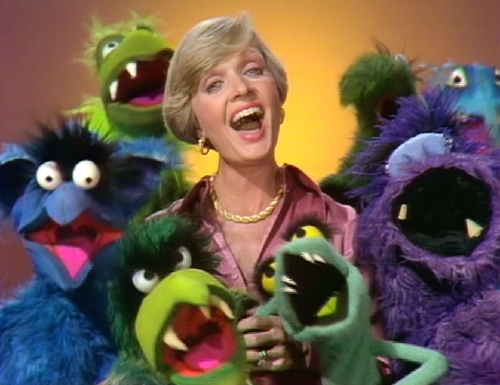 Are Kermit and Miss Piggy one of the great love stories of television and film?  The folks who cried when they “broke up” for the ABC series last year might like to think so.  But the Florence Henderson episode of The Muppet Show is a great example of just how effed-up their relationship has been, especially in these early days.

At this point, The Muppet Show is still gradually inching its way toward backstage stories with an actual beginning, middle, and end.  This is one of several episodes with recurring incidents that resemble a plot, but don’t really go anywhere.  But the writers are getting there — and they’ve also realized they’re onto something with this dramatic pig who has a thing for Kermit.

So most of the backstage scenes, and Kermit’s Talk Spot with guest star Florence Henderson, pretty much go the same way: 1. Piggy aggressively declares her love for Kermit, 2. Kermit rejects her, 3. She karate-chops the crap out of him.  The writers would eventually take the pig & frog dynamic to considerably more interesting places, but the same basic three-step formula has always been lurking there as a tempting fall-back.  If not for Frank Oz’s insistence on giving Piggy more depth, it’s easy to imagine the joke wearing really thin really early, and Piggy fading into obscurity like George the Janitor. 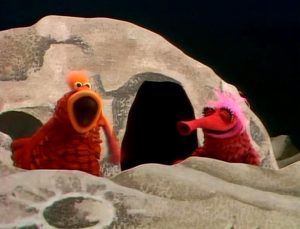 This episode also includes the Koozebanian mating ritual sketch, previously performed on The Muppet Valentine Special.  You know, the sketch where the male Koozebanian and the female Koozebanian scream at each other, then smash their bodies together to generate an explosion that produces baby Koozebanians?  It’s hilarious, thanks largely to the performances of Jerry Nelson and Frank Oz.  But sheesh — first we have Piggy beating up the guy she has a crush on, then we have Koozebanians violently destroying themselves to show their affection… Maybe this episode should have carried the Sex & Violence subtitle.

Elsewhere, everyone’s favorite Muppet, Lizard, confesses to Florence Henderson that he and an assortment of other Muppet creatures have feelings for her.  Fortunately, in a departure from the theme of the episode, Henderson and the creatures don’t commit any acts of violence against each other, they just sing “Happy Together.”  Henderson seems completely cool with singing a love song with a bunch of monsters and Frackles, and I think she may have been romantically linked with Boppity for a while after taping this episode.

But here’s something weird.  “Happy Together” is a rousing number with the guest star and lots of Muppets.  That sounds exactly like a closing number, doesn’t it?  But no, it’s followed by a brief Sweetums gag, a backstage scene, and then the Koozebane sketch.  And then the episode ends!  There is no closing number!  And here’s something even weirder: There’s no opening number either!  Instead, we get some clumsy pig acrobats doing their act, a sequence most notable for providing our first glimpse of the stage floor when they crash through it. 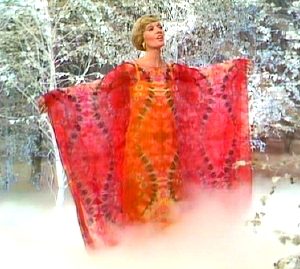 The song that feels like it would normally be the opening number is the infamous “Elusive Butterfly,” a song performed by the guest star.  You know, I can remember when the first season of The Muppet Show was first released on DVD.  So many of us fans were thrilled to discover episodes, characters, and sketches we had never seen before.  It was like, “Wow, look at that!  And look at that!”  Then we got to the “Elusive Butterfly” number, and it was like, “What the heck is that?”

Florence Henderson is a fine singer, and I’m sure she was eager to show off the singing skills she hadn’t gotten to use much on The Brady Bunch.  But do you remember the one where Cindy Brady asks Santa Claus to bring her mommy’s voice back so she can sing in a Christmas pageant?   If Santa is a Muppet fan, he might have thought twice about granting that wish if he knew it would lead to this number. 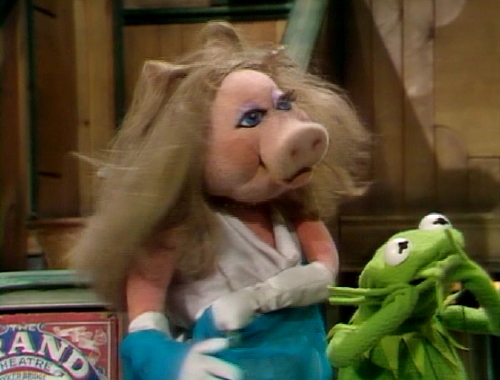 Best Joke: I have to give it to the “Loud Lady” in the “At the Dance” sketch.  Not because the joke is funny, but because Jerry Nelson is brilliant. (Lady: “Can I take this moment to announce our engagement?” Boyfriend: “Sure.” Lady: “WE’RE ENGAGED!  WE’RE ENGAGED!”)

MVM (Most Valuable Muppet): Rowlf’s performance of “Cottleston Pie” in the UK Spot is an understated highlight of the episode. 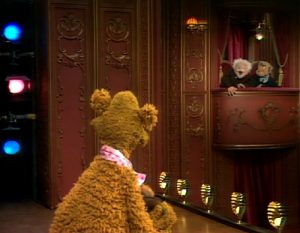 It’s Okay That This Is Not Considered a Classic Moment: Fozzie does impressions of movie stars, which turn out to just be him spouting off their catch phrases in his normal voice. This seems like it would be a classic bad Fozzie act that we recall fondly, but I know I’ve seen the same basic premise done in many other places.  Wasn’t Andy Kaufman already doing essentially the same joke in his act at this point?

Coolest Puppetry Trick: Not exactly a trick, but I wanted to mention it: Sweetums tells Florence Henderson that he could really fall for her, and then proceeds to fall forward.  Of course everything on TV is fake and there was some kind of safety mat there, but I can’t imagine letting myself go totally limp and falling like that… and yet Richard Hunt does it inside a big ol’ puppet!

Most Obscure Reference: Piggy declares that she’s like putty in Kermit’s hands: “Putty!  Putty!”  To which Florence Henderson cheerily responds, “Ce-ment mix-er!”  The only reason I know that this is a reference to a popular song from the 1930s is that I read it on the “Muppet Morsels” trivia track on the DVD.

Obscure Character Watch: Florence addresses Lizard as if he’s a familiar character, but we’d never see him again.  I mean, we’d see that puppet, but not as the same character.

First Appearance Of…: The Planet Koozebane, at least on The Muppet Show series.

One More Thing: At the beginning of one of the later backstage scenes, Kermit looks at his notes and mumbles, “We didn’t have time for Gonzo this week, that’s too bad…”  Which is true.  Gonzo doesn’t appear in the episode outside of the theme song.  How meta. 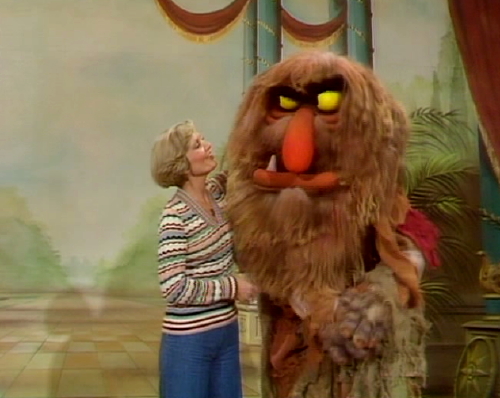 Click here to chase the bright, elusive butterfly of love on the Tough Pigs forum!