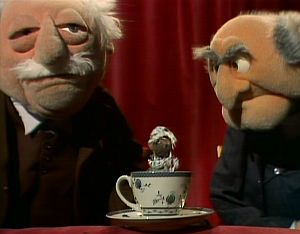 As a kid, I was obsessed with old school, classic Broadway musicals. From Man of La Mancha to Music Man. From Hello Dolly to My Fair Lady. You named it, I loved it. So it goes without saying that when I was growing up I kind of adored all things Ethel.

While my love of older musicals has diminished a little over the years, replaced with an adoration of newer, 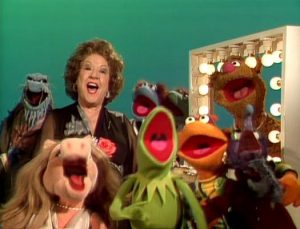 fresher musical theater, I still have a tender place in my heart for the big-brass-band musicals of the 60’s and before.

It’s no surprise that Ethel Merman’s episode of The Muppet Show has always been one of my favorites; it’s a pleasant episode through and through. Ethel Merman makes for a delightful guest: she interacts well with the Muppets, pulls off a number of good jokes, doesn’t take herself too seriously, and is clearly having fun on screen. What’s more, she gets to shine doing what she does best: belting with that crazy awesome vibrato of hers.

In this episode, we get two big numbers with Ethel Merman. Since she did so many beloved musicals throughout her lifetime, the first is a medley of seven songs from some of her shows, which she sings with various Muppets (Scooter on ‘De Lovely’, ‘You’re the Top’ with Kermit, ‘Friendship’ with Fozzie, etc.). My personal favorite is when Uncle Deadly pops up and, from the song ‘You’re Just In Love’, sings, “I hear singing and there’s no one there,” to which Merman responds, “You would.” Perfect comedic timing on Ethel’s part.

The second number is so very fitting. Fozzie’s feeling discouraged by episode’s end, and Merman breaks into ‘There’s No Business Like Show Business’ to lift his spirits. My inner-Broadway nerd will be quick to tell you that it’s utterly perfect in its delivery. Normally a big, brash number throughout, Merman sings the first verse and chorus gently; sentimentally, almost. The Muppets gather around her, spellbound by her presence, words, and voice. Then, halfway through, Merman transforms it into the grand number it’s known for being, giving the episode a big Broadway finish. Just watch:

Honestly, you couldn’t pick a better song to wrap this episode with. The entire point of The Muppet Show is a gang of friends attempting to put on a show every week, and while sometimes they struggle and almost don’t succeed, the Muppets truly know that there is no business like show business.

The backstage segments mostly revolve around Fozzie bringing his (incredibly short) agent, Irving Bizarre, around to negotiate a contract for the comic bear. Kermit makes a lot of short jokes and tricks Irving and Fozzie into agreeing to a raise of what Fozzie currently makes “times ten.” Since Fozzie is making nothing, the two then realize that ten times nothing is still nothing, which Irving claims he “gets ten percent of.” These segments hold up well but, unfortunately, are sort of forgettable after you finish watching the episode. 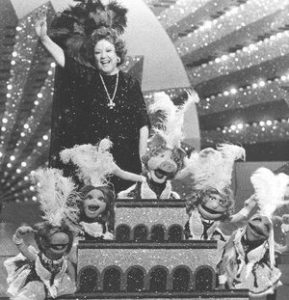 We also see a bit of a dynamic between Merman and Piggy; their relationship does not overpower the entire episode, nor does it necessarily pit women against one another. As most fans know, Piggy isn’t exactly the best when interacting with other ladies, but in this episode, while a touch jealous of the guest star, Piggy and Merman play off of each other rather nicely. Piggy tries to butter her up during the Talk Spot to get singing tips, and at the end of the episode she brings out flowers for Merman. The best moment, however, is during the Merman Medley when they spar off with ‘Anything You Can Do’, the perfect number for these two divas.

Then there are three stand out acts that hold their own and have nothing to do with Piggy, Merman, Kermit, or Fozzie – the central characters of this episode.

First is the classic sketch “Java.”  Besides its appearance on The Muppet Show, “Java” was performed a number of times back in the 60’s and 70’s. It was performed on Fanfare, The Ed Sullivan Show, The Today Show, and The Tonight Show, ranging from 1965-1979. There’s a simplistic nature to this act – two tubes doing a dance and clashing in their styles – but in its simplicity, “Java” stands the test of time. There’s great physical comedy in this segment: the way the little one dances over-excitedly, how the bigger 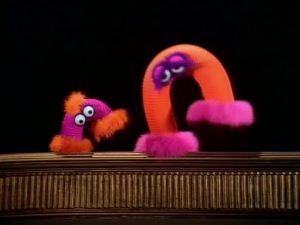 one stomps on him and pushes him off screen without missing a beat, then, of course, the fire extinguisher ending. It’s an act from The Muppet Show that will never get old.

Then we get our first Muppet Show appearance of Miss Mousey, previously seen in The Muppets’ Valentine Show. She sings “Don’t Sugar Me” – originally a UK spot. I have memories of, in the past, really not liking this song very much and finding the segment strange. This time around, however, the song kind of grew on me. Maybe it’s because Jerry Nelson’s voice is just too darn good. I still don’t fully understand why she’s singing to Statler and Waldorf, but meh. Stranger things have happened on this show.

Finally, we have The World’s Funniest Shadows, the first ever segment of a guest puppeteer having their own work featured on The Muppet Show. The guest is Richard Bradshaw from Australia, who uses shadow puppets to display funny scenarios. He has two set ups – a ladder + slide and a tight rope – and he shows an ostrich, a mouse, and a hippo climbing on top each. He gets to play with the movement of each animal, showing the difficulties of interacting with the ladder and tight-rope – especially for the hippo.

Lamest Joke: “Kermit, you were at the opening night of Gypsy? Come to think of it, I did hear some croaking in the audience.” Oh Ethel. 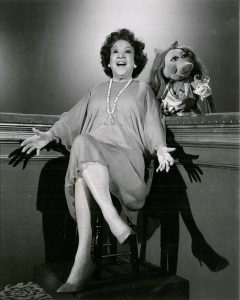 MVM (Most Valuable Muppet): Miss Piggy’s got some great moments with Ethel Merman, both during Kermit’s Talk Spot and at the end of the episode, and the choice to have Merman and Piggy sing “Anything You Can Do” was genius. Plus she karate chops Irving Bizarre, who I’m not the biggest fan of. So Piggy’s got my vote for MVM of this episode.

Coolest Puppetry Effect: The glass in Piggy’s hand shattering when Merman hits the high note during the Talk Spot.

Most Dated Joke: “Piggy, why would anyone want to hear you sing Mrs. Merman’s songs when Mrs. Merman is here to sing them herself?” “Well… since I’ve rehearsed them, why don’t I just do them and call it a tribute to Irving Berlin.”

First Appearance Of…: This is the first appearance of Miss Mousey – her only appearance in all of season one.

Musical Highlight: I’m a sucker for big Broadway numbers, so I’m going with the Merman Medley.

Missed Opportunity: This has very little to do with actual Muppets, but the fact that they had Ethel Merman on and they didn’t include either ‘Rose’s Turn’ or ‘Everything’s Coming Up Roses’, even in the big ol’ medley, is kind of disappointing. I know they covered a ton of her repertoire but still NOT ENOUGH GYPSY, I SAY.

Most Classic Moment: I mean, it has to be “Java.” It’s one of the most identifiable sketches from the show’s run. Not a single core Muppet in sight, but anyone who knows The Muppet Show well enough would be familiar with this segment in a heartbeat. 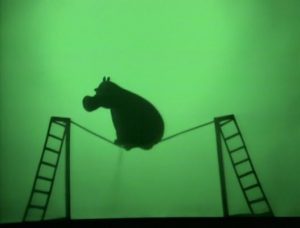 Should-Be-Classic Moment: I kind of think that it should go to The World’s Funniest Shadows, just cause I wish more people remembered the segments where Jim brought in other puppeteers to showcase their work.

Obscure Character Watch: There were quite a few obscure characters in this episode! Besides the rare season one spotting of Miss Mousey, there’s also the Two-Headed Singer in the Merman Medley. Leo from The Muppet Meeting Films and a Koozebanian Phoob are in the audience of Fozzie’s comedy act, and when the crowd flees, the last Muppet to be seen leaving is Mahna Mahna.

Adultiest Content: “I don’t want to be your agent, I just want to handle ya.”

One More Thing…: This is the only episode of the whole first season to not feature an “At The Dance” segment.

Okay, One More Thing: In the ending number, it’s the first time we ever see Janice with her long, blonde hair and not the curly, brown wig! Fer sure! 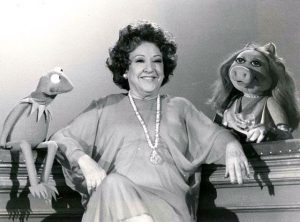 Click here to show off your crazy awesome vibrato on the Tough Pigs forum!