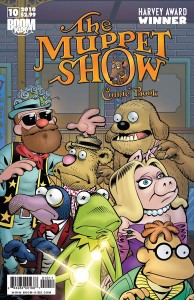 It seems like you can’t swing a dead cat around here without hitting new Muppet comic books! Not that I’m complaining, mind you. I don’t even mind that dead cat smell. I’m pretty happy to get new pages from writer/artist Roger Langridge, although I’m sure it’s just going to pose the problem of finding new ways to say how great he is. What a jerk!

When I first saw the cover to this comic (no, not the one on the right, this one), my first thought was, “Oh… mummies again? Eh.” Well, I guess Roger Langridge heard my nonverbal utterance, because it turned out that the original undead cover was sliced up and retooled to get rid of the toilet papered zombies and insert the latest Muppet Show guest star: Howlin’ Jack Talbot.

Speaking of the updated cover, I was excited to see that lycanthropic Rowlf the Dog, which would certainly give us our first Rowlf-centric storyline in any medium in I-don’t-know-how-long. I’m sad to say, that’s not Rowlf, just a man-eating were-beast who happens to look like a feral version of our piano-playing friend. Sad news for Rowlf fans, but good news for Team Jacob!

In the issue, the old rocker Howlin’ Jack Talbot guest stars on The Muppet Show, and the Electric Mayhem act as his groupies/fanboys. But unbeknownst to them, Howlin’ Jack has a spoooooky secret! And it might have something to do with that wolf-like dog who shows up every time he disappears. Coincidence?? Or something more mysteriously lupine?

Among the sketches we get to see: A cute reimagining of Little Red Riding Hood, with a giant chicken in place of the Big Bad Wolf. Muppet Labs attempts to cure Beaker’s baldness. The triumphant return of “Link Hogthrob: Monster Smasher”, in which Link, Miss Piggy, and Dr. Strangepork attempt to exterminate an adorable rampaging beast. And of course, since the guest star is a musician (albeit a fictional one), he “sings” three songs in the course of the issue. Chances are you won’t have any of them stuck in your head at the end of the day. 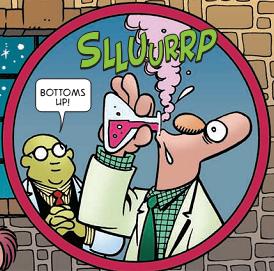 Predictably, The Muppet Show Comic Book #10 is once again a big ball of awesome. The story isn’t the most complicated in the world, but I’m happy to see the Electric Mayhem get their turn in the spotlight, along with the requisite laugh-out-loud moments, familiar characters, and that old school Muppet Show feeling. I can confidently say that Muppet Mash is a winner.

Winner though it may be, Muppet Mash will still come to an end next month with what looks to be a Frankenstein-related story. Will it top the vampires, mummies, and werewolves that we’ve already seen? We’ll let you know by the next full moon!