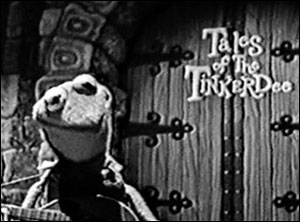 All right, today I write some final reflections on Tinkerdee. Is it too late for me to say that I really liked it? That may be kind of obvious from the reams of text I’ve posted about it this week. So I’ll just skip the “review” part of this review, and go straight for the historical context.

So, 1962: Henson has just finished his successful run of Sam and Friends, which ended in ’61. He’s done a lot of guest spots on variety shows, and he’s begun regular appearances on the Today show. He’s been doing a huge series of commercials for Wilkins Coffee in DC, and he’s been booked by Purina Dog Chow for national ads. He’s growing in confidence and recognition as a puppeteer and as an artist.

But, so far, he’s yet to produce a narrative longer than five minutes. The variety-show sketches and Sam and Friends skits are brief and punchy, and his Wilkins commercials proved that he can make a memorable sales pitch in ten seconds. But he’s never really had the scope to develop a full narrative.

So Tinkerdee was Jim Henson’s first story. Henson wanted to prove to television producers that he had the ability to hold an audience’s attention for a whole half hour. He wasn’t just a clown that could entertain the viewers for three minutes between singers on Ed Sullivan; he was a storyteller, who could create characters and situations that people could really care about.

As in the early days of Sam and Friends, Henson turned to Stan Freberg’s comedy records for inspiration. Freberg was a radio comedian who became famous in the 50’s for his soap opera spoof, “John and Marsha,” and his parody of Dragnet, “St. George and the Dragonet.” You may not recognize the names from Freberg’s 1957 radio series — Daws Butler, June Foray and Hans Conreid — but you’ll certainly remember them as the voices of Huckleberry Hound, Rocky the Flying Squirrel and Captain Hook. In 1961, Freberg brought all these luminaries together to record his most accomplished comedy album, Stan Freberg Presents the United States of America. Henson was a big fan of Freberg; the early episodes of Sam and Friends were often just puppets lip-synching to Freberg records. Henson’s own original sketches were close cousins to Freberg’s literate, verbal satires.

So when Henson had his first chance to produce a sustained story, he continued to follow Freberg’s example. Tinkerdee sounds like a Freberg comedy album, with lots of sound effects, running gags and dreadful puns. And, like Freberg, Henson (and partner Jerry Juhl) developed an anarchic style of storytelling that valued energy and punchlines over sensible narrative. In Freberg’s work, comedy was always more important than logic, and Henson and Juhl followed this grand tradition.

Tinkerdee’s story is driven by Taminella the witch, and her efforts to crash the Princess’ party and steal her presents. The witch is the most intelligent, witty character, and we’re invited to sympathize with her struggles. The King, Princess and Prime Minister just float through the story, getting locked in closets and then released, but never really having much of an emotional response to their situation. Gwendolinda spends most of the show looking for Santa Claus, but never seems bothered that she can’t find him. The King gets exasperated with the party preparations, but he doesn’t have much to lose. It’s Taminella who gets emotional highs and lows, victory and despair. And she’s the one who gets the most screen time — in fact, for the second and third acts, she’s hardly ever off camera.

Tinkerdee invites us to go beyond the traditional fairy tale cliches and root for the villain. When Tammy gets her hands on the presents and passes them out the window to Charlie the ogre, her moment of triumph is much more satisfying than her comeuppance. (In fact, we never do find out what happened to those presents. For all we know, Charlie keeps them.) Essentially, Henson and Juhl take us into a skewed, farcical universe where it simply doesn’t matter if the Princess’ birthday party is ruined or not. What matters is that we’re having fun, running around, slamming doors and wearing one crazy disguise after another.

This lunatic vision gets watered down in Henson’s later fairy tale specials. Ten years later, Henson’s Frog Prince has a much more traditional plot, pitting good against evil for the sake of a boy-meets-girl romance. In The Frog Prince, Taminella is still dressing up in disguises and casting spells on princesses — but she’s more serious, and much less loveable. She has to be a real menace to Robin and the Princess, and the story turns on defeating her and breaking her spells, so that good can win, and Robin can marry the Princess.

Tinkerdee doesn’t really care if good wins or not. Princess Gwendolinda is a big drip, and nobody cares if she gets to keep her Italian hand-cut crystal bird bath or not. We’re certainly not going to be invested in her love life. Tinkerdee is entirely driven by Taminella’s lunatic energy, and the King’s grouchy fits of pique. It’s straight-up farce, and pure pleasure.

I can’t imagine that TV producers didn’t see the amazing comic energy in Tinkerdee. The pilot didn’t get picked up, but it wasn’t because the show wasn’t funny, or visually inventive. Unfortunately, it’s not clear how Henson and Juhl planned to sustain the show as a series. A half-hour of anarchic, Freberg-style farce was great, but when your main character ends up imprisoned in the dungeon, what do you do in the next episode?

A year after Tinkerdee, Henson landed a regular appearance on The Jimmy Dean Show as Rowlf — his first sustained, fully-developed Muppet character. Over the next decade, he got to tell more comic stories, starting with Hey Cinderella and The Great Santa Claus Switch. By the end of the 60’s, he was creating the Sesame Street Muppets, the most beloved children’s television characters of all time. The seeds planted in Tinkerdee were going to grow over the next few years into the most amazing things.

And now, we have a chance to go back and get a glimpse at where it all came from. Taminella may end up in the dungeon, but she’s the greedy, sarcastic grandmother of a long line of Muppet troublemakers, from Cookie Monster and Oscar to Miss Piggy and Pepe. She’s the witchiest witch of them all, the greatest sculptor in Tinkerdee, and a jolly old elf, all wrapped up in one. She’s witty, and angry, and triumphant. She’s amazing. She’s the Muppets.