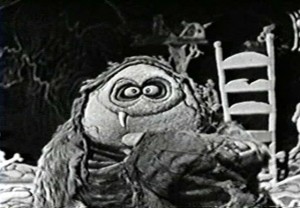 Okay, if you’ve read this far, then that means you’re an obsessed Muppet fan. Welcome. You’re among friends. So now I’m gonna go ahead and give you even more obsessive detail about Tinkerdee’s puppets and sets. Enjoy.

Taminella: As you can tell from the synopsis, Taminella the witch was the real star of the show. The plot revolved around her, and she’s on-screen for practically all of the second and third acts. Tammy is played with obvious gusto by Jerry Juhl, who at the time was Henson’s main partner, and who would go on to become the head writer for The Muppet Show and Fraggle Rock. Juhl’s affection for the character is really apparent; he’s having the time of his life playing Tammy. Juhl bowed out of the puppeteering biz in 1963, when Frank Oz joined Henson’s troupe, but Juhl returned to perform Taminella again in the 1971 special The Frog Prince. The Tammy of Tinkerdee is a lot friendlier and funnier than the more threatening Frog Prince version. Taminella also appeared in Henson’s “Shrinkel and Stretchel” commercials for PakNit laundry products in 1965.

King Goshposh: Performed by Jim Henson, Goshposh became the standard King for the 70’s Muppet fairy tales, showing up in Hey Cinderella, The Frog Prince, and the Twiggy Muppet Show episode. The King puppet was rebuilt for those later appearances, but he’s very recognizably the same character — and in Tinkerdee, as in Hey Cinderella, he walks around with a lit cigar in his mouth.

Kermit: Performed, of course, by Jim Henson. As in many Muppet specials, Kermit’s main function here is just to remind the viewer that these are Jim Henson’s puppets. But there’s no small parts, only small frogs — and Kermit’s appearances in Tinkerdee are especially memorable because he actually sings all of his lines of dialogue. Besides the choruses quoted above, he also sings every line of regular dialogue he has. He wears a minstrel’s tunic with a ruffly collar, so I can’t tell if he has his pointy frog’s collar by this point.

Prime Minister: This is the guy in the picture in The Works who looks kind of like Scooter. I don’t know who performed him; the only voices I recognize in the special are Henson’s and Juhl’s. This puppet wasn’t used again — this role in Cinderella and Frog Prince was taken by Featherstone — but his design obviously informed the design of Scooter more than a decade later.

Princess Gwendolinda: A running gag in the special is that Gwendolinda is the loveliest girl in the kingdom — so it’s unfortunate that she’s actually the only bad-looking puppet in the production. She’s a generic little girl Muppet with a curly blonde mop and disturbingly large eyes. She’s probably performed by Robin Reed, since I don’t think Jane Henson ever performed a character’s voice.

Palace Guard: The guard appears in only one scene, when “Santa Claus” is trying to gain entrance to the palace. He’s performed by someone other than Henson and Juhl. The notable thing about the Guard is that he was obviously built from the old Yorick puppet from Sam and Friends. He’s wearing a guard’s helmet over his eyes, but the mouth is visible, and it’s clearly Yorick.

Charlie the ogre: The only “human” figure in the show is Charlie the ogre, who we see first as filthy, ragged legs (in Tammy’s cave and at the palace gates) and then as a club-wielding arm (through the window of the palace ballroom). The voice is by Henson, in a kind of Link Hogthrob groan. The actual body parts are almost certainly not Henson or Juhl, since he often appears in the same shot as other main characters. The illusion is really clever and oddly convincing; you actually start to believe that there really is an enormous ogre just off screen.

The sets: Using the production’s financial and technical limitations as a challenge, Henson created beautiful, stylized sets that look like a storybook come to life. The sets are all just flat, painted backgrounds, but Henson uses the two dimensional sets in interesting 3-D ways. For example, Taminella’s cave has a painted flat with stalactites and spider webs — but there are big holes in that background, and you can see another painted background behind it with the back of the cave wall. The multiple flats are so obviously two dimensional that it creates a kind of pop-up book effect. It’s really quite beautiful.

The soundtrack: It looks like the Tinkerdee soundtrack was recorded first, almost like a comedy album with a lot of running footsteps and other sound effects. Then the puppets were performed to lip-synch to the soundtrack. Henson voices three characters — the King, Charlie, and Kermit — who often appear in scenes together. However, if Henson’s characters didn’t appear together, you wouldn’t really be able to tell that the voices were recorded first. The lip-synch is much more skillful and precise here than in the earlier Sam and Friends sketches.

The color: The Tinkerdee photos in The Works are in color, but the copy at the Museum of Television and Radio is in black and white. I don’t know if the show was originally shot in color or not.

Tomorrow: But was it any good?
A discussion of Tinkerdee’s strengths,
and what it meant for Henson’s later work…