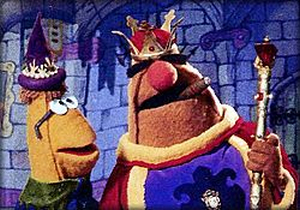 The Prime Minister stands in the ballroom archway, announcing each present as it’s received. Behind him, through the archway, we see Taminella the witch — still dressed as the Princess — and behind her, the window where Charlie the ogre waits.

“Well, I’m the Prime Minister, of course!” Tammy sputters. “No, you’re not!” the Princess says. “I just talked to the Prime Minister a minute ago.” Tammy desperately tries to cover: “Oh.. eh… well, in that case, I’m the lovely Princess Gwendolinda!” This one doesn’t go over well with the Princess. Tammy finally admits that she’s Taminella the witch, and calls for Charlie to grab the Princess. Charlie’s hand comes through the window and clutches Gwendolinda, and Tammy takes the opportunity to do a quick spell — that freezes the Princess solid!

Under Tammy’s spell, Princess Gwendolinda can’t move a muscle, until someone says the words that break the spell: “My uncle was bouncing through the ice cream on his pogo stick!” Tammy covers the Princess with a little powder so she’ll look like a statue. Then it’s back in the closet as the King approaches…

The King is taken aback as he sees the “statue” of Gwendolinda. Then Tammy pops out of the closet in a new disguise, wearing a beret and a droopy black mustache, and holding a cigarette. The witch cries, “BONJOUR, m’sieur! You like my work, no?” The King is stunned. “I am Pierre!” Tammy shouts. “Zee greatest sculptor in Tinkerdee! I have joost completed zis marble statue of your daughter which I geeve to you in honor of her birzday.” The King is impressed: “It’s lovely! Looks just like her.”

The King wants everyone to see the statue, so he calls for the Prime Minister and Gwendolinda. Tammy quickly ducks back in the closet and comes out in her Princess disguise. The King shows the fake Princess the statue. “My goodness!” the witch says. “It looks just like me!” The Prime Minister sniffs, “It looks more like you than you do yourself.” The King is having so much fun at the party that it reminds him of the last party he gave — an ice cream party, when his uncle insisted on bringing his pogo stick. The King says the magic words, breaking the spell — and the statue of Gwendolinda comes back to life!

“It’s WITCHCRAFT!” Taminella cries. “She’s a WITCH!” The Princess tries to explain that she’s the princess, and Taminella is the witch. The King can’t tell the difference between them, so he remembers an old Tinkerdee saying: if you hit a witch in the face with a custard pie, lightning will strike. “That’s an old wives’ tale!” Tammy sputters. “Why, I heard it from an old wife just the other day!”

Two pies in the face later, the King discovers which is the Princess and which is witch. He sentences Taminella to imprisonment in the dungeon, where she’ll be fed all the peanut butter sandwiches. “You can go home as soon as you’ve eaten all sixty-seven THOUSAND of them!” Then the Prime Minister announces that the guests are arriving, and the King and Princess go off to the party.

Kermit takes us home with a concluding song:

And so the Witch was overthrown.
She cried and screamed and muttered.
But to this day, in a dungeon cold,
She’s caged, and peanut buttered!

The castle now is filled with joy.
I bid farewell to thee.
Until the next time I resume
My tale of Tinkerdee!
The Tale of Tin-ker-dee!