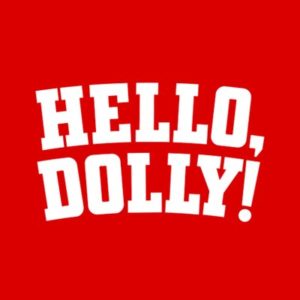 Not so very long ago, I saw the musical Hello, Dolly! on Broadway. It was a lot of fun, and it starred Muppet Show guest star Bernadette Peters, who was predictably delightful.

Early in the second act, a quartet of characters sings “Elegance,” which is a song about how fancy they perceive themselves to be. I immediately recognized it, but not because I’ve seen the show before, because I haven’t. And not because I’ve seen the 1969 movie, because I haven’t. I had never seen any version of Hello, Dolly! before. No, I knew the song from its performance by a very different group of singers: a bunch of cows.

Sorry, I mean herd of cows. Yes, I know you’ve heard of cows.

As I’ve discussed here before, The Muppet Show was great at staging entertaining musical numbers, and even better at staging those numbers with weird twists that make them funnier than they would be on any other variety shows. I think everyone would agree that cows are not among the more elegant animals on planet Earth, so naturally The Muppet Show had a group of them perform a showtune all about elegance. THAT’S THE JOKE.

I couldn’t tell you which Muppet Show episode the “Elegance” number appears in, but the gag was so silly and memorable that it’s stuck with me for years. That’s why, when those Broadway actors started singing, I immediately jumped up and shouted, “It’s the cow song!” And as I was being tossed out onto 44th Street by an exceptionally beefy usher, I reflected on how the Muppets have affected my musical knowledge. 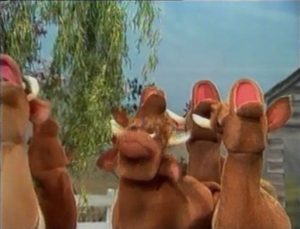 Just skimming the “Muppet Show Songs” category on Muppet Wiki, here are a few examples that jump out at me: 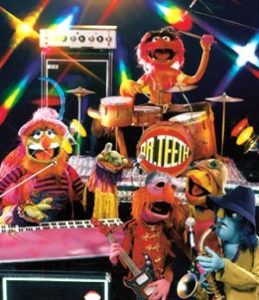 Because I heard the Muppet versions of the songs as a youngster, I knew them right away when I later heard them in context. In most cases, the Muppet performances have permanently skewed my perception of the songs. I can never hear Peggy Lee sing “Fever” without picturing Rita Moreno bashing Animal’s face with cymbals. “Lullaby of Broadway” will never not make me think of Eskimo pigs. Actually, I haven’t seen 42nd Street, so for all I know, the song is in fact sung by Eskimo pigs in that show. Please don’t tell me otherwise.

Also, as far as I’m concerned, “Mr. Cellophane” is a Ben Vereen song and “New York State of Mind” is a Floyd song. In fact, while Billy Joel’s original recording is fine, I think Floyd’s is better. I’m tempted to say the same of his performance of the Beatles’ “While My Guitar Gently Weeps,” but I had already heard the Beatles’ version before I heard Floyd’s, so it doesn’t qualify for this list. But yeah, Floyd is really good at songs.

Of course, any version of “Tenderly” not performed by the Electric Mayhem sounds all wrong – much too slow, and too easy on the ears. Which is funny, because the whole point of that Muppet Show number is that they’re taking a beautiful, somber love song and turning it into a rock cacophony. Dr. Teeth’s introduction (“We’d like to think of our group as being able to play more than hard rock…” ) and the lyrics helped me understand the joke, even as a kid. But still, the Mayhem guaranteed that I would be disappointed any time I heard the song anywhere else. 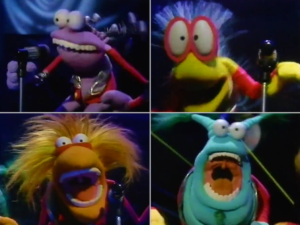 This phenomenon extends beyond The Muppet Show to a few other Muppet productions as well. When I hear the Pointer Sisters sing “The Neutron Dance” on the “Greatest Hits of All Time” radio station, I can’t help but wish they were a quartet of crazy-looking, fluorescent-colored wackos, like the Extremes on The Jim Henson Hour. And when the next song on that radio station is “Dancing with Myself,” it’s pretty boring because I’m only hearing one Billy Idol instead of seven Gonzos, like on Muppets Tonight.

It’s not so common for an artist to do a cover of a well-known song that supersedes the original in the minds of the listeners. But the Muppets have done it time and time again. Now, you might say to me, “Wait a minute — you only feel that way about these songs because you’re obsessed with the Muppets anyway, and you view the whole world through through a Muppet-shaped lens!” In response to you I would say, “Shh… I’m trying to conclude this article.”

I guess what I’m really trying to say is this: The Muppets have permanently ruined a lot of great songs for me. And I couldn’t be happier about it.

What about you? Which classic songs did you first come across as Muppet covers? Let me know in the Facebook comments, on Twitter, or on the Tough Pigs forum!

P.S. The Muppet Show covers my knowledge of popular songs up until 1981. After that, my awareness of most pop songs is because “Weird Al” Yankovic did parodies of them.

Click here to be an elegant cow on the Tough Pigs forum!