This past weekend, Sesame Street aired an episode with siblings as the theme.  I’m guessing it played as an interesting enough episode for kids who have siblings, and a fascinating glimpse into another world for kids who happen to be the only child.

For Sesame Street nerds, it was exciting for one reason: Bert’s brother Bart!  He showed up in the teaser that was released in advance on YouTube:

Some Sesame fans were amused but surprised: Bert has a twin brother?!  Meanwhile, those of us who either a) have weird memories, b) spend a lot of time watching old clips from the show online, or c) both, were like, “Hey, it’s Bart!  Welcome back, guy!  It’s been so long!”

Yes, that’s right.  Like Linda Hamilton and Ashton Kutcher, Bert deserves a spot on any clickbait list of “Celebrities You Never Knew Were Twins.”  See, Bart first appeared in a sketch way back in 1974.   If you’ve never seen it, take a look:

As you can see, the educational curriculum goal of this segment is to teach kids that, although siblings may look alike, they are not alike in every way.  But more importantly, it teaches us all once again that Frank Oz is hilarious.

As far as I know, Bart hasn’t been seen again since then.  A few years later, it was established that Bert has a nephew named Brad, an adorable little guy who most memorably appeared in a bath time sketch, and there has been much speculation that he’s the son of Bart.  But I don’t believe there’s any 100% conclusive proof.  For all we know, Bert could have another pointy-headed, cucumber-y nosed brother or sister somewhere that we just don’t know about.  So Bart’s whereabouts remained unknown.

Until now!  The brief cameo in the episode’s introduction was all the screen time Bart got (the street story was about Abby and her stepbrother Rudy), but it was still great to see him, and even greater to see him wearing plaid and going “Hwa hwa hwa.” 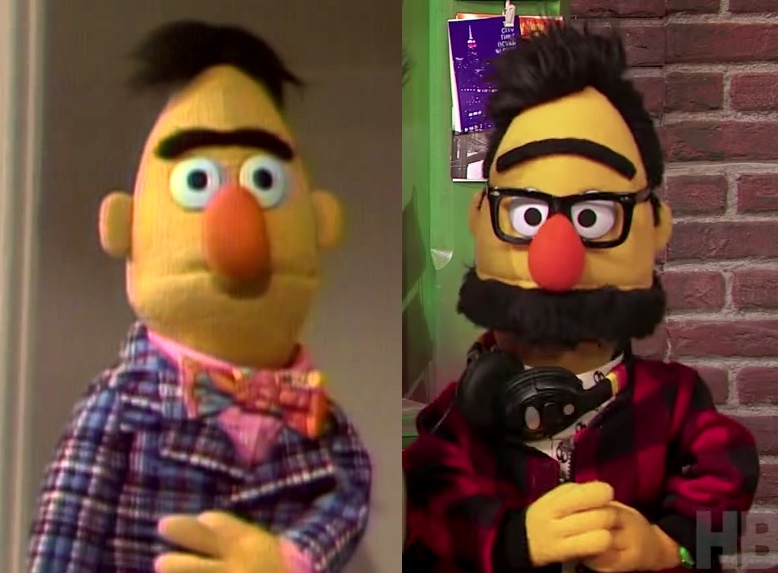 Bart, then and now

However, his appearance does raise a few questions.  For example, last time we saw him, he had the same small “bushy-bush” of hair as Bert, but now he has a full head of lustrous dark locks.  Did he get hairplugs?  Is he wearing a toupee?

Also, Bart now wears glasses, where he previously wore none.  Was he wearing contacts in 1974, or has his eyesight merely gotten worse?  Or is he just wearing those thick frames in an attempt to look trendy and cool?  And if you really want to get into it: Is he still a salesman? What music is he listening to on those headphones?  Does he still have the same floppy, soggy arms as Bert, or has he taken up a weightlifting regimen to reduce that floppiness and sogginess?

Yes, Bart’s return was wonderful and unexpected.  But it remains a tease, and we’re left wanting more.  More Bart, I say!  I propose a future episode, entitled “Everything You Ever Wanted to Know About Bart But Were Afraid to Ask,” in which we learn so much about him that we get sick of him and never want to see him again.

Brad should be in it too.

Thanks to Tough Pigs’ own Shane and Scott for alerting us to this important story. Click here to admire Bart’s cucumber-y nose on the Tough Pigs forum!