The following article was written by ToughPigs’ own Julia Gaskill.  Thanks for all your hard work, Julia!!

One of the things I admire about Muppet fans is their wonderful powers of observation. We Muppet fans are a keen, astute folk when it comes to observing the beloved movies, shows, and specials we so cherish. Not much can get past us. We notice when a Muppet is rebuilt, even when it’s only the slightest tweak. We notice when the performer’s voice is off or changes in pitch. We notice the throwbacks to older productions and references to characters from days of Muppet yore. We notice hair. We notice whe-

Okay, at least, I notice hair. Particularly Steve Whitmire’s hair, which I realize is a strange thing to admit to, but hear me out.

Sometime late last December I was suddenly struck by the realization that Steve Whitmire’s hair has changed quite literally every decade that he’s worked with the Muppets. Did I notice this because of my oddball crush on Steve throughout the eras? Mayhaps, but that doesn’t make it any less true. He has four very prominent hairstyles through the 70’s to the present time, and I see it as my honor – nay! – my civic duty to explain each style to all of you. 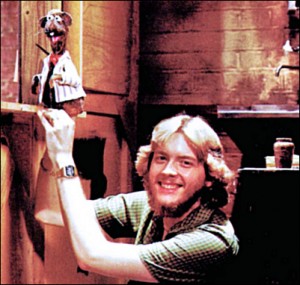 Such a spritely, enthusiastic whippersnapper! This photo was taken sometime on the set of The Muppet Show in the late 70’s. As we can see, Steve’s hair is relatively short in comparison to future years. This may very well be the shortest his hair has ever been, because if there’s anything this man doesn’t lack, it’s hair (I wouldn’t be surprised if he he had been born with a full head of hair). He’s got quite a feathered look going on, which was the popular style back in the late 70’s/early 80’s (or so Wikipedia tells me), so it’s nice to know Steve was hip with the times. You go, young Steve, you groovy lad!

What’s important to keep in mind is that Steve first joined up with The Muppet Show in 1978. Most of the other performers and staff had been working with the Muppets for two years at that point, if not longer. Steve was only eighteen when he joined; a kid just out of high school. He was the youngest performer at the time, and certainly one of the youngest people on set. While I’m sure he had no problem fitting in right away, it was no doubt a nerve wracking experience at first to be submerged into an already tightly knit community (though he had definitely found his place in the gang by 1979). 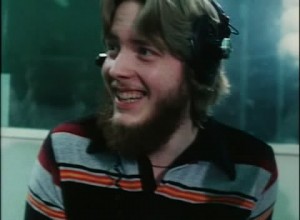 (I know this feature’s focusing on Steve’s hair, but I can’t go without mentioning that he’s also rocking a stellar Amish beard in the late 70’s. I like to think that, being the naive, new kid that he was at the time, he thought he could wage war in the ongoing epic Battle of the Beards that Jerry Nelson, Jim Henson, and Jon Stone were already competing in… or maybe he was just an eighteen year old kid who was excited that he could finally grow really awesome facial hair. Who knows.) 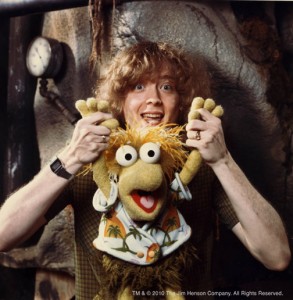 Ah the 80’s! A new decade, a new hairdo! Steve’s hair (and overall appearance) definitely took on a completely new look in the 80’s. To put it simply: his hair became quite poofy. In some pictures from behind-the-scenes of Fraggle Rock we can catch fragments of his transition: 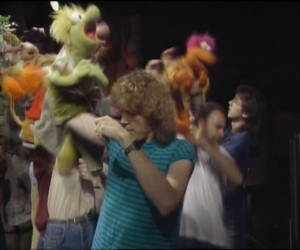 His hair continued to become shaggier and shaggier, until around 1985 when it became the fully formed frizzy fro frequently fortified fantastically for Fraggle Rock…! His hair really stayed this way up until Jim’s memorial in 1990, and then for a short period after. 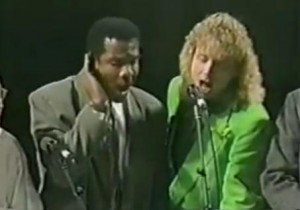 Steve was only twenty-one at the start of the 80’s (it’s nice to know while Steve was performing alongside some of the greatest puppeteers of all time, my greatest accomplishment as a current twenty-one year old is passing Biology 101 last Fall… just barely). Speaking as someone from this age bracket, I think it’s fair to assume that Steve may have still been discovering his look at the start of this decade… and that look just happens to look a whole lot like Wembley Fraggle. Seriously. They are the same entity. 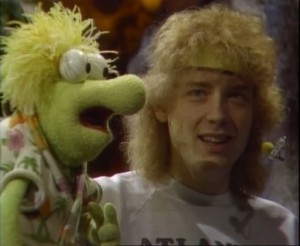 All Steve’s missing is a Hawaiian shirt and some bongos.

(Also, going back to beards, Steve’s face stays clean shaven throughout the 80’s. He must have thrown in his towel, knowing he’d never reign supreme in the ongoing Battle of the Beards (in my personal opinion, Jim was the true victor of that war.)) 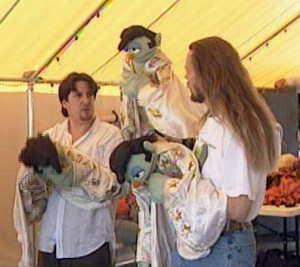 Most people who can identify Steve often associate him with his 90’s hair, i.e. his looooooooooong hair. As mentioned previously, his hair was still poofy at the start of the 90’s, but throughout this decade he let his hair grow; and grow it did. Here’s the growth rate from Christmas Carol (1992) to Treasure Island (1996): 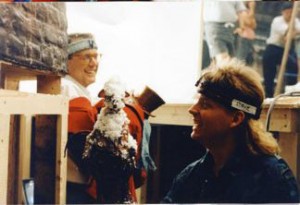 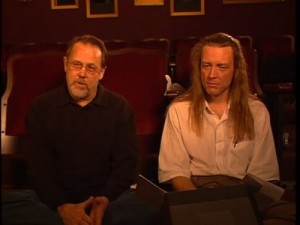 Quite a difference, don’t you think? Finally, his hair in Muppets from Space, at the tail end of the 90’s: 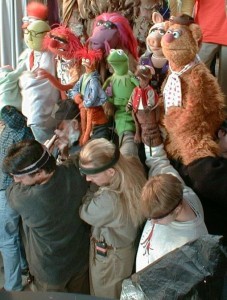 Steve was thirty-one at the start of the 90’s, and by now had established himself as one of the core Muppeteers. He undoubtedly felt comfortable at this point amongst his fellow performers, and maybe his long hair at the time was a reflection of that ideal. Also, we can’t ignore the fact that the 90’s started off on a humongously stressful note for Steve. I don’t want to delve into reasoning if his hair has any correlation with the taking over of Kermit, because I think that would truly be over analyzing the situation, but I feel it’s still important to note. 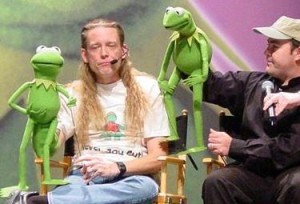 Finally, we come to the last stop on our journey, with Steve’s 2000’s hair: 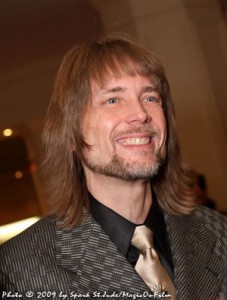 His new millennium hair is pretty much equivalent to his present day hair. His hair remained super long until sometime around 2005, or at least until after his Barnes and Noble appearance in 2003. The change of style can first be seen in Steve’s brief cameo (alongside Muppeteer buddy Dave Goelz) in The Muppet’s Wizard of Oz: 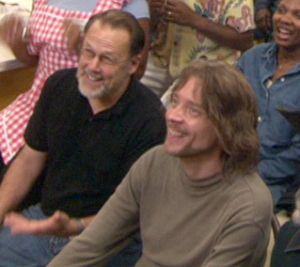 Steve’s hair, while still somewhat long, became noticeably much shorter when Oz was released. Why the haircut? Speaking from personal experience, long hair can be quite a pain to take care of, and the fact that Steve let his hair stay that long for the amount of time he did deserves a round of applause. Short hair is, after all, much easier to manage.

But out of all Steve’s hairdos, his current one baffles me. I mean… I don’t understand… how is his hair so straight? It’s pretty close in length to his hair back in the 80’s, which you now know was curly as all get out, but it’s no longer in its once frizzy state. Does he use a hair straightener? Did he once own a set of hair rollers to maintain his constant poof? This will, forever and always, remain one of the greatest Muppeteer mysteries of all time (at least in my book).

(And yes! The beard makes a comeback around 2002 during filming of A Very Merry Muppet Christmas Movie! He’s kept the same style of beard since then. Short and simple; a good look for him.)

Overall, since chopping this long, flowing locks to a much more manageable length, his hair has consistently stayed about the same since the mid-2000’s. 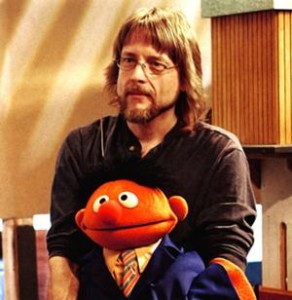 So what should we expect of Steve’s hair in this current decade, y’know, before we reach 2020? Shaved head? Mohawk? Blue hair? Cornrows? A-Line bob? Frosted tips?

All I know is that if I ever meet Steve one day, I’m probably going to feel obliged to apologize to him for analyzing such a simple thing as hair (it’s strange to understand another human’s head of hair better than your own). Maybe. Or maybe he’ll think it’s funny. And hopefully he’ll understand that while on the surface I’m analyzing hair, what I’m really doing is examining his growth as a person and the character of a man whom I strongly admire. Hair can tell us a great deal about a person’s place in life, and Steve’s certainly had an extraordinary one. Wherever his future endeavors may take him, I hope his hair remains a constant reflection on his personal state of being, no matter how he shapes and molds it to his liking.

But I’m really banking on the cornrows. 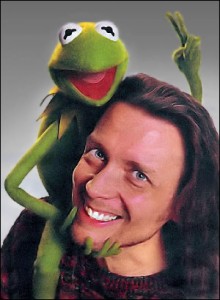 Click here to wash, rinse, repeat on the ToughPigs forum!