Statler & Waldorf: Not Secret, Not Policemen

The Secret Policeman’s Ball is a big, star-studded comedy show celebrating free speech in support of Amnesty International. It’s British-based, but the latest Ball was held right here in the States at New York’s Radio City Music Hall, and Statler and Waldorf were there doing what they usually do.  The Secret Policemen have posted a few video clips on YouTube… First, Statler and Waldorf are out of step with modern heckling:

And this one made me laugh out loud… It’s the old guys in the balcony, remixed!

I can only assume there’s more of these old men in the actual Secret Policeman’s Ball special… According to their Facebook page, it already aired on the BBC on March 9, but it’s available in the US on “Epix on demand.” I’m not sure what Epix is, but if you have access to it, demand Statler and Waldorf! 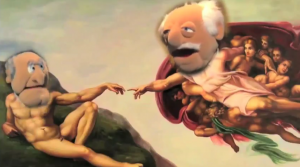 Thanks to Tough Pigs’ own Scott Hanson for the alert! Click here to wonder what’s so secret about it on the Tough Pigs forum!