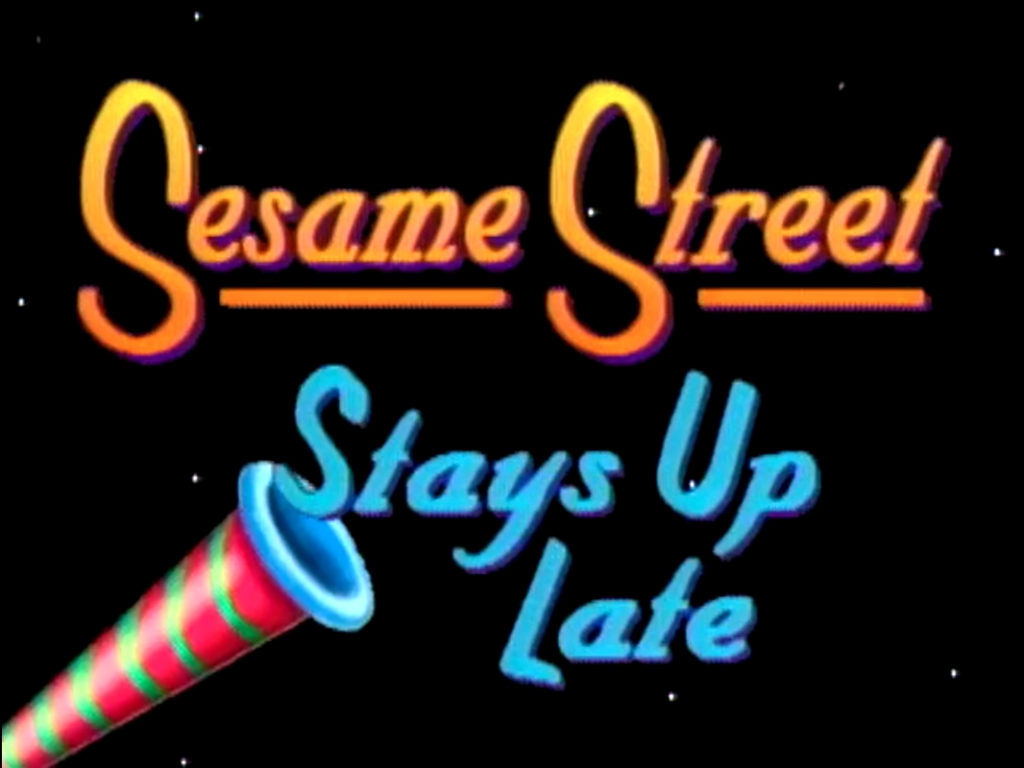 Hey, did you know that under the gigantic mound of Christmas specials (and somewhat smaller mound of Halloween projects), Sesame Street once devoted a whole special to New Year’s Eve? I mean, you probably did, because ToughPigs readers are smart like that. (Especially you! Yes, you!) So why is Sesame Street Stays Up Late the show’s only New Year’s Eve special?* Well, in honor of its twenty-fifth anniversary, I decided to answer that question: because it’s everything you need in a Sesame Street New Year’s special. And what better way to explain and celebrate a New Year’s special than with a countdown!

*Yes, I know Sesame Street recently did an episode about New Year’s Eve, but for dramatic emphasis, I’m keeping this to specials. 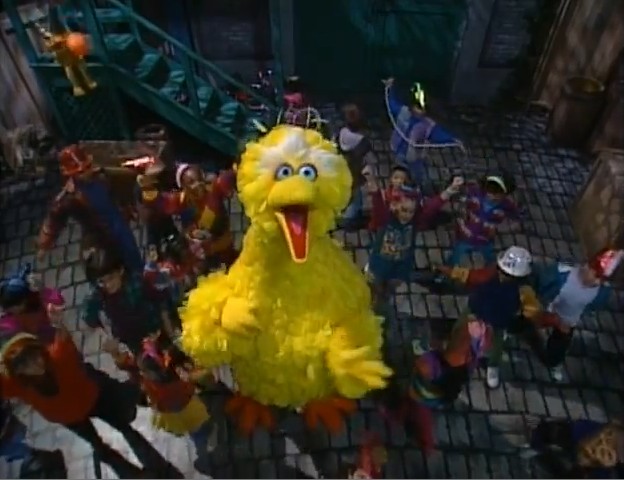 Boy, does this song bring back memories of New Year’s Eves past. I love how it captures what makes the night fun for children: partying, being able to make lots of noise, staying up late, and counting backwards from ten (it’s a holiday where you can actually use what you learn watching Sesame Street!). It’s a lot better than worrying about not being invited to parties or being invited to too many parties, planning menus, and figuring out if you want to dress casual, formal, or semi-formal. Man, kids have it good on New Year’s Eve! 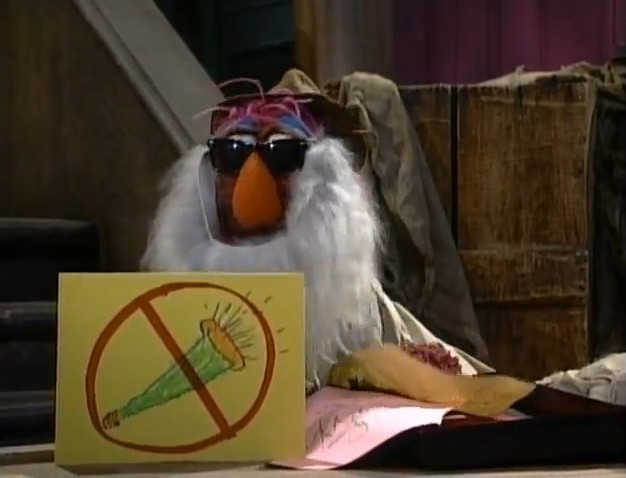 In the grand tradition started by Christmas Eve on Sesame Street, it’s another holiday special where Oscar the Grouch manages to mess with the mind of someone vulnerable. This time it’s Telly Monster, who learns from Oscar that when the year ends, so will everything he knows and loves. Of course, being that Telly is more than a year old and has lived through more than one New Year’s Eve, you would think he could put together that it simply isn’t the case. But we get to see Telly impersonate a government official, hide in a store, and generally freak out. And a neurotic Telly is a funny Telly. 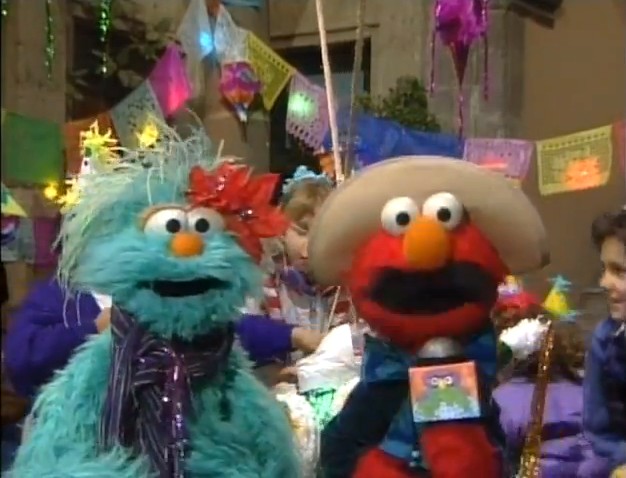 Throughout the ages, there have been pairs of Muppets that have a level of chemistry that gives them a legendary status. Ernie and Bert. Statler and Waldorf. Dr. Bunsen Honeydew and Beaker. And this special gives us another dynamic duo: Elmo’s Cousin Pepe and Rosita. I could listen to Rosita enthusiastically interrupt Cousin Pepe all day, and then hear Cousin Pepe gripe about being interrupted the next day. I will say, even though I never have, those who find Elmo annoying may find pathos in seeing an Elmo-resembling Muppet being so annoyed by someone else. 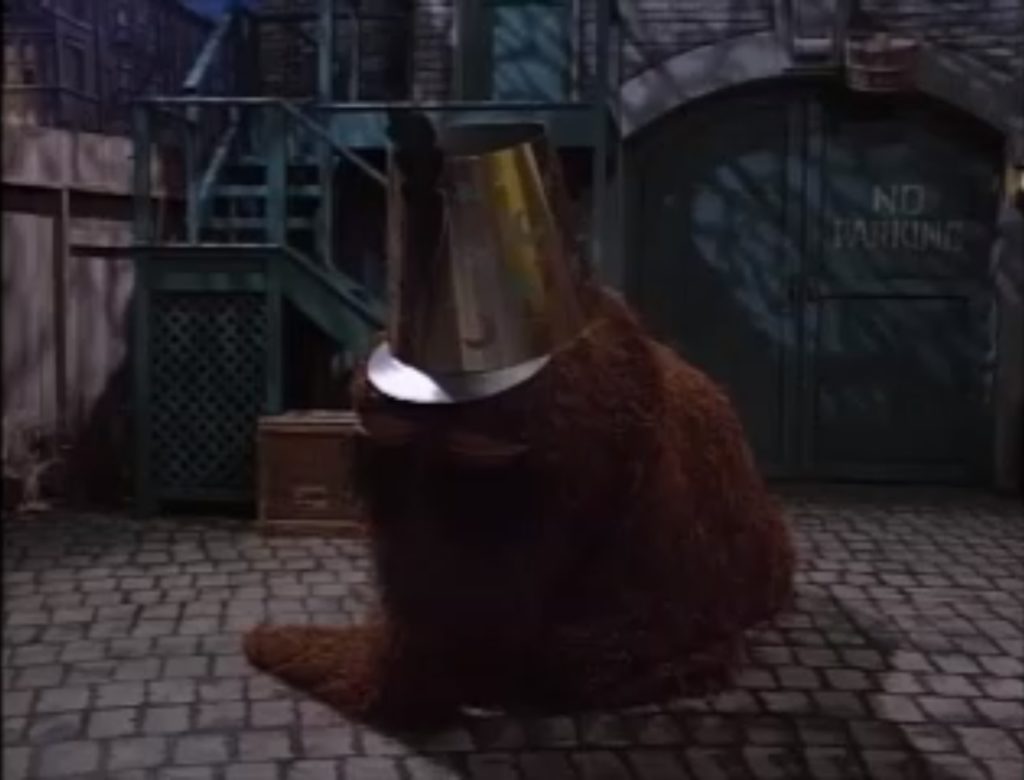 Okay, let’s be honest: in order to stay up late on New Year’s, who amongst us hasn’t decided to get our sleep elsewhere? New Year’s is a marathon, not a sprint! You have to be ready! I can totally relate to Snuffy’s plan. Between the Rose Parade and outdoor hockey on New Year’s Day, I need to need to pack in as much sleep as possible before the evening begins. On December 31st, don’t bother trying to reach me until 2 PM. At the earliest. 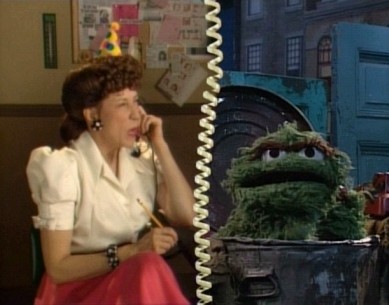 All the way back to her time on Laugh-In, Lily Tomlin’s character of Ernestine the Telephone Operator has been known for her sarcastic, grating personality and less-than-friendly customer service. Who better to appreciate it than a family of grouches? The irritation and frustration must be catnip to a grouch. And she even seems to like her customers, asking if she can join in any grouch New Year’s celebrations. She’d probably be the life of the party. 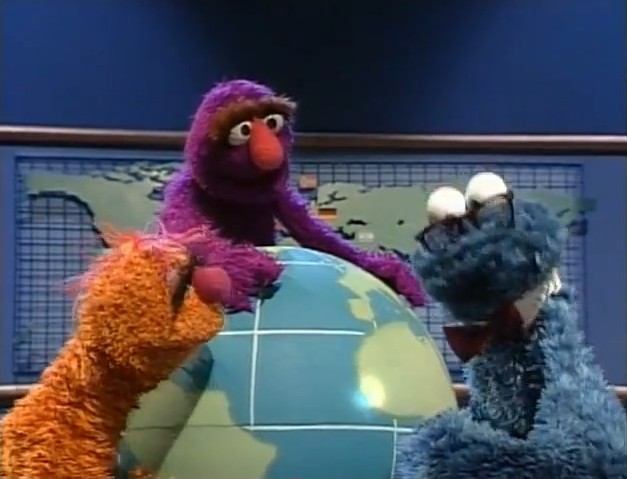 After Elmo learns that his cousin in Japan, Elmo-noske, has already welcomed in the New Year, Monster News Network presents a demonstration on how day and night work as Earth revolves. And of course, MNN turns to a leading scientific mind: Cookie Monster. He manages to pretty accurately explain why day and night don’t occur at the same time everywhere around the globe, but when asked why Earth revolves the way it does, he doesn’t have a clue. He eats a flashlight, and children are left confused, though not as to why Cookie Monster ate said flashlight. Spend more than five minutes around him, and it becomes pretty evident. 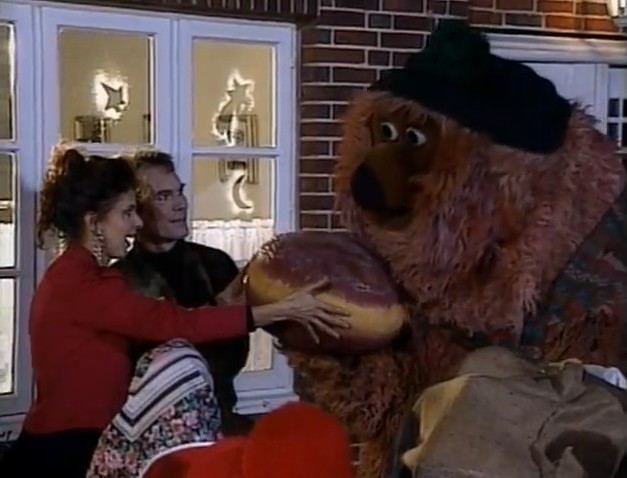 If you’ve seen the special, you know what I’m talking about. In the segment from Germany, Samson gets a “Samson-sized” donut. I want that donut. That is all. 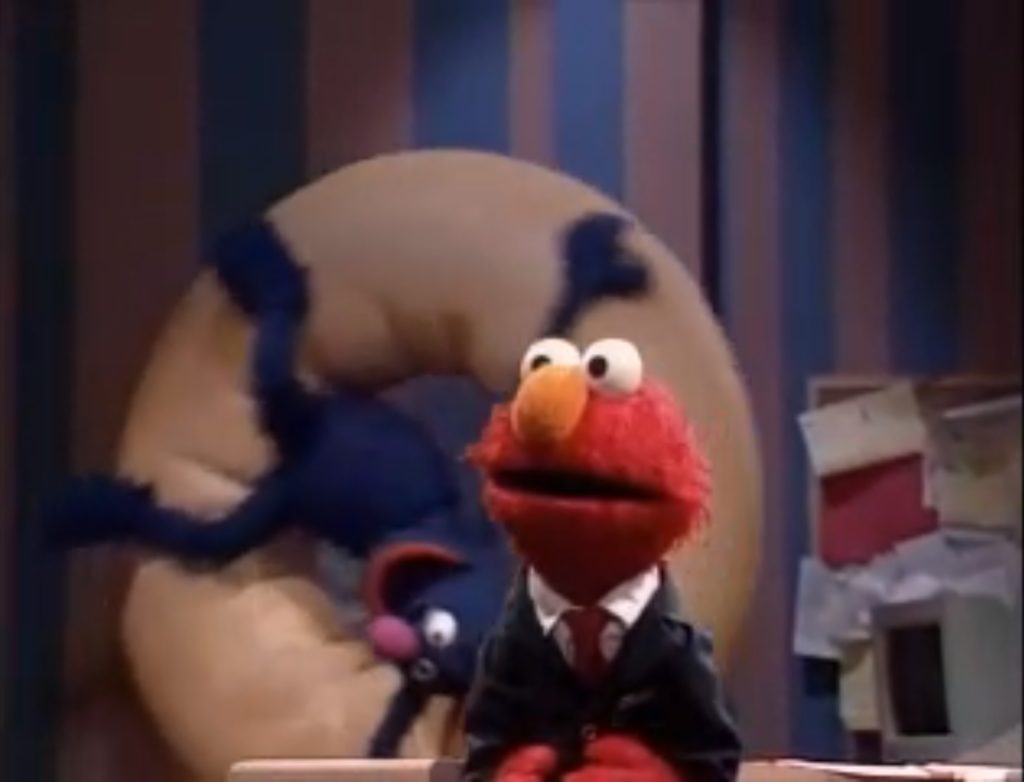 When the international correspondents send gifts to Elmo, someone’s got to deliver them, and naturally, Grover gets the job. He’ll swim from Portugal, ride a giant donut from Germany (I want that donut, too), and ski from Norway to deliver the goods, and all in one broadcast. That has to take Super Grover-like strength and endurance. Good for you, Grover. Take New Year’s Day off. 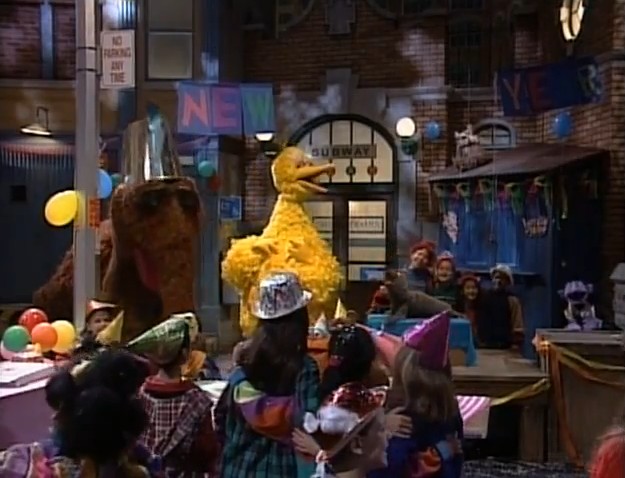 What a beautiful song. It’s sweet and emotional without being saccharine. And it’s what New Year’s is all about: being (physically or otherwise) with the people you care about, welcoming in a new year full of possibility. As long as we’ve got each other, we can handle whatever the coming year can give us. Bring on 1994 2019! 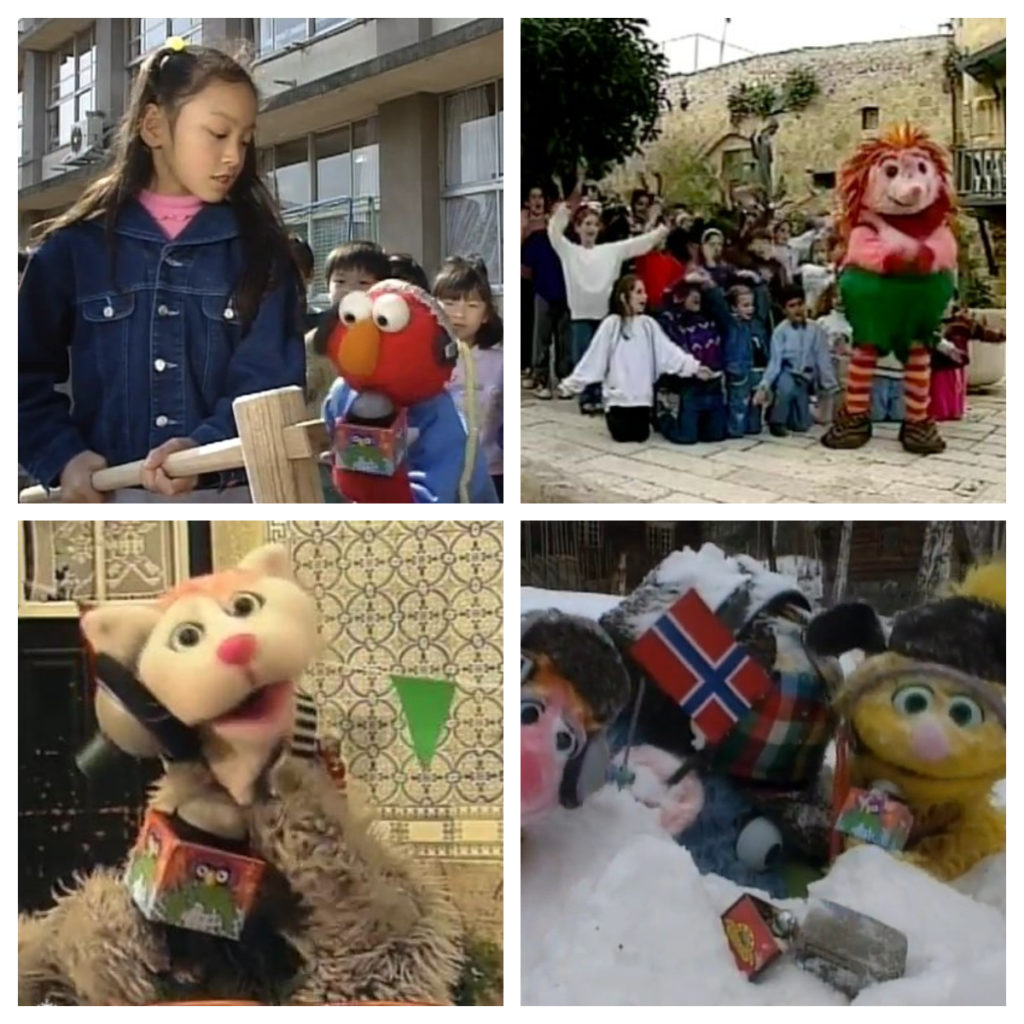 As great as the domestic product is, I think Sesame Street’s greatest impact is in its ability to share its format to entertain and educate people from around the globe. Sesame Street Stays Up Late allows that legacy to come back to American audiences and show them that the world is an exciting place, and that our differences are special and should be shared with love and hope. Sesame Street shows you how to be a good neighbor, and this special shows you that the neighborhood can be the whole world.

So, there’s my countdown! As 2019 begins, I hope it’s a year of peace, kindness, and prosperity for all of you. Come to think of it, this special kind of kicked off a big anniversary year for Sesame Street. I wonder what this coming anniversary year will bring… 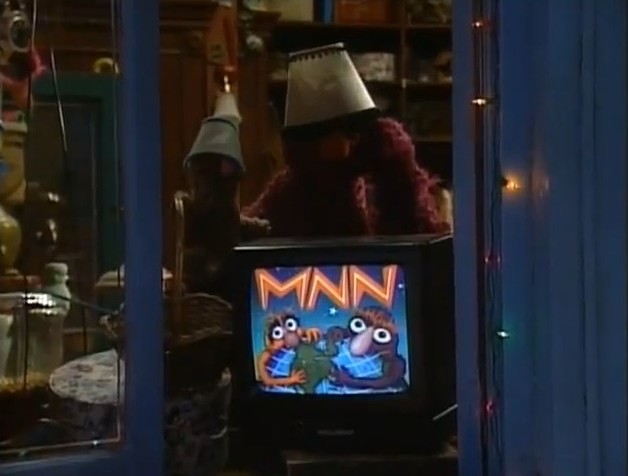 Click here to drop the ball on the ToughPigs forum!

A Tale of Two Sesame Streets