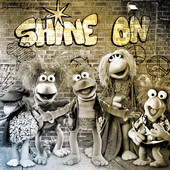 The Jim Henson Company slipped another one past us.  Not only did we not know about the Fraggle Rock tribute album that was released back in September until after the fact, but we also didn’t know that there would be a follow-up album.  Nor did we know that it’s already online and available for purchase.

I don’t know about most of you, but I don’t recognize any of these artists.  That doesn’t mean that they’re bad, just that we don’t know what to expect.  I kept an open mind while listening to the samples, and some of them turned out pretty good.  Others, not so much, but that’s the risk you take.  I’m also curious as to why “Let Me Be Your Song” appears on the album twice, but I guess if there’s any song to get that honor, that’s the one.

Many thanks to Jennifer Filips for the head’s up! Click here to add some electronica noise to the ToughPigs forum!