Sesame Street Was Everywhere This Week 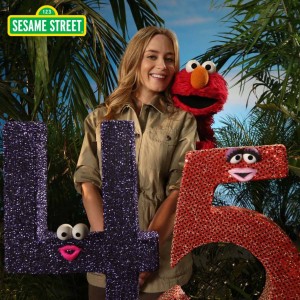 Do you think Emily Blunt knows there’s a monster stuck to her shoulder?

By this point, I bet you already know who turned 45 years old this Monday, November 10th.  But in case you don’t, I’ll tell you: Ellen Pompeo from Gray’s Anatomy!  Happy 45th birthday, Ellen!

Oh, and also Sesame Street turned 45, so that was pretty neat too.

Of course, everyone who’s not a jerk loves Sesame Street, so the internet was abuzz with all kinds of articles this week celebrating the show’s big 4-5. (At least, when it wasn’t abuzz with stuff about comets and Kardashians.)  Here are some of the highlights. 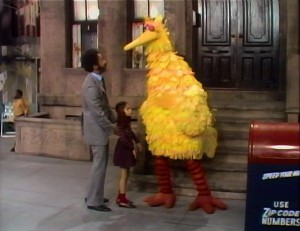 There were a lot of lists, and various websites and publications created lists relevant to their own particular interests.  For example, Tough Pigs is a website for Muppet fans scrutinizing Muppety things, so Joe posted 45 Things to Love on Sesame Street‘s 45th Anniversary, a detailed and affectionate look back at the very first episode.  (That’s the one that introduced us to Susan, Gordon, Big Bird, Oscar, and the dots.)

The Washington Post is a newspaper from a city full of politics, so they came up with 14 times politicians appeared on the show.  Hmm… Is Michelle Obama really a politican?

Playbill is a publication for the Broadway world, so naturally their list was of Sesame Street‘s “best Broadway-style moments.”

When you think of CNN, you think of cute things, like that adorable Wolf Blitzer.  So it only makes sense that CNN made a list of Sesame Street‘s “cutest” moments.

The big anniversary didn’t escape the notice of the late night talk show hosts.  Conan O’Brien decided that since Ernie is 45 now, he should do the responsible thing and get a colonoscopy.  Ask yourself if you really want to see what that looks like before clicking on the link.

Meanwhile, Christoph Waltz dropped by Jimmy Kimmel Live and talked about his experience with Sesame Street, and gave his own “Dramatic Interpretation” of the theme song:

The Onion chimed in with their own take as well, with a timeline of “defining moments” from the show, none of which I will spoil here.

On a more serious note, The Miami Herald ran an editorial about Sesame Street‘s legacy of diversity. 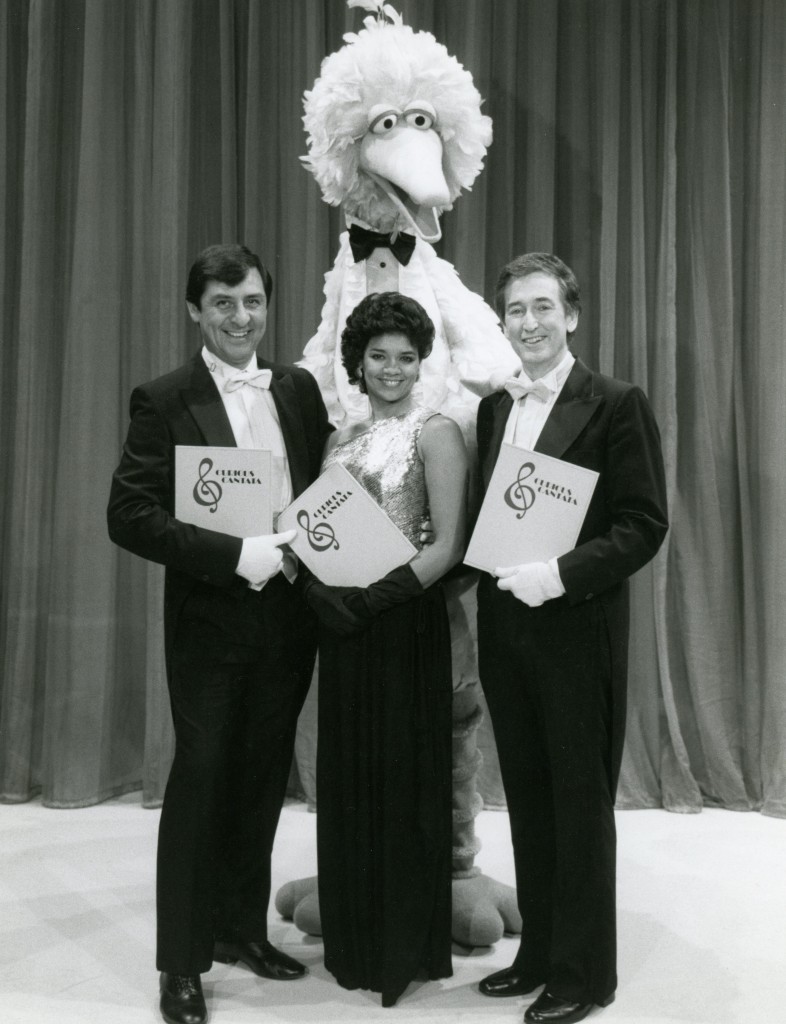 Hey, how about some interviews with the show’s longtime stars?  Here’s Roscoe Orman talking to Time, here’s the Huffington Post interviewing Bob McGrath, here’s Sonia Manzano reminiscing about her early days on the show for CBS News, and here’s Caroll Spinney sharing some thoughts with CBC News.

Speaking of Time, they ran a list, too: 11 of the Most Memorable Celebrity Guests on Sesame Street.  It must have been hard to narrow that down to 11, considering every celebrity ever has been on the show.

Most humans agree now that Sesame Street is a good television program and good for kids, but that wasn’t always the case, as two long-standing publications reminded us.  The Wall Street Journal re-posted an article from 1969, which is mostly an optimistic description of the new show and its intentions, but which also quotes a professor of education as saying the show may not work because it “is not really teaching anything in particular.”  The Atlantic also reminded us that in 1971, one of their critics predicted that the show “will be a disappointment in the long run.”

Sesame Street‘s TV neighbor NewsHour has always been a fan of the show, however, and they took a look back at the times they’ve crossed paths with Cookie Monster and the gang over the years.  When was the last time you saw the “CookieGate” sketch with Kermit, Cookie Monster, and NewsHour‘s Robert MacNeil?   That’s too long!  Click on the link and watch the clip!

There were also way too many websites that posted lists of “surprising facts” about Sesame Street.  You and I have already known all those facts for years, but I can sum them up for you: Oscar used to be orange, “Farwell Mr. Hooper” was a good episode, the adults didn’t see Snuffy for a long time but then they did, and Kami from Takalani Sesame exists. 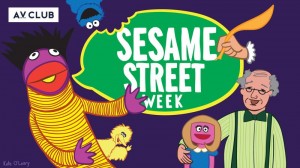 But perhaps the best Sesame Street material on the internet this week was done by The AV Club, who declared the entire week Sesame Street Week.  Their coverage was fun and insightful, and inspired a ton of nostalgic feelings in their readers, if the comments are any indication.  Sesame Street Week included:

And those were the highlights of the week when the internet couldn’t stop talking about Sesame Street!  If you saw anything else I didn’t mention here, feel free to send me a link at Ryan@ToughPigs.com, and if I decide it’s worthy, I’ll update this article with it. 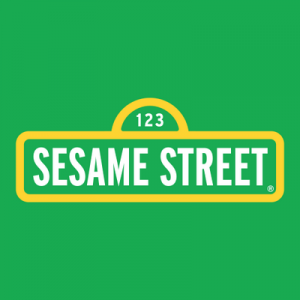 The Monster at the End of the Internet