I can tell there’s a Sesame Street Live company touring right now because I’ve been getting a lot of Google alerts lately for the show called “Make a New Friend.”  I assume “Make a New Friend” is about Elmo learning how to meet new people, and not about a Dr. Frankenstein-like character coming to Sesame Street and literally making new friends out of sewn-together, reanimated furry body parts, but please correct me if I’m wrong.

It occurs to me that we haven’t talked about Sesame Street Live much on this website, but it certainly represents a colorful square on the oversized quilt of my childhood Sesame fanhood.  I saw a handful of Sesame Street Live shows as a kid in the 1980s, when I lived near Austin, Texas, and every year I anticipated it with as much excitement as the circus, and more excitement than the Ice Capades, which I only saw once because it was boring.  When Sesame Street Live came to Austin, it was performed at the Frank Erwin Center, an arena that looks like this: 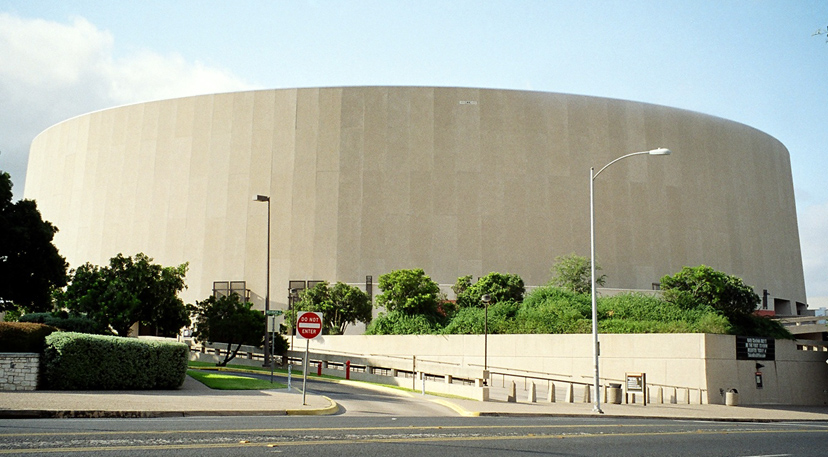 Kind of like a giant concrete biscuit.  As far as I know, there has never been an attempt by an artist or chef to cover the building in millions of gallons of cream gravy.

Anyway, I’m looking at the Muppet Wiki list of Sesame Street Live shows, and the ones I remember seeing at the Giant Concrete Biscuit Center are: 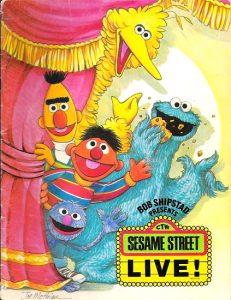 Around the World: In which Cookie Monster takes his friends on a trip around the world, with no apparent adult chaperones, once again raising the question of whether any of these characters has parents.

Big Bird Goes Hollywood: Muppet Wiki’s description says “Guy Smiley wins a movie studio but must put together a feature film in one hour. Director Big Bird and the rest of the Sesame Street gang answer Smiley’s call for help.”  It seems to me Guy Smiley would be pretty good at directing a movie himself, or at least at shouting orders to the crew.  Maybe he wasn’t confident in his ability to make the creative decisions, which is why he handed things off to a six-year-old.

Big Bird and the ABCs: In which an alien from another planet shows up on Sesame Street.  Her name is Tee Hee, and I recall a lot of jokes about “You can’t say her name without laughing!” Naturally, rather than taking her to NASA as proof of intelligent life out there, or to the UN to meet world leaders as an interplanetary ambassador, Big Bird and his friends welcome Tee Hee to Earth by teaching her the alphabet. 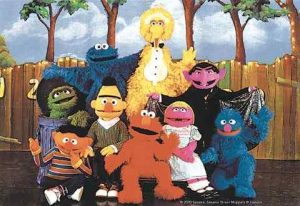 Apparently I outgrew Sesame Street Live just before they did one called “Big Bird’s Sesame Street Story,” and reading about it, I sure am sorry I missed that one.  The synopsis: “Big Bird and his friends explain how the television show Sesame Street came to be.”  Wow!  The Muppet characters almost never acknowledge that they’re on a TV show.  Usually it’s just accepted without explanation that they all stay the same age forever, and somehow they’re okay with the fact that everyone in the world knows everything that goes on in their neighborhood.

Muppet Wiki quotes the Los Angeles Times review for “Bird Bird’s Sesame Street Story” thusly: “…it’s awfully grandiose for these unassuming characters. And the story line is even more narcissistic: a look at how Sesame Street got to be a TV show. It isn’t a factual story; no one mentions Muppets creator Jim Henson. But its explanation of how everyone had to be convinced that kids would want to learn something from TV, as well as be entertained, is ridiculously self-promotional.”  Crazy, man.  I’d like to get my hands on the soundtrack from that show… I bet the big musical number about selecting which educational curricula to emphasize was a real show-stopper.

If I may backtrack a bit and go back to Tee Hee, she’s an example of an aspect of Sesame Street Live that I find particularly interesting.  As fans/geeks, we pride ourselves on knowing every obscure Sesame Street character, but the history of Sesame Street Live is full of more-or-less official Muppets that even the hardcore fans would be hard-pressed to identify.  If you’re reading this, I bet you consider yourself something of a Sesame Street expert, right?  Well, who are these guys, Mr. or Ms. Smartypants? 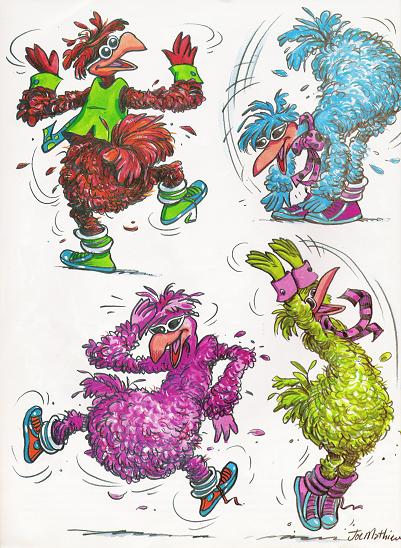 Why, that’s Tangerine, Eduardo, Miranda, and Victor, of course… better known as the Seedy Birds!  They shared the stage with the better-known characters for more than one Live show, probably because those costumes are expensive to build and they wanted to get their money’s worth.  Here’s something to expand your horizons: The next time you’re just sitting there waiting at the DMV, take a look at Muppet Wiki’s Sesame Street Stage Characters page.  You’ll thrill at the descriptions of such favorites as Tedious J. Molehill, Wuzzy Wonderful, and of course, “The Teenager.”

I’ve been thinking about my childhood experiences with Sesame Street Live, and I realized that, other than my general fascination with the stage-only Muppets, two specific incidents stand out. 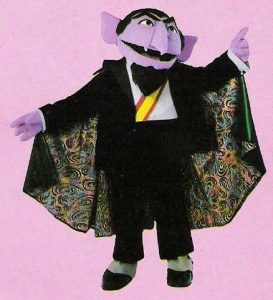 One day, our local “family fitness center” announced that a special guest was coming to lead an aerobics class.  It was the Count!  I was pretty excited when my parents told me about it.  I had never seen a major television celebrity in person before, and now one of the stars of my favorite shows was going to be doing jumping jacks in the same room as me.

We went to the “family fitness center” that day, and found a good spot in the aerobics class, and sure enough, they brought out the Count.  He gamely demonstrated every stretch and calisthenic alongside the in-house instructor, but from the very beginning a strange feeling was nagging at me.  It wasn’t the fact that I could see his feet.  I always just assumed those were there somewhere.  Rather, it was this: Why wasn’t the Count talking? 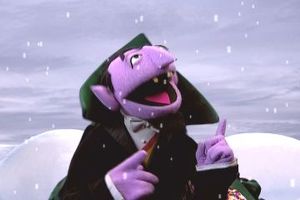 On TV, the Count never shuts up about numbers, and counting, and… well, pretty much just numbers and counting.  But the Count jogging in place that day was strangely mute.  Kids are dumb, but I even at my young age I could tell something eerie was going on.  I was expecting a crazed, shouting vampire with the power to bring lightning down from a clear blue sky.  I wasn’t expecting some creepy guy.  I couldn’t shake the feeling of unease… at least until a few days later when we saw the actual stage show and the Count was as boisterously vocal as usual.  I suppose I didn’t notice then that he wasn’t moving his mouth when he spoke, so I was still a pretty dumb kid.

The other incident affected my younger brother more than me, but I was an eyewitness.  A few years after the Spooky Count Encounter, the whole family went to see a new Sesame Street Live show.  My brother Jason was probably about two years old.  The show began with all the costumed Muppet characters bounding onto the stage to the sounds of the familiar theme song, dancing and singing, and then running out into the audience to greet their adoring fans.  My brother’s eyes grew wide as Grover ran straight down the aisle, moving closer and closer — and finally Grover was upon him, waving at him and tousling his hair.

Normally, my brother was and is a big fan of Grover.  But something was amiss.  Grover was HUGE.  This was not the cute little monster he was used to seeing on our medium-sized TV screen.  This was a massive, lumbering beast, and he had singled Jason out for a nightmarish confrontation.  Jason did what any rational child that age would do, and burst into tears.  Grover immediately covered his mouth as if to say “Oops!” and ran off — no longer was he NEAR Jason, instead he was FAR — leaving my parents to console their son in the aftermath of his unexpected Grover-related crisis.

So when I think about it, all of my most prominent associations with Sesame Street Live involve small children being confounded and disoriented.  But you know what?  Sesame Street is all about teaching kids skills for life, and life is all about being confounded and disoriented, and dealing with things that don’t match your expectations.  That’s right… Everything I’ve been talking about here is a perfect metaphor for life!  Sometimes you think you know which Muppets you’re going to see on the arena stage of life, but life throws a few unforeseen Seedy Birds at you.  Sometimes you think you know everything there is to know about the Counts in your life, but when he shows up he’s not quite himself.  And sometimes the thing you thought was cute and pleasant turns out to be a little bit scary.

Therefore, my advice to the parents of today is: Take your kids to Sesame Street Live.  Let them be confused.  Let their tiny brains learn to deal with the unexpected.  It’s good for them!  But if they cry, maybe buy them one of those little Elmo light-up flashy-spinny thingies.

Do you have any scary or fun or scary Sesame Street Live memories?  Drop by our forum or Facebook page, or e-mail me at Ryan@ToughPigs.com to tell me about them!

Infinite thanks as always to Muppet Wiki for photos and research assistance!   Click here to put together a feature film in one hour on the Tough Pigs forum! 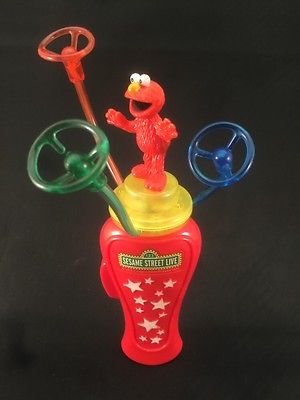