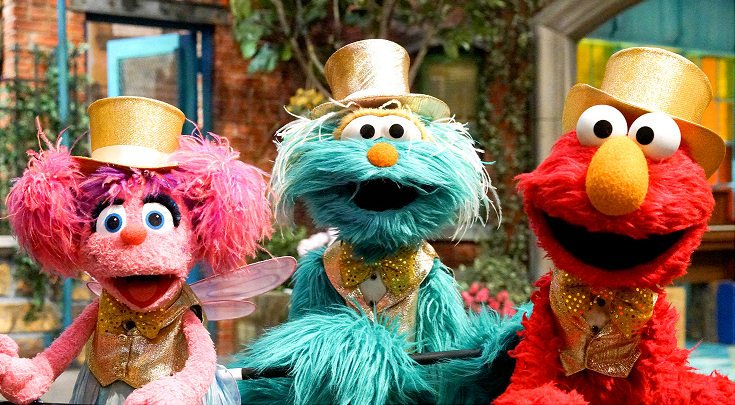 Hey, did you know that Sesame Street is still on the air after 47 YEARS??  Of course you did.  But man, I’m never not amazed at the lasting power of Big Bird and his pals.

Sesame Workshop has announced that Sesame Street‘s 47th season will premiere in January, 2017 on HBO.  And there are a lot of interesting surprises that are tagging along.

First up, give a watch to the season 47 sizzle reel, which serves as a sampler for what to expect in the new episodes.

Here’s a full Elmo’s World episode to give you a taste of the new format:

We’ve learned that there will be three Mr. Noodles: Bill Irwin (who performed as the original Noodle), comedian Daniel Koren, and Hamilton‘s Daveed Diggs.  There will also be a few Noodle dogs named Schmoodle, Floodle, and Frank.  Dorothy is nowhere to be seen, but instead Elmo talks to his smartphone Smartie.

And a couple clips from upcoming episodes, one of which features Zachary Levi as The Kindness Kid:

For those of you interested in the new Street stories, here are the official episode descriptions:

The Kindness Kid – The Kindness Kid (played by Zachary Levi) visits Sesame Street to spread kindness, and Grover wants to be a Kindness Kid too–but every time he tries to do something kind, he fails. Chris helps Grover realize that just trying to help someone is actually being kind.

Super Sitters – Grover and Cookie Monster help Chris babysit, and learn how to take care of a baby.

Having a Ball – When Saul the Ball is disappointed that he can’t play ball with Elmo and Rosita inside the house, Elmo and Rosita help him use his imagination to play other games.

Dress Up – Abby and Elmo play dress up and pretend to be lots of different people, like bike repair assistants, to help Nina fix Rosita’s bike.

Norbert’s Birthday – Rosita, Zoe, and Grover give Norbert the Robot a surprise birthday party to show how much they care about him.

Elmo Comes Clean – Elmo keeps hiding from Nina because he wants more time to play before his bath, but Ernie helps him realize that he can play in the bathtub, too.

Big Bird’s Song – Abby and Elmo help Big Bird calm down, so he won’t be nervous singing on the show, “The Squawk.”

Get Ready for Today – Elmo and Abby help Crystal the Ball come up with a morning routine, so she can be ready to go out and play.

Bike Show with a Beat – Nina and her friends make musical instruments out of bike parts and play music to attract customers to her new bike shop.

Father’s Day – It’s Father’s Day, and Rosita’s friends help her make a video message, so she can tell her dad how much she loves him.

Keep an eye out for the new season of Sesame Street in January on HBO, as well as PBS Kids, YouTube, and Univision!

Click here to do the happy dance dance on the ToughPigs forum!

Billy on the (Sesame) Street