How do you teach people about the pervasive racism in society? It’s a question we’ve all been grappling with for some time, and especially right now.

When writing stories about this, people often try to use metaphor to make the narrative more palatable or understandable. Take something like Bright or X-Men or District 9. Ideally, we watch and learn not to be hateful against orcs and mutants and aliens, and then sit back and say, “Huh, I bet I should treat real marginalized groups the same way.” Perfect. Done. Let’s all go to the barbecue and then maybe fight Magneto again.

But the problem is, the metaphor never really works. After all, orcs and mutants and aliens do have different powers and capabilities from humans, and frankly, the government is justified in being afraid of someone who shoots laser beams out of his eyes every time his glasses fall off. Real-life marginalized groups aren’t monsters, and setting up stories like this dooms the metaphor to fail.

On Sesame Street, though, the monsters are nice and love cookies and triangles and the letter M, so maybe there’s something else there. Certainly, Sesame Street has relied on this structure: Big Bird’s friend Gulliver didn’t want to be friends with people who aren’t birds, the adults assume Herry’s brother must also be strong and loud, and of course Kermit sings that it isn’t easy bein’ green, but it’ll do fine.

These metaphors work well for kids and all of these moments make great points about self-acceptance, avoiding assumptions, and looking for the best in others. And sure, “Bein’ Green” is much better than Bright. But in a way, they still fall into the same trap as the other stories: I mean, no one hates frogs because they’re green.

One strength that Sesame Street has, though, is that it isn’t afraid to put the metaphor aside and show how racism affects real people. That’s part of what’s so special about Episode 3140, from Season 25 of the show. The episode begins with Gina and Savion exiting the subway station and walking to Hooper’s Store from around the corner. For those who aren’t as intimately familiar with 90s Sesame Street as I, you should know that Savion is played by the famous tap dancer Savion Glover, who you probably know as Mumbles from Happy Feet. Gina is Mr. Hanford’s peppy assistant at Hooper’s who would later become Sesame Street’s veterinarian. The two are clearly best friends: they jump on a mattress together, play basketball, and even give each other a kiss. Best friends stuff.

However, when Gina and Savion enter Hooper’s Store, Gina receives a disturbing phone call. We don’t hear the other person, but Savion and Telly Monster can tell that the caller has made Gina terribly upset. Gina explains that the caller wanted to let them know they saw Gina and Savion hanging out, and they want them to stop, because Gina is white and Savion is black.

Telly doesn’t understand why this would be the case, because on Sesame Street, everyone is friends, and of course, this dips briefly into metaphor when they talk about how Telly is purple and they’re friends with him. But of course, it never strays too far from a real thing that affects real people like Gina and Savion.

Telly is reassured that the Sesame adults aren’t going to stop being friends with each other, or with him, or with Baby Bear or Oscar, but he’s still worried about what will happen if the person calls back. And rightly so! But here’s where things get weird for Sesame Street–in a good way.

You see, we all know that Sesame Street is built around the idea of teaching kids to be smarter, stronger, and kinder. Whenever Elmo messes up and is selfish with his blanket, the characters explain to him why he needs to be better next time. When Rosita gets too excited and accidentally hurts a friend, the characters tell her why she needs to calm down. When the adults realize they’ve accidentally been gaslighting Big Bird about Snuffleupagus for a decade, they apologize and say they’ll do better.

But this time, Savion and Gina aren’t going to teach. They tell Telly that if the racist calls back, they’re just going to blow raspberries into the phone and hang up. Telly and I think this is hysterical. Later in the episode, Gina and Savion dance past the place where they assume the racist saw them, not letting that change their actions at all.

And this is such a great point! Don’t humor racism. Don’t debate racism. Be better. Stick together. Support the victims and those who are confused, but recognize that some people are just toxic and shouldn’t be listened to at all.

It’s the right message and the right idea, even if it is hard to take. Adults watching Sesame Street get it: the identity of the caller doesn’t matter. We don’t need to hear it or see it, we just see its effect on the victims. In this way, it’s a much cleaner metaphor for the ceaseless voice of institutional racism than say, the elves of Bright are. The voice doesn’t care about what makes Gina and Savion happy and how they aren’t hurting anyone. And adults realize that Savion could easily be killed for kissing Gina (but obviously they’re not going to tell that to Telly Monster). But there’s no reasoning with systemic racism. Some people refuse to learn, and these people should not have power over anyone.

Also in this episode, Telly and Baby Bear try to buy a bulldozer for two cents, but that’s not really important right now. Just good to know that life goes on for all the good people on Sesame Street.

Click here to stick together on the Tough Pigs forum! 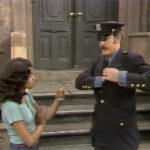 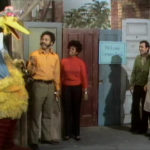 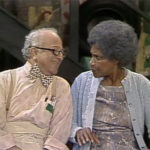 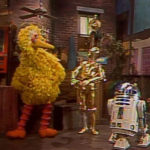