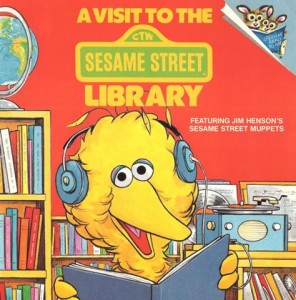 Sesame Street is turning 45 this year, and because 45 is divisible by 5, we’re expecting some sort of celebration.  And now it seems that part of their anniversary festivities will be held in the most exciting party-central ever: the library.

The exhibit will feature a backstage look at how the show is made.  You’ll get to see storboards, scene designs, photographs, animation cels and musical scores from Sesame Street’s archives, and some of the puppets will be there too.  So if you want to get a rare glimpse of Super Grover or Mr. Snuffleupagus (yeah, Snuffy), then this is your chance.

The library is also planning some screenings and public programs about script writing, puppetry, and other aspects of the show.  Stay tuned to ToughPigs for more info about these events as they’re announced.

The exhibit will be on display from September 18th to January 31st.  We’ll be checking it out, and we think you should too.

Click here to use the Dewey decimal system on the ToughPigs forum!

See Emmet Otter on the Big Screen in December

The Great Muppet Caper Returns to Theaters in August