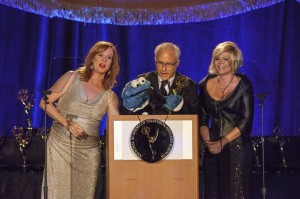 We’re very happy and not at all surprised to report that Sesame Street won a bunch of awards at the creative arts ceremony for the Daytime Emmys on Friday night, including the Emmy for Outstanding Preschool Children’s Series. I believe this makes 432 times they’ve won that particular award.

Unsurprisingly, the one that seems to be making its way into all the news headlines about the ceremony is Kevin Clash’s victory for Outstanding Performer in a Children’s Series. I was curious to see if his recent personal troubles would prevent Emmy voters from giving him the award, and apparently they didn’t.

Congratulations to all the Sesame Street people! I can’t wait to see how many they win next year. Oh, and in case anyone was wondering, Days of Our Lives won Outstanding Stunt Coordination. They totally deserve it.

Thanks to Tough Pigs’ own Nick for finding the Cookie Monster photo! Click here to give an acceptance speech on the Tough Pigs forum!