The Muppet Show Season 2: Who’s the Most Valuable Muppet of All? 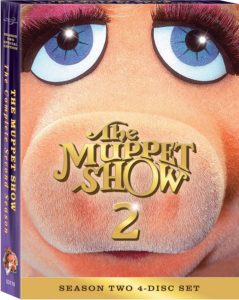 You’ve read all our reviews of season two of The Muppet Show, right?  It’s been a nutty undertaking, but we managed to get through the entire season, posting a review of each episode 40 years after it aired.

In addition to several paragraphs devoted to sharp-eyed critical analysis (or talk about how great John Cleese is), each review contains a section singling out various elements of that episode: What was the best joke?  What was the musical highlight?  And so on.

Now that we’ve concluded the first season, I thought it would be fun to compile a bunch of those in one place to create an overview of the season.  Starting with… 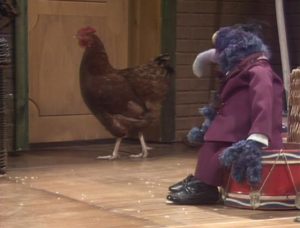 This title goes to the Muppet who makes the greatest contribution to each episode. Last season it was Kermit the Frog. This season, we have a tie — but neither of the tied Muppets are Kermit! Instead, it’s Gonzo and Fozzie Bear, each of whom were singled out four different times by our team of reviewers. Gonzo was the MVM for the George Burns, Rich Little, Madeline Kahn and Peter Sellers episodes, while Fozzie took the title for the Edgar Bergen, Don Knotts, Lou Rawls and Cleo Laine episodes.

The frog was close behind, though… He tied for second place with three different MVM titles, for the Jaye P. Morgan and Julie Andrews, and as co-MVM for the John Cleese episode. Neck-and-neck with Kermit was Miss Piggy, who was also named MVM thrice, for the Dom DeLuise, Teresa Brewer, and Judy Collins episodes. Then there was Sam the Eagle, with two MVMs to his name, for the Zero Mostel and Rudolf Nureyev episodes. 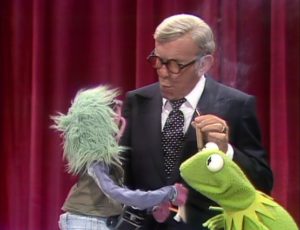 George Burns’s deadpan answer to Fleet Scribbler’s question about how much the Muppets are paying him to be on their show: $25,000.

Madeline Kahn: “I’m sorry it didn’t work out.”
Gonzo: “You should be. Now you’ll have to go to all those PTA meetings alone!”

Floyd wandering backstage, saying to Zoot, “…and then the tuba player says, ‘Never mind that. Just B natural in bar 11!”
(Dom DeLuise)

In the “At The Dance”/”Veterinarian’s Hospital” crossover:
Female Whatnot: “Are you the doctor? Would you remove a large growth from my toe?”
Rowlf: “Sure, what is it?”
Female Whatnot: “Him.” (references dance partner)
(Nancy Walker)

Floyd asks Kermit if they’ll be using the All Food Glee Club, and if Floyd can use them if Kermit’s not…
Kermit: “Are you putting together a show?”
Floyd: “No, a dinner.”
(Steve Martin)

The punchline of the sketch featuring Sam the Eagle reading the fable of The Ant and the Grasshopper.
(Bernadette Peters)

Don Knotts’s physical comedy in the “Beast of the Week” sketch.

The visual gag of Sweetums raising the arms of a totally defeated John Cleese at the end of the final sketch.

As part of a running bit where Statler and Waldorf are watching TV during the show, they change the channel and are unimpressed to find “two ancient old guys sitting in a theater box watching television.”
(Zero Mostel)

The overall gag of Sam being so intensely invested in Rudolf Nureyev’s arrival, only to then shoo him out of the backstage without realizing it’s him.

The Swedish Chef throws a cabbage in the air and it comes down as brussels sprouts.
(Judy Collins)

In a “Veterinarian’s Hospital” where the patient is Baskerville the Hound:
Rowlf: “Oh, I wish he was a dachshund.”
Janice: “Why?”
Rowlf: “I’d like to get a long little doggy.”
(Elton John)

Peter Sellers plays a violinist who asks his audience if they have any requests. One onlooker shouts out, “Yeah, but you’re gonna play anyway!”

Fozzie: “A guy walks in to a diner. There’s a horse behind the counter. The guy just looks at the horse. The horse says, “What’s the matter, surprised to see me here?” And the guy says, “Yeah, did the cow sell the place?”
(Lou Rawls)

The Newsman announces that a plane carrying a symphony orchestra has been forced to jettison some musical instruments. At which point the viewer is expecting him to get pelted with violins or flutes or French horns… but then a piano falls on his head!
(Jaye P. Morgan)

From the “At the Dance” sketch:
Woodpecker: “I’d like to take you home to mother.”
Pink Bird: “Really, Harold?”
Woodpecker: “Yeah, maybe she could teach you how to dance.”
(Petula Clark)

During a scat number, Zoot informs Cleo Laine that “a zebra and a geranium should never use the same toothbrush.”

There’s a cow backstage. Kermit wants to know who the cow belongs to. So naturally, Scooter asks the cow, “Who do you belong to?”
(Julie Andrews)

Kermit, Fozzie and Gonzo are attempting to escape from their imprisonment in the boiler room. Fozzie suggests a non-existent window, then cheerfully says “the window!” a second time, as though saying it again will make a window appear and they’ll be able to escape.
(Cloris Leachman) 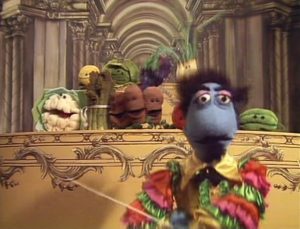 A Whatnot quartet sings “Chattanooga Choo Choo” and almost gets hit by a train. It also doesn’t help that the train in question is obviously a toy.
(George Burns)

“Dr. Bob, even if he is a little horse, should you be using the saw?”
“Sure, you’ve never heard of a sawhorse?”
(Rich Little)

Statler: “I think they were trying to make a point with that sketch.”
Waldorf: “What’s the point?”
Statler: “You’re right. Forget it.”
(Madeline Kahn)

Nancy Walker, when called for stand by, saying, “Are you kidding, stand by? I can’t even stand up!” as Timmy Monster stands on top of her.

Floyd asks Kermit if they’ll be using the All Food Glee Club, and if Floyd can use them if Kermit’s not…
Kermit: “Are you putting together a show?”
Floyd: “No, a dinner.”
(Steve Martin — Yes, this was also the Best Joke of the episode. Sometimes the lamest jokes are the best ones.)

In a Muppet Newsflash: Man contests mother’s will against cat, gets awarded entire estate of rubber mice.
(Milton Berle)

From “Veterinarian’s Hospital”:
Janice: He has three feet on the table.
Screaming Thing: That’s nothing, I left two feet in Cincinnati.
(Don Knotts)

Teresa Brewer turning to the camera after Kermit’s been shoved into a cake and saying: “How about that! Frosted frog!”

Rowlf: “Usually this bird’s a great performer, but tonight she laid an egg.”
(John Cleese)

Scooter coming into the dressing room during the cold open, seeing Rudolf Nureyev hasn’t arrived yet, and then telling the camera, “Uh-huh. I knew he was too smart to show up.”

Statler and Waldorf’s moment during the show opening, where they usually have something witty to say, it just shows them getting to their seats.
(Elton John)

In an “At the Dance” sketch…
Male Whatnot: “You know, the trouble with women is they always take things personally.”
Female Whatnot: “I don’t.”
(Jaye P. Morgan)

Muppet Newsflash, in which a falling bowling ball lands on the Newsman’s head.
(Julie Andrews)

Fozzie Pig is “that great big loveable ham who’s really a boar and proud of it!”
(Cloris Leachman) 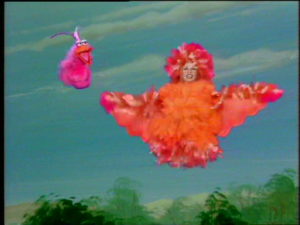 The high-angle pan-out on Piggy in “The Boy in the Gallery.” It really does look like she’s standing alone on the stage, commanding every inch of it.
(Rich Little)

When Miss Piggy karate-chops Dom DeLuise, then kicks him – and for just a second, you can see her leg in the shot.
(Dom DeLuise)

A big chicken Muppet bursting through a wall and picking up a Whatnot.
(Nancy Walker)

The Steve Martin episode is chock full of Bunraku style puppetry… used to show full-bodied puppets while erasing the puppeteer.

When Granny the Gouger, a rod-hand puppet, lunges at Kermit backstage, she hits the intercom, knocking it off the wall.
(Zero Mostel)

Gonzo’s theme song gag: a balloon being blown up all the way as he plays the trumpet.
(Rudolf Nureyev)

The Newsman’s copy spontaneously sets on fire and burns up his hand.
(Judy Collins)

Kermit gets his foot stuck in gum. We don’t see the gum. We don’t see his foot. This version of the Kermit puppet doesn’t have feet. But Jim Henson’s expert puppetry makes us believe that Kermit is struggling to free his flipper from its sticky trap.
(Peter Sellers)

Jaye P. Morgan is essentially turned into a puppet in the opening number, which presents her as a bird with fluffy feathers, flapping her wings for the whole song.

Everyone sinking into the table in “Veterinarian’s Hospital.”
(Petula Clark)

Gonzo can’t actually dig a hole in the wall with a spoon, because his floppy, soggy arms don’t allow for that much force. So he just taps the wall with his spoon, but Gonzo is so committed to his plan that we buy it anyway. Muppet magic!
(Cloris Leachman) 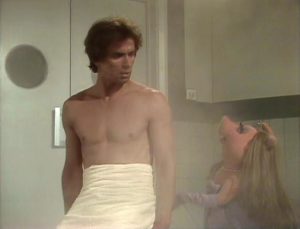 During “The Entertainer,” Piggy lays against the piano and shakes her chest vigorously. Rowlf is so shocked that he looks away.
(Milton Berle)

When the liquid-based Koozebanian Spooble is consumed by a thirsty creature, Kermit announces “For the first time in history, a Koozebanian has been drunk on television.”  Also, in a UK spot, “Waiting at the Church,” Miss Piggy plays a very pregnant bride jilted at the altar after her beau (Kermit) backs out of the wedding, explaining, “Can’t get away to marry you today, my wife won’t let me.”
(John Cleese)

Miss Piggy and Rudolf Nureyev’s entire rendition of “Baby, It’s Cold Outside,” particularly when Piggy goes so far as to pull Nureyev’s towel off.

A closing number featuring Peter Sellers as a bass drum-banging preacher singing a song about the evils of “cigareets” and whiskey and wild, wild women. 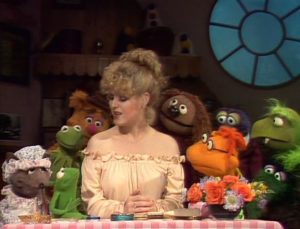 The “Coffee Break Machine” sketch, in which a monster eats a machine as the machine describes its high-tech functions.
(George Burns)

An elderly scientist sings “Time in a Bottle” as he drinks a series of potions that render him younger.
(Edgar Bergen)

Marvin Suggs and His All Food Glee Club.
(Steve Martin)

Milton Berle’s monologue, where he gets to spar with Statler & Waldorf.

“What a Wonderful World,” sung by Rowlf, with special appearance by a real puppy!
(Don Knotts)

A tie between Dr. Teeth’s “Cheesecake” and Gonzo’s reciting Merchant of Venice while hanging on a feather boa.
(Teresa Brewer)

John Cleese hijacks the Swinetrek as a pirate in “Pigs in Space.”

“Pigs in Space” where Link won’t let Piggy (“a woman”) perform the mid-course correction maneuver even though she studied it for 11 years. He does it himself and, of course, gets it wrong.
(Judy Collins)

“For What It’s Worth,” performed by a group of woodland creatures.
(Bob Hope)

Gonzo digging his way out of the boiler room with a spoon, all the way to Statler & Waldorf’s box.
(Cloris Leachman) 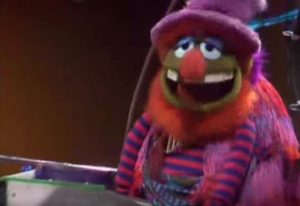 The Boy in the Gallery, one of Piggy’s best solos of all-time.
(Rich Little)

Nancy Walker singing to Fozzie in her dressing room.

“What a Wonderful World,” sung by Rowlf, with special appearance by a real puppy!
(Don Knotts)

The Electric Mayhem’s rendition of “Polonaise in A Flat.”
(Zero Mostel)

The Electric Mayhem’s rendition of Boccherini’s “Minuet in A Major.”
(Rudolf Nureyev)

Petula Clark leads the Muppets in a rousing finale of “Tomorrow.”

Cleo Laine and the Swedish Chef duet on “You’re Just in Love.”

Julie Andrews graces Kermit with a heartfelt rendition of “Song for Kermit (When You Were a Tadpole).” 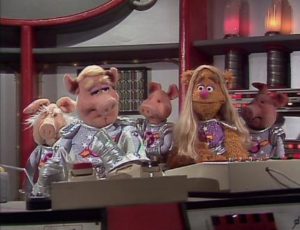 And there you have it! Season two in a nutshell. There were a few other categories, but we didn’t use them quite as often as these. Keep your eyes on this website for our season three reviews in the fall, and if you haven’t already, be sure to check out our Season Two Review for all the Tough Pigs folks’ opinions on the season as a whole.

Click here to do a roller-skating comedy routine on the Tough Pigs forum!

The Muppet Show Season One: Who’s the Most Valuable Muppet of All?

The Muppet Show Season 3: Who’s the Most Valuable Muppet of All?

The Muppet Show Season 4: Who’s the Most Valuable Muppet of All?