Greetings, True Bert-lievers! This is your friendly neighborhood narrator, back from San Diego with news from all over the Mupp-o-sphere. We saw the panels. We attended the signings. We watched art be made right before our eyes and we can’t wait to tell you all about it. So let’s stop waiting! And tell you! About it! Now!

For us here at Tough Pigs, we can make anything about Sesame Street, like how every time we see a cookie we have to at it in the messiest way possible. Or how every time we enter through a curtain we have to get tangled up in it for a moment. But this year at Comic Con International in San Diego (SDCC for short) really was all about Sesame Street, not only because we walked the convention floor dressed up as Reporter Kermit to get us in the right mood for interviews, but also because we saw a lot of Sesame stuff. And I do mean a lot. 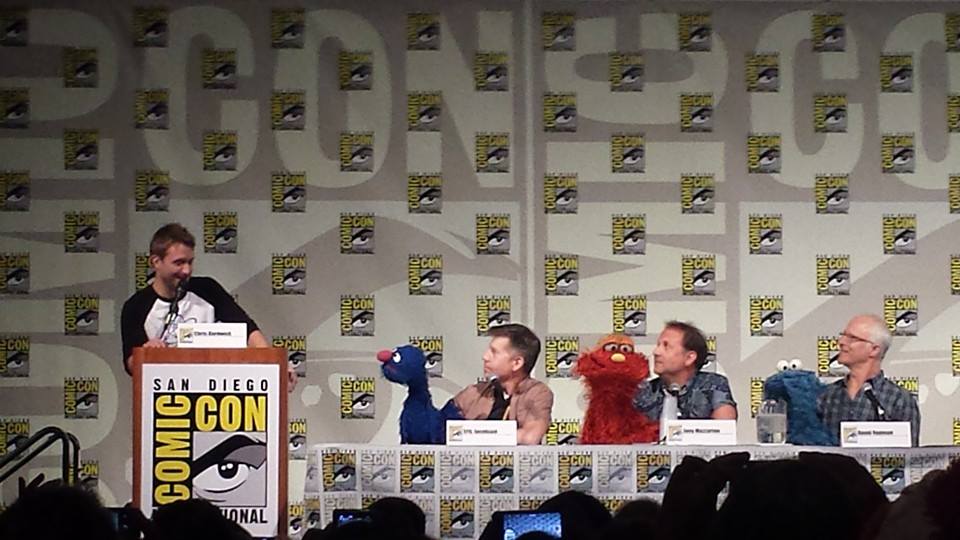 The biggest event at Comic Con proper (for us, anyway) was the Sunday morning panel titled “Sesame Street & Pop Culture: 45 Years of Spoofs on the ‘Street.’” The panel began with an introduction by the delightful Carol-Lynn Parente, Executive Producer of Sesame Street, who told us that Big Bird couldn’t make it but encouraged us all to “tweet” him about anything we liked that day. She then gave us a sneak peek of the upcoming street story “Numeric-Con.” And by sneak peek, I mean THE ENTIRE SEGMENT. And boy do they know their audience. This is such a fun, geeky episode filled with so many superhero and pop culture references, you might need to watch it twice to catch all them all. But trust me, you’ll want to watch it more than twice. I won’t spoil the surprises so that you can enjoy the jokes for yourself, but if you’ve ever opened a comic book or turned on your television, chances are something you love with all your nerdy heart will pop up in this episode. In the preview post on YouTube alone you can catch references to Star Wars, Batman, Super Mario Bros., The Number 9, Doctor Who, Godzilla, The Number 3, X-Men, Star Trek, and The Simpsons. It’s fun and funny and has a great song about learning what to do when your original plan falls through. And if you’re familiar with a certain co-runner of this very site, you won’t need to keep too close of an eye out to catch him. Trust me, you’ll see him. Quite a bit.

The other segment they premiered was a brand new Cookie Monster’s Crumby Pictures entitled “Star S’Mores,” and again, they really hit it out of the park with this one. Cookie Monster plays Flan Solo, with his co-pilot Chewie, and you’ll never guess what kind of creature Chewie is. Or maybe you will in a second. But either way, I vowed to stay spoiler-free. All I’ll say is that Grover’s cameo is absolutely brilliant and hilarious on so many levels. This is another sure-to-please segment that will get passed around the web more times than a Star Wars character has said, “I’ve got a bad feeling about this.” 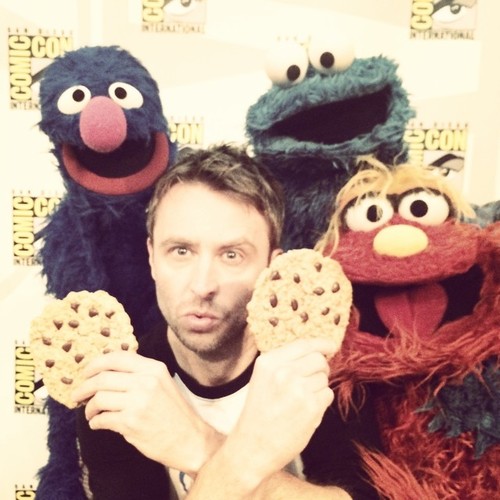 After the previews, Carol-Lynn Parente came back on stage and introduced the other panelists, Eric Jacobson, Joey Mazzarino, and David Rudman, who brought with them Grover, Cookie Monster, and Murray, who immediately began hamming it up with moderator Chris Hardwick. Hardwick led a fun discussion about how the best way to teach kids is to reach kids and Sesame Street tries to do that by having a wide generational appeal so that parents aren’t bored when they sit down and watch with their children. Some highlights of the panel include: Hardwick asking Grover what he does in his free time and him saying, “Free time? I have like 17 jobs!” and the reason for that is because he likes to help people so much; Joey Mazzarino pretending that some of the puppeteers didn’t get along and giving David the stink eye before revealing that he was the best man at Joey’s wedding; Hardwick asking Cookie Monster what he would do if there was a world without cookies, and Cookie getting so upset about this thought that he spilled water all over Mazzarino; and Grover saying that his secret to staying positive is to think about his mommy and how proud of him she is. The Q and A portion also provided some great insights into the characters like how Murray loves New York but can get tired of it and is hoping to get to see more of the world soon; Grover’s Super Grover 2.0 costume is a little hard to move in the neck area “just like Michael Keaton,” Grover said, to which Murray asked, “In Night Shift?”; Elmo couldn’t be there because he’s on a tee-ball team; and perhaps the most exciting exclusive to come out that day is that season 45 will feature parodies of Game of Thrones, Age of Ultron, and House of Cards. 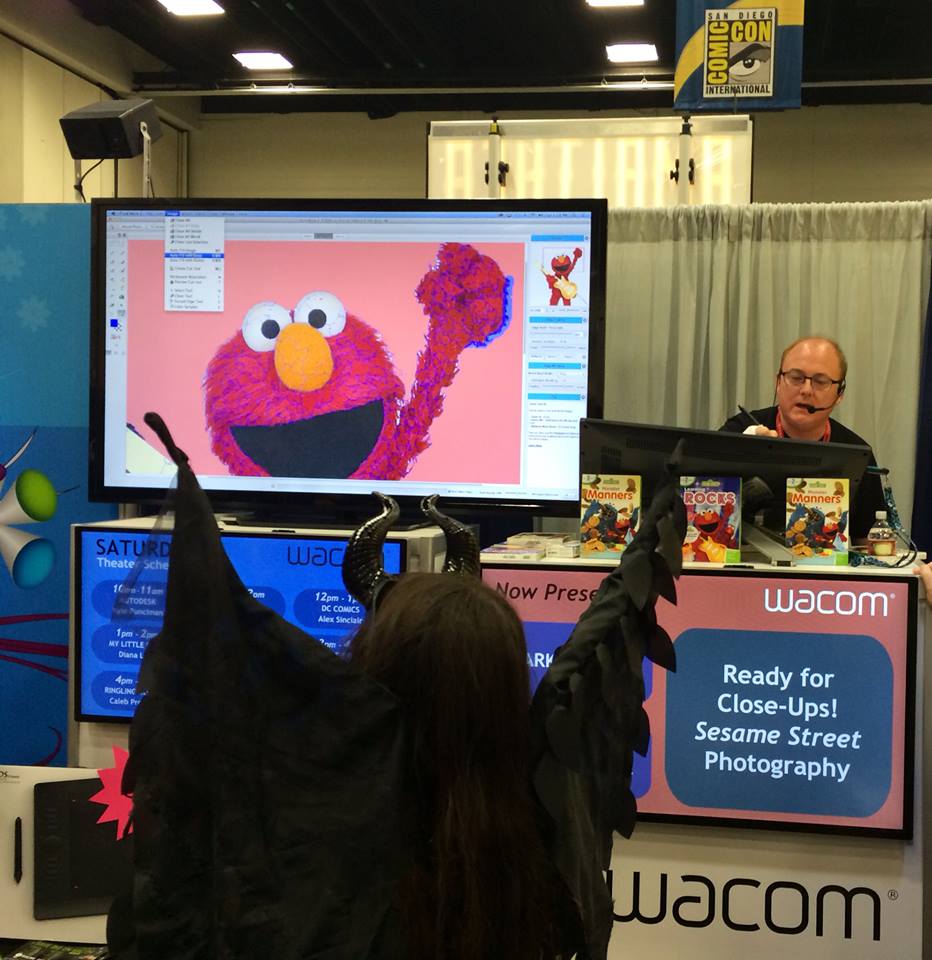 Sesame Street was also represented in the form of Mark Magner, Staff Artist and Design Director for Global Consumer Products at Sesame Workshop, who gave an in-depth presentation of how a Sesame Street DVD cover gets made. Magner went step-by-step through the cover of the cover for “Monster Manners,” from the design by Diana Leto, to the photography session and how important lighting is for Muppets, to the intricacies of using the right photo manipulation software to make the fur look its furriest and the bright-colored Muppets pop, Magner provided valuable insight along with entertaining stories of how he got to work, got to work on Sesame Street. It was a real surprise highlight of the Con.

Hey, remember that Sesame panel that was sold out before we even knew it existed? Well you can watch the entire event online right now! Zachary Levi moderated and it was another fun time. But don’t take my word for it! Check it out above! 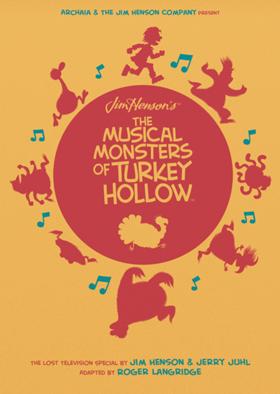 Sesame Street wasn’t the only Henson-related property repping hard at SDCC this year. We were also delighted to learn much more about the upcoming Henson Company comics from Archaia that we be available soon at “The Jim Henson Company: Upcoming Comics with Archaia.” Moderated by editor Rebecca “Tay” Taylor, panelists Jeff Stokely (Jim Henson’s Storyteller: The Witches, Fraggle Rock), Ian Herring (Colorist on Tale of Sand), Shane-Michael Vidaurri (Jim Henson’s Storyteller: The Witches), and Jake Myler (Fraggle Rock) discussed their love of Jim and why they were excited about getting to play in his world, as well as expand on it in exhilarating ways. All of the artists expressed how these projects are a dream come true for them. Vidaurri mentioned that he created characters that he could envision Jim and his team building creatures of, and Stokely talked about how the creepiness that Jim infused into productions like The Dark Crystal and The Storyteller and so he strived to make the story and characters seem very threatening to keep in that vein. On a lighter note – though not that much lighter – Jake Myler talked about how Fraggle Rock was his adulthood obsession and he appreciated how deep the stories can get, so he made sure to bring that out with the upcoming book. While the Fraggles needing water isn’t a 100% original story, the ideas he expressed about discovering new sections of the Rock had me intrigued and I’m very much looking forward to it. And finally, Ian Herring spoke with such enthusiasm for The Musical Monsters of Turkey Hollow that it was impossible for the room to not feel the excitement as well. He mentioned that he tried as he did on Tale of Sand to let color help represent the music in the story and have smaller colors for quieter moments and big, vibrant colors as the monsters get louder and more musical. He also conveyed that one of his favorite Henson projects is A Muppet Family Christmas and that this book will be similar to that in tone, which should make many readers here very happy. 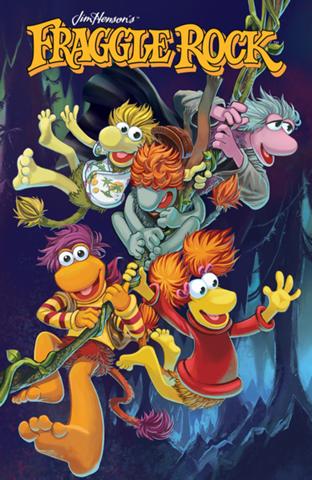 All of the panelists said that while there was some pressure to live up to Jim’s legacy, they never let it get the better of them. Jim appreciated people who made their own style and so they played to their unique strengths and Rebecca reinforced that that’s what Archaia looks for in their Henson projects. Tim Beedle, editor for the first wave of Fraggle Rock comics, sought Stokely out because, as Stokely said, “I wasn’t what he was looking for, and that’s exactly what he was looking for.” They mentioned that doing work you believe in and not just drawing Kermit over and over again fits right in line with Jim’s message of doing your own thing.

Archaia also teased some things we can expect from these books, including photographs of the puppets Jim built for test footage of the special that never came to be, The Musical Monsters of Turkey Hollow; New artwork by Ramon Perez as well as tryout pages from other artists that they passed on for the Tale of Sand hardcover edition; and the possibility of the full scripts for The Storyteller: Witches hardcover and musical/audio components for Tale of Sand and The Musical Monsters of Turkey Hollow. 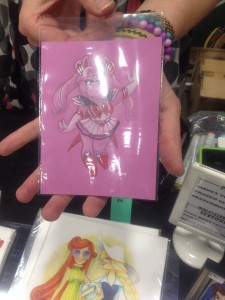 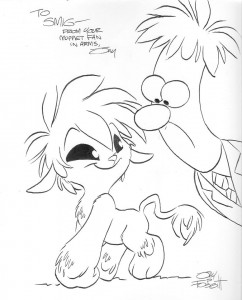 We said hello to James Silvani and Amy Mebberson, who showed us one of her favorite commission this con, a Sailor Moon/Miss Piggy mashup. Boy oh boy does that Amy draw a tough pig! We also ran into Jay P. Fosgitt who drew a couple of Muppet commissions, like this one for our own pal Smig. And we stopped by Katie Cook‘s booth but man, good luck getting to talk to her! She was too busy drawing her little ponies to get to say hi. But we love her anyway. Hi, Katie!

One surprise we had was to see Gonzo and Pepe on display.  The booth was auctioning off movie memorabilia, and these two naked gentlemen were animatronic puppets used in Muppets From Space.  From what we hear, it may not be 100% legit for them to be selling the puppets, but at least they helped to add just a little more Muppet content to the con.  Just, y’know, without the clothes.

While the image above isn’t actually from Comic Con, it’s too adorable not to share.  The aspiring puppeteer in the photo decided that his daughter was too young for the convention, so he put on his own panel for her, featuring Kermit the Frog and Fozzie Bear and what looks like a video presentation of The Muppet Show.  Not only did he totally win Comic Con without even attending, but he officially had more Muppet content than Disney.  Think on that, folks.

So that was our San Diego Comic Con in a nutshell! Did you see anything we didn’t? Be sure to tell us all about on the ToughPigs forum! 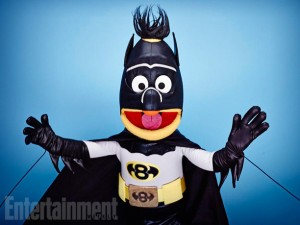 As an added bonus, here’s Bert talking about Entourage, and some other fun stuff from him, Cookie Monster, and Murray:

Many thanks to Dave Hulteen, Chris “Smig” Smigliano, Jerome Green, and Gina Selim for the use of their photos! Click here to put some pants on that prawn on the ToughPigs forum!