Hello again, ToughPigs! We’re back from San Diego with some news, some pictures, and more germs from the Comic Con floor than you can shake a stick at! So let’s get right into the wrap-up for SDCC 2016, shall we? 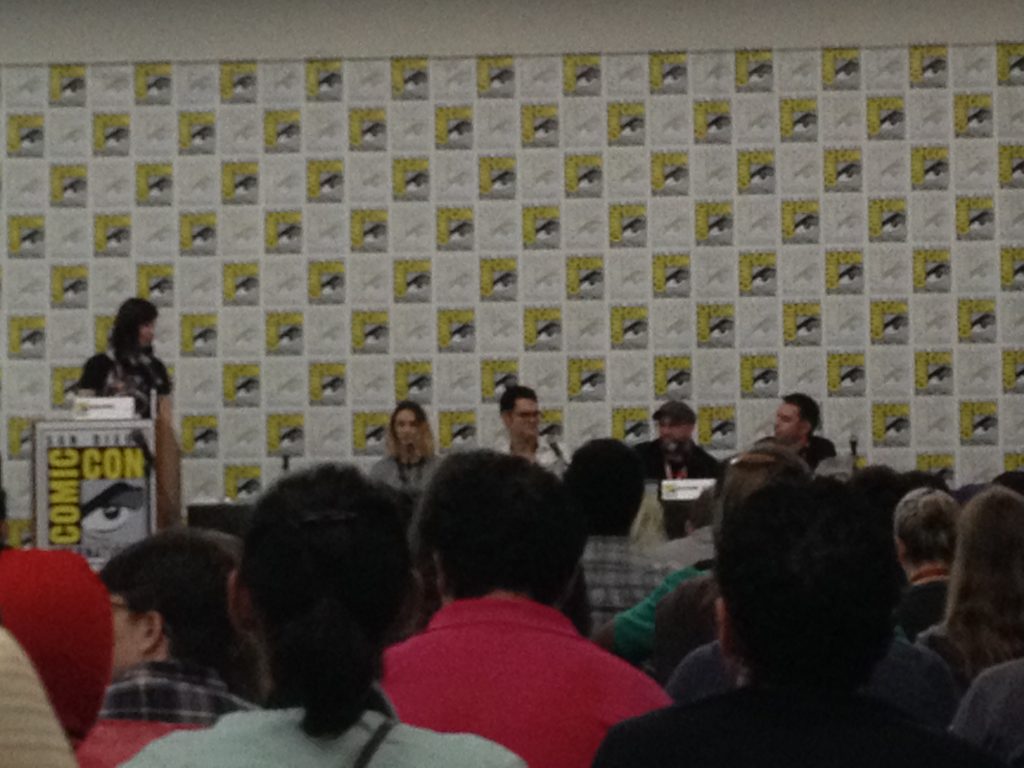 As we mentioned earlier in our pre-SDCC suggestions, the biggest events this year for Henson fans were the Labyrinth and Dark Crystal panels presented by Archaia/Boom! Studios and Penguin Young Readers, highlighting the exciting things to come from the world of publishing for Labyrinth and Dark Crystal fans. If you weren’t able to make it, I’m going to go ahead and give a summary of each, starting with Labyrinth. 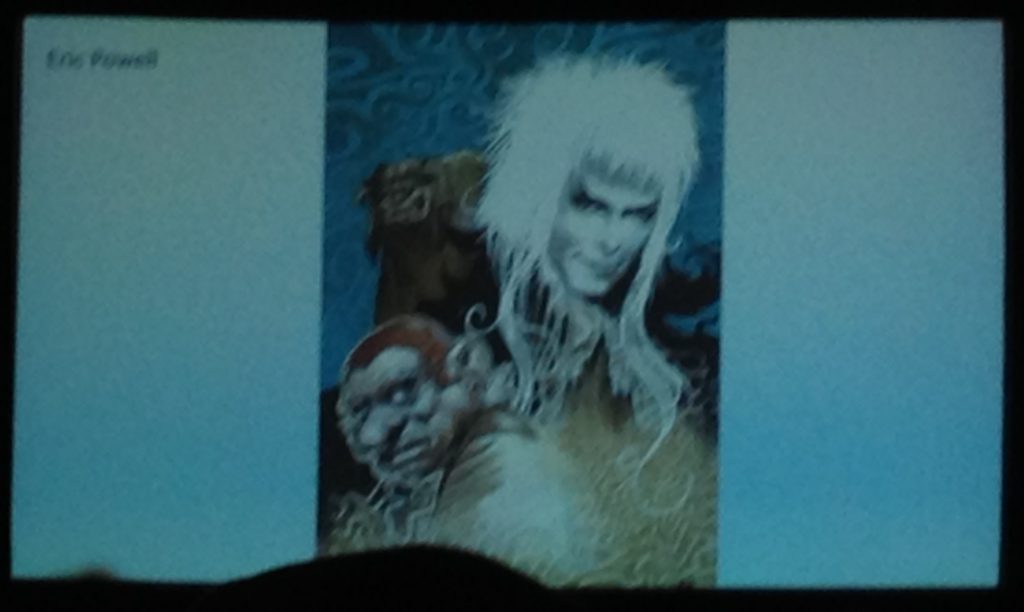 Celebrate the Publishing World of Jim Henson’s Labyrinth with Archaia

The Labyrinth panel kicked off with Nerdist editor-in-chief Rachel Heine proclaiming herself a huge fan of the 1986 film who rented the movie every time her father took her to a Blockbuster (remember those?!). That love fest continued for the amazing movie celebrating his 30th anniversary for the next hour. The conversation centered around Archaia’s three big titles coming up for the big anniversary – Jim Henson’s Labyrinth: 30th Anniversary Special in August, Jim Henson’s Labyrinth: Tales in September, and Jim Henson’s Labyrinth: Artist Tribute in November – all of which I’m sure our regular readers are aware of, and we were treated to some amazing glimpses into the projects by way of artwork previews. On-hand for the discussion were senior editor of Archaia and overseer of the Henson properties, Sierra Hahn, as well as artists Eric Powell, Gustavo Duarte, and Jonathan Case.

A breakdown of the discussions for each of the three books follows: 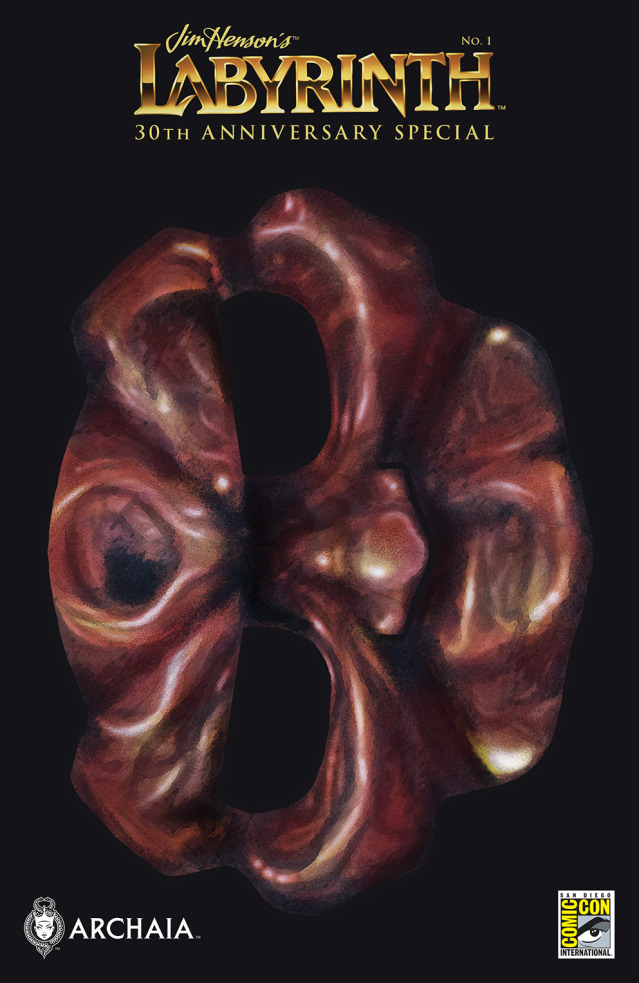 Jim Henson’s Labyrinth: 30th Anniversary Special is a collection of the Labyrinth stories we’ve seen released over the years on Free Comic Book Day, with two brand-new stories included as well as  a hardcover enhancement to preserve the longevity of the tales many of us have already read. The goal is to include all of the stories in one collection so that anyone who missed them when they were released over the years can have a chance to see them presented in this beautiful collection.

We were also treated to a preview of the two new chapters in the ever-sprawling Labyrinth saga – “Humongous Two,” scripted by Jonathan Case with art by Daniel Bayliss, colors by Jen Hickman, and letters by Warren Montgomery, and “Gone Fishing” by Gustavo Duarte – which were both beautifully done and something I’m sure Labyrinth fans will love. I picked up the San Diego Comic Con exclusive (with pop-out mask based on Jareth’s masquerade costume!) and it is just gorgeous.

Jonathan Case mentioned that the film featured so many goblins and he loved all of them, so for his story, he couldn’t wait to dive into their backstories and mix goblins with giant robots to create goblin mayhem! And Gustavo Duarte told the audience that he hears the characters in his head while writing, with Ludo being the most intense.

The book will also feature a special introduction by Dave Goelz, which I won’t go into too much detail so that fans will be surprised when they read it for themselves. But here’s a tidbit – While young and childless, the first time Dave saw the film, he said that he did not get it. And there’s a very moving reason why, many years later, he did, and he regrets never getting to tell Jim what changed his mind. 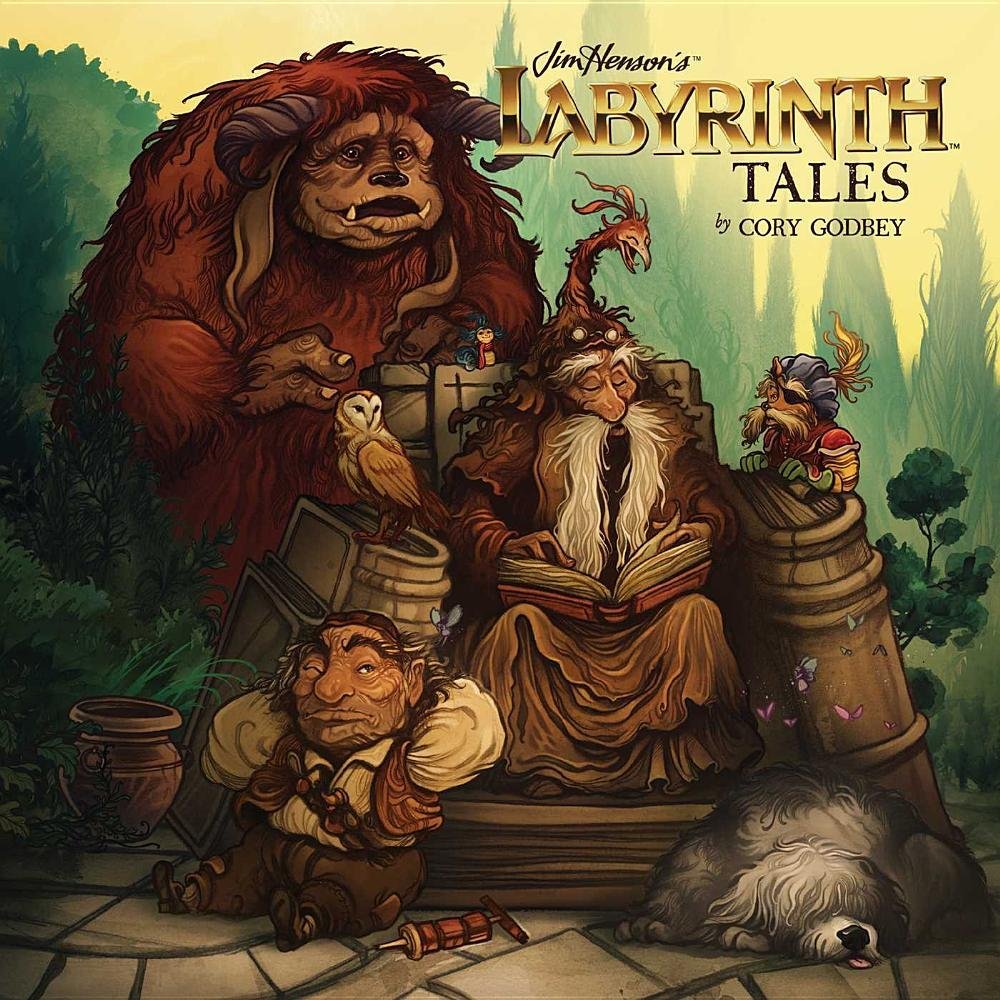 Jim Henson’s Labyrinth: Tales is another collection of stories, but these are all-new short stories and all of which are written and drawn by Cory Godbey, whose works you’ve probably seen in other Labyrinth, Dark Crystal, Storyteller, and Fraggle Rock comics of the past. These are geared more towards a younger audience, but as with most Henson-related things, audiences of all ages will undoubtedly find something to love within its pages. Look for lots of Ludo – everyone’s favorite around the Archaia offices – as well as storybook tales inspired by works like Mouse Guard. 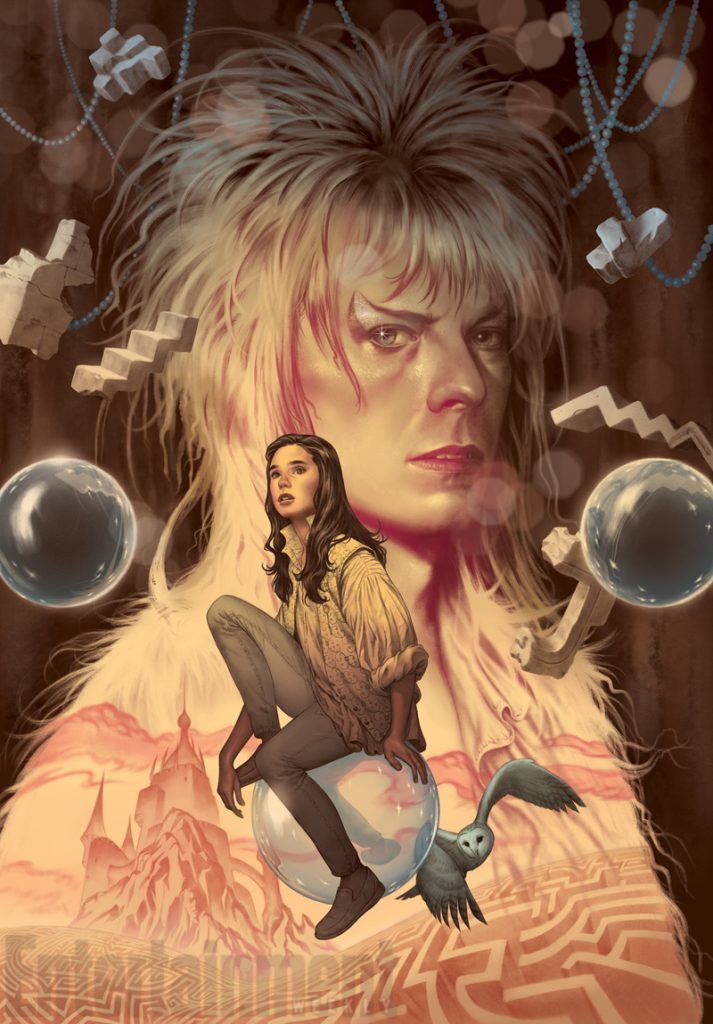 Finally,  Jim Henson’s Labyrinth: Artist Tribute will feature works of art from many, many artists – some of whom Archaia has worked with before, and some of whom are just giant fans of the film. We got to see previews of works by artists like Michael and Laura Allred, Ramon K. Perez, Craig Thompson, Jonathan Case, Luke Flowers, Douglas Holgate, Rebekah Isaacs (with Dan Jackson), Dave McKean, Max Dalton, and many more.

One really exciting thing about this projects was that Archaia editors took to the internet to make sure that fans from all over could be involved. They went to Tumblr and other websites, found pieces they loved, tracked down the artists behind them, and went to Henson to see if they would be interested in working with the fans who have allowed them to do work for 30 years now. Needless to say, Henson loved the idea, and as such we’ll be getting a wide range of artists and styles presented in this book.

Included in the book will also be essays and testimonials about the film, as well as about Jim Henson and David Bowie. The panelists were also quick to mention that they were all saddened to hear about Bowie’s passing, and the editors were sure to work with his estate in bringing the book to life, showing them artwork and seeking their approval and feedback, which the estate was very generous to provide. It was a true labor of love all around that fans will surely cherish.

One last note about the Labyrinth panel: The question was posed as to how much Archaia would be involved in the recently announced film follow-up. While this is still very much a developing film, editor Sierra Hahn said that she hopes that once the film moves forward, Archaia will be involved with comic book tie-ins. But remember! The emphasis is on “hope,” as this is all still in development with the Jim Henson Company.

On another Labyrinth-related note, elsewhere at the con there was this exclusive variant of IDW’s My Little Pony issue 44 with cover art by Sesame Street artist Diana Leto: 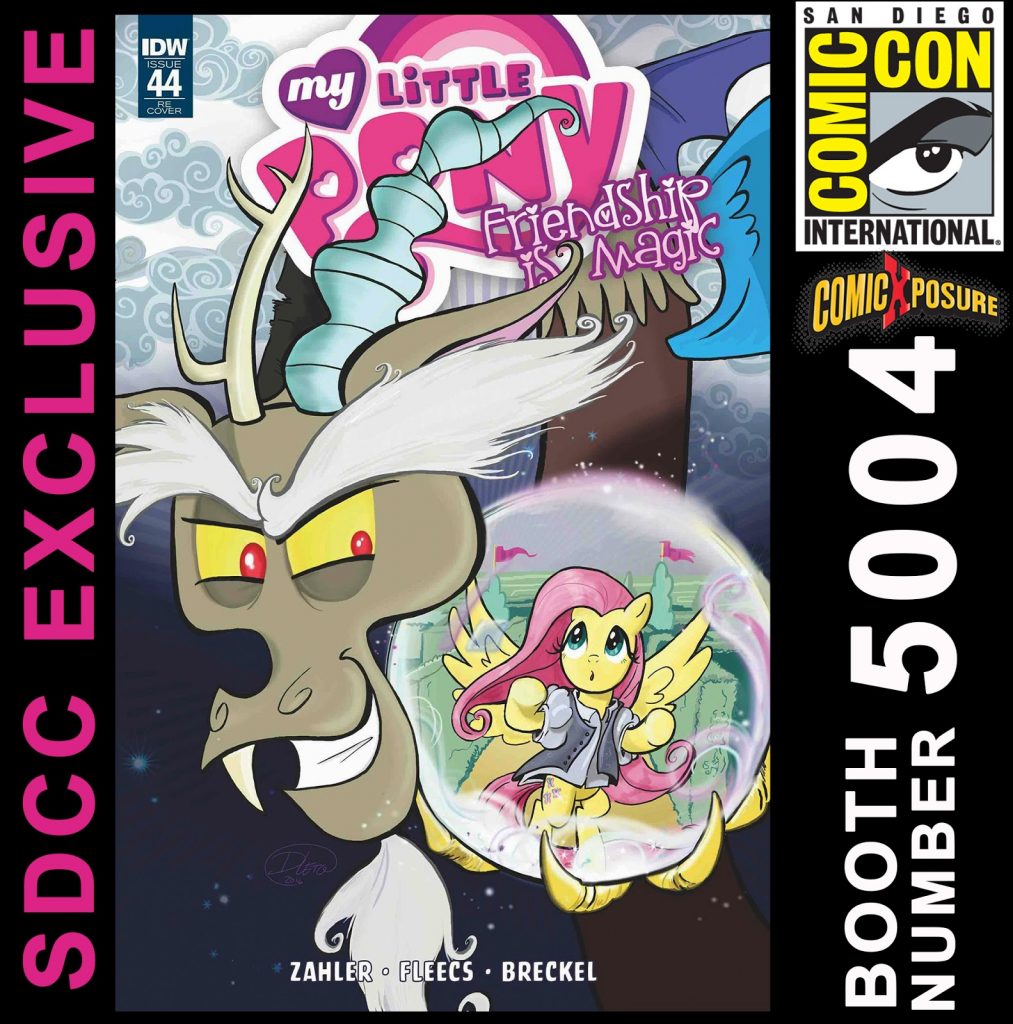 The Dark Crystal’s World of Publishing

The next day at the panel The Dark Crystal‘s World of Publishing, the audience was offered a glimpse into the exciting things Archaia and Penguin Young Readers are doing to keep the spirit and legacy of The Dark Crystal alive. The panel was moderated by The Jim Henson Company’s Executive Vice President of Children’s Entertainment Halle Stanford, and featured author J.M. Lee, Penguin Young Readers editor Rob Valois, and Archaia editor Sierra Hahn (Hey, she looks familiar!).

J.M. Lee – the winner of the Dark Crystal Author Quest spoke about how as a young boy he brought home a crow’s wing to his dad, who thought that might be a good time to introduce him to The Dark Crystal, which is a world he now loves getting to write for. His first novel in a planned trilogy, Shadows of the Dark Crystal was the topic du jour and was inspired by Lee’s short Ring of Dreams, chosen from over 500 submissions to the contest. Lee was influenced by series like His Dark Materials (which contains the book The Golden Compass), Chronicles of Narnia, and the book The Last Unicorn.

Lee felt that there was a Y.A. novel hidden in the world of The Dark Crystal.  The story is a coming-of-age prequel centered around the young female Gelfling, Naia, set many years before the film. Lee felt that even though Kira is present in the original story and is very proactive, she serves a lesser role than Jen does and as such it is really his tale. Lee wanted to bring a female P.O.V. to the forefront in his story and that is why he created Naia. Furthermore, he introduces an ancient matriarchal society in the world of Thra, while focusing on the different clans of Gelflings that existed. There was also much talk of the world of Thra, and what had to be added and adapted by the Penguin team with Lee.

While the original film laid much of the groundwork, they built up from there in simple things like maps of the world, the naming of creatures we saw but never knew the names for, as well as vocabulary that would existing in this other plane. This was very much aided by Lee’s background in linguistics. The next book in the trilogy will be titled Song of the Dark Crystal and although I haven’t had a chance to read the first novel yet, Lee’s passion was palpable and got me very excited to read it in the near future.

Looking forward to other worlds of publishing, Archaia announced that similar to their 30th anniversary celebration of Labyrinth, next year is the 35th anniversary of The Dark Crystal, and while she couldn’t say too much about the plans in the works, fans can expect some things very similar to the releases they have this year for Labyrinth. The question was also raised as to why The Dark Crystal: Creation Myths was more focused on the past, and that is mostly due to the editors and writers not wanting to step on anything Jim wrote too much. Both publishers work very closely with Brian and Lisa Henson and everyone at The Jim Henson Company, and Lisa is the guiding force they all credit with making sure that whatever projects are in motion, there is no overlap and the continuity stays intact.

There were also some insights into the world and how it evolved – this was the first time I remember it being confirmed that the Urseks are not originally from Thra, but somewhere else! The question was also posed that famously Jim has created the world of The Dark Crystal first and then went on to create the story – something that could be called a bad idea based on how ill-received the film was when it first came out – so how do the writers of today approach their own writings, whether it’s world first or story first. Lee answered that the groundwork of the stories are already laid in that there was so much world-building that Jim did already, that his job is to express text over visuals that already exist, so he writes his story to fit into the world.

Normally, here is where we would have a huge wrap-up on other panels and things we saw on the floor, but this year was regrettably pretty light. We spotted some new toys at the Diamond Collectibles booth… 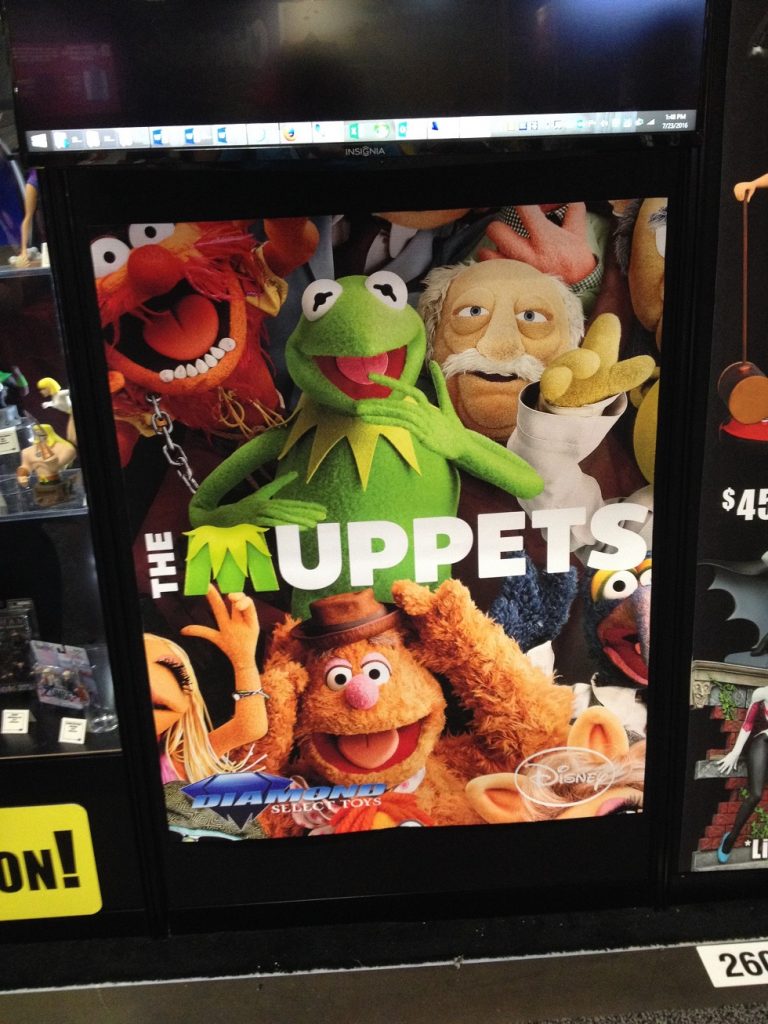 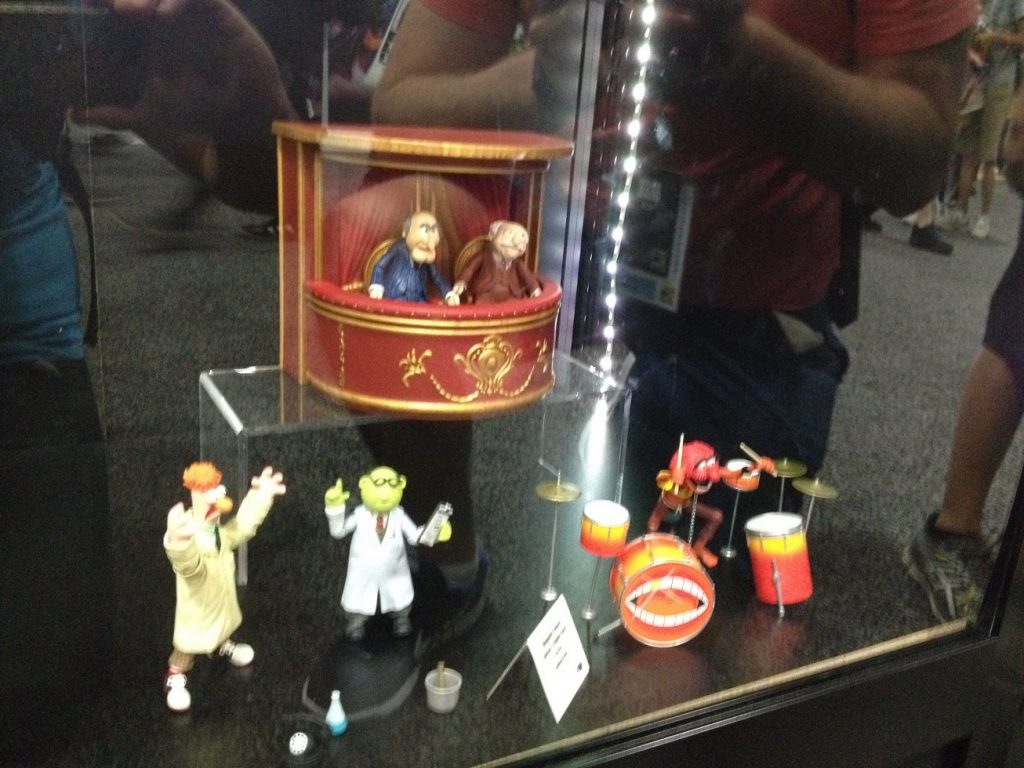 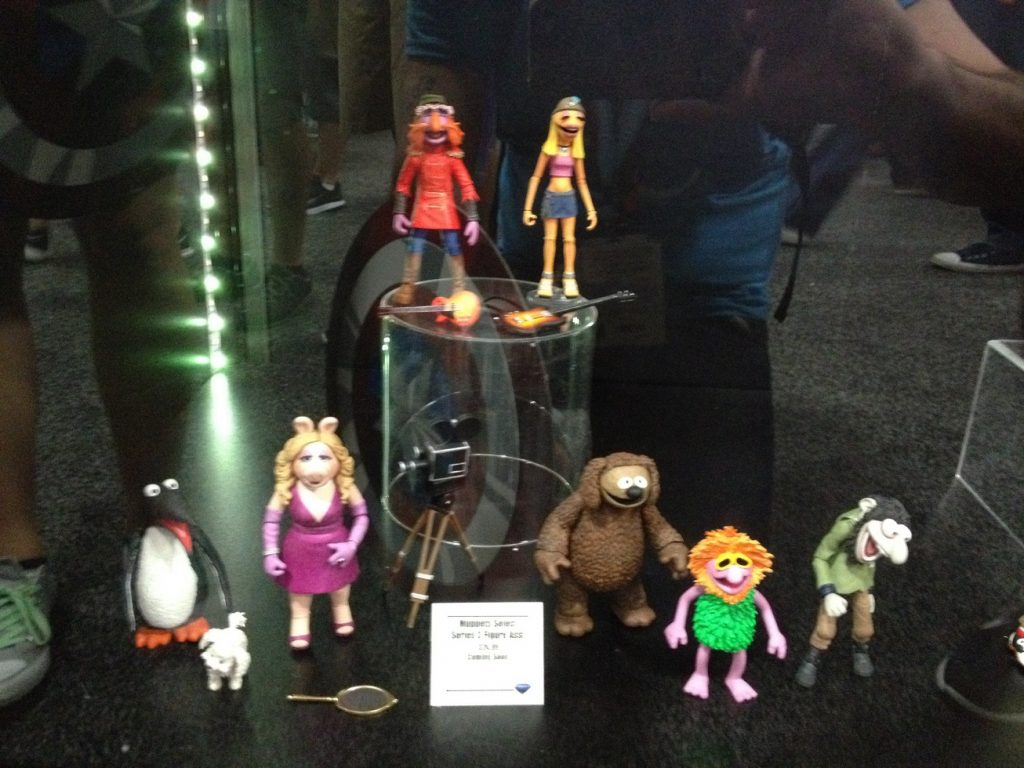 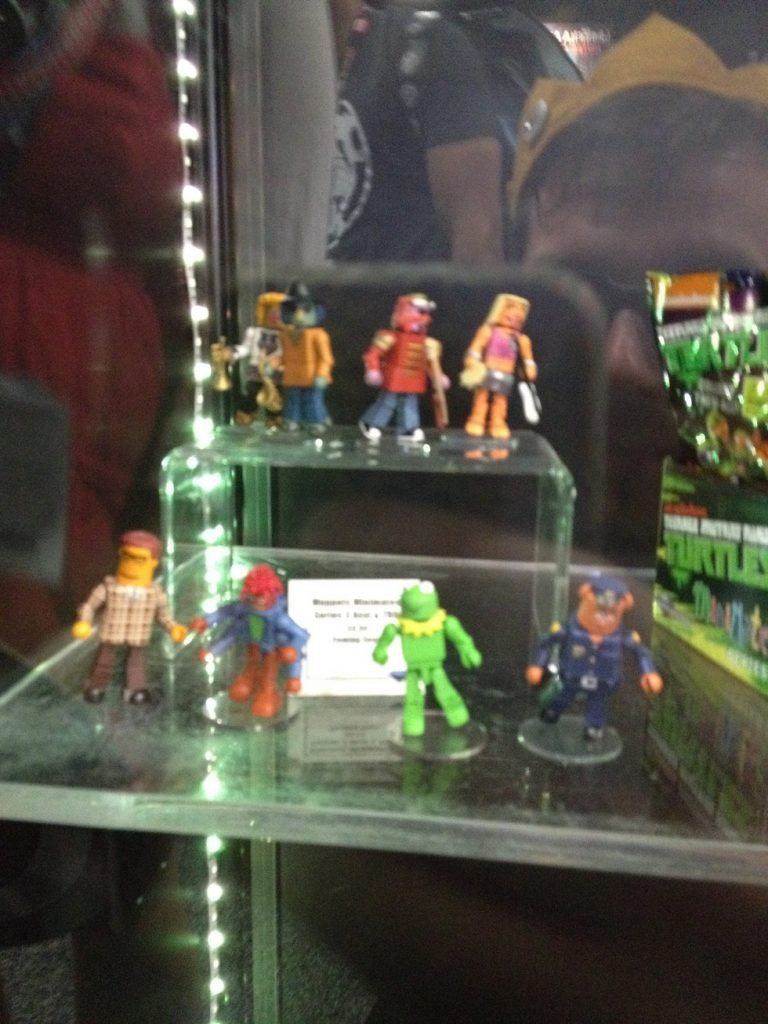 And some old toys at some various sellers’ booths (Including a Professor Hastings doll – what?!?!)… 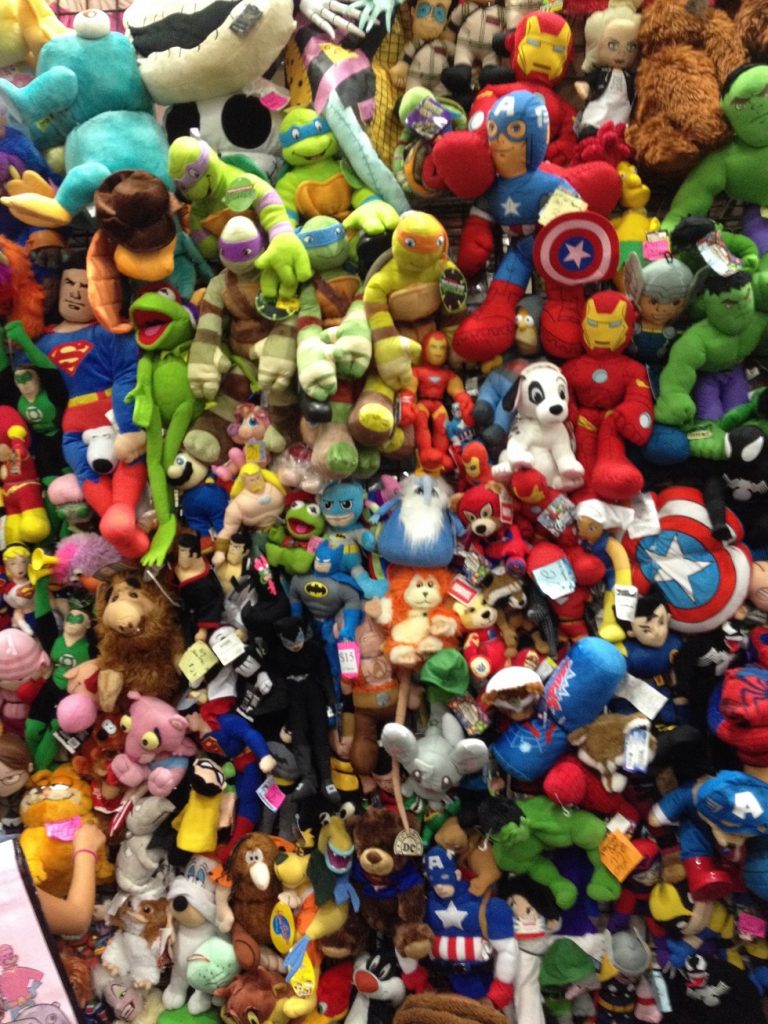 Can you spot the Muppet? 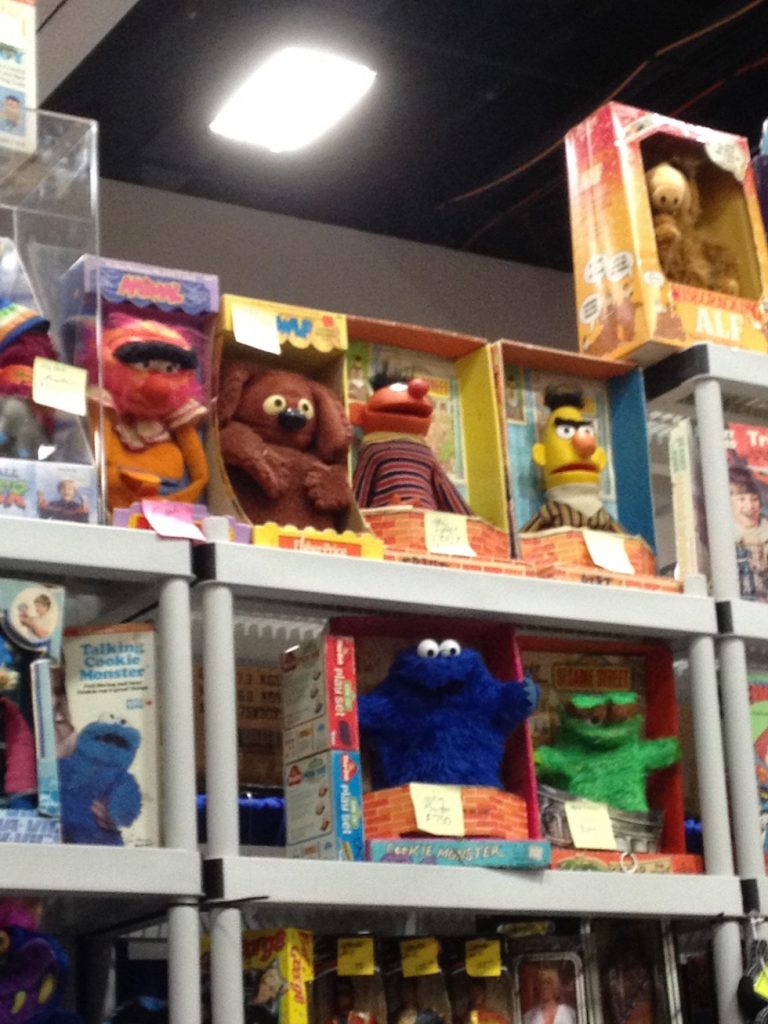 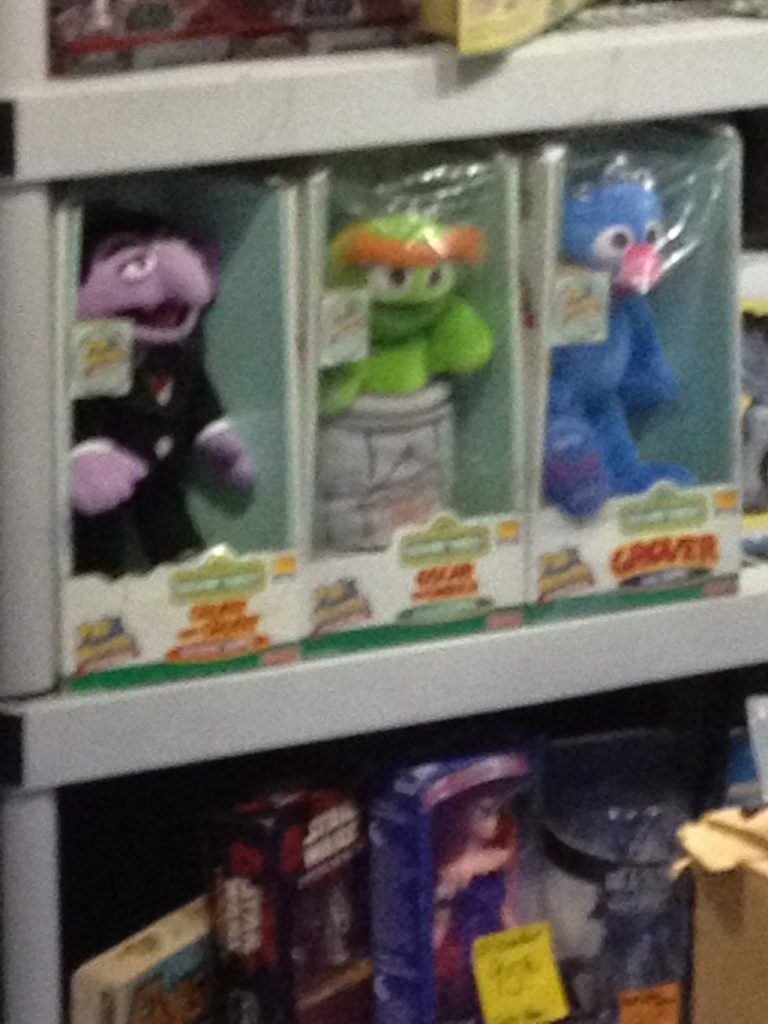 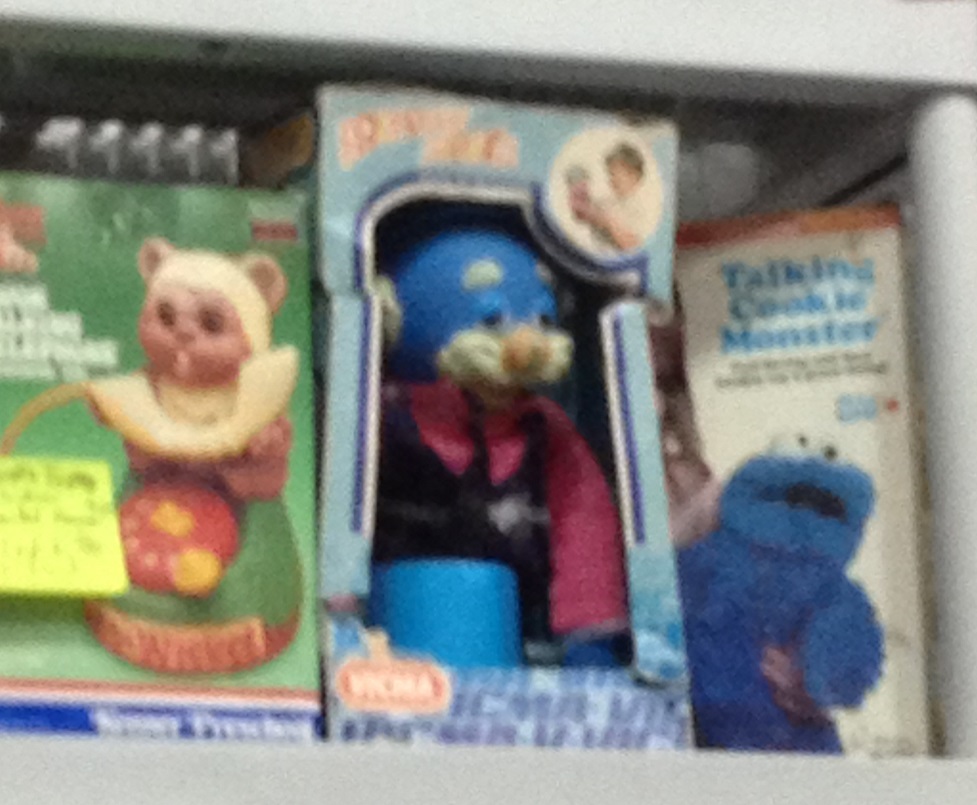 And a couple of cosplays here and there… 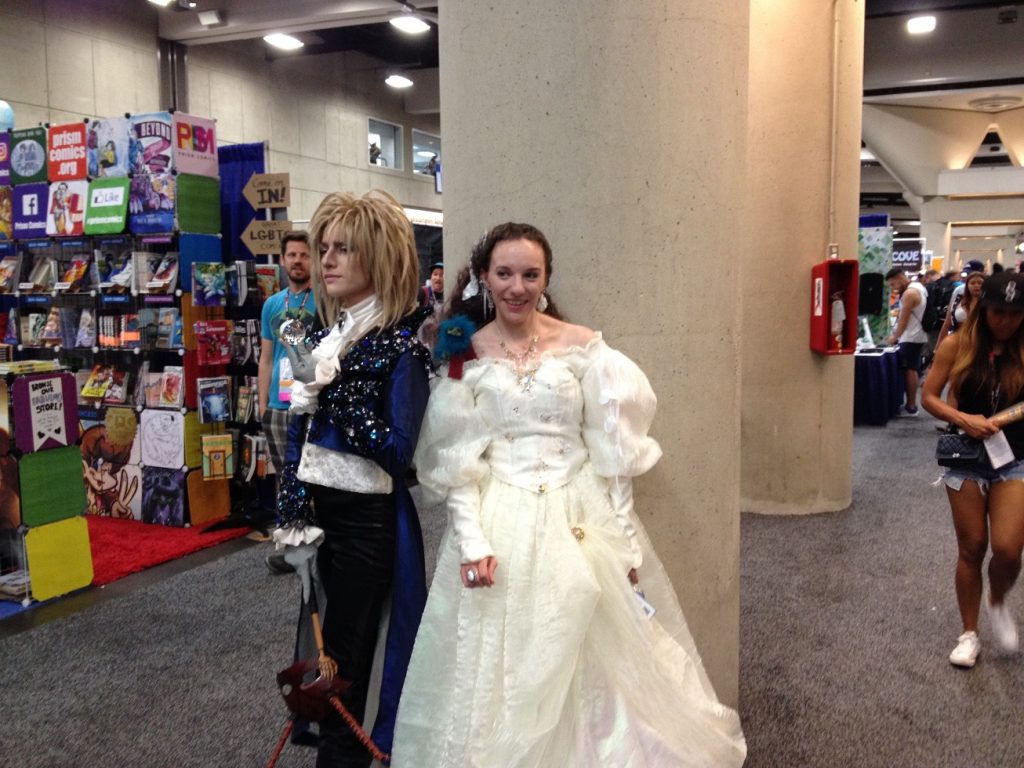 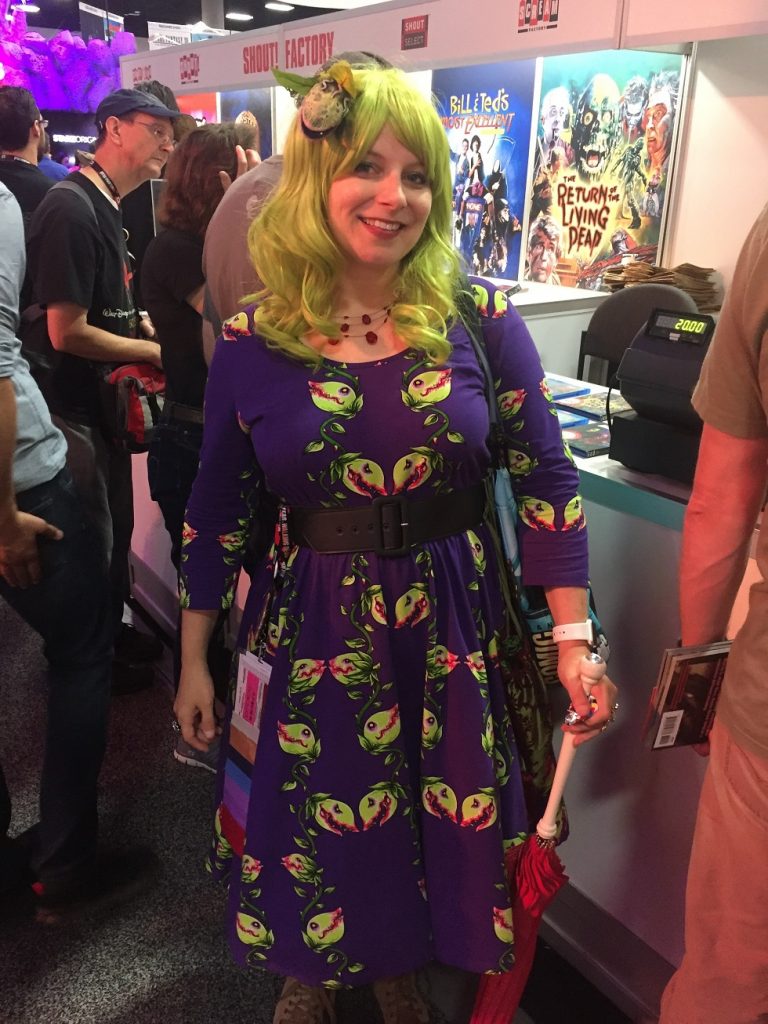 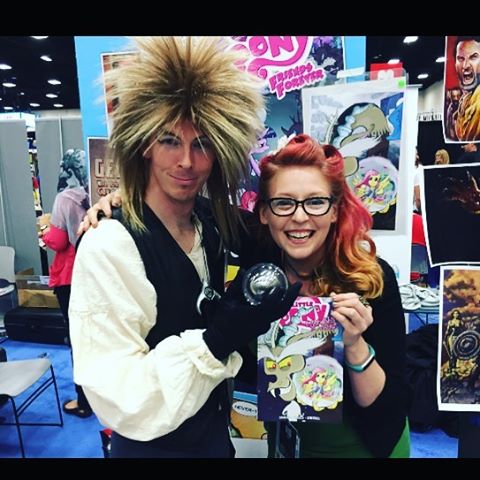 That’s Diana Leto, the artist who did that My Little Pony cover! (On the right.) 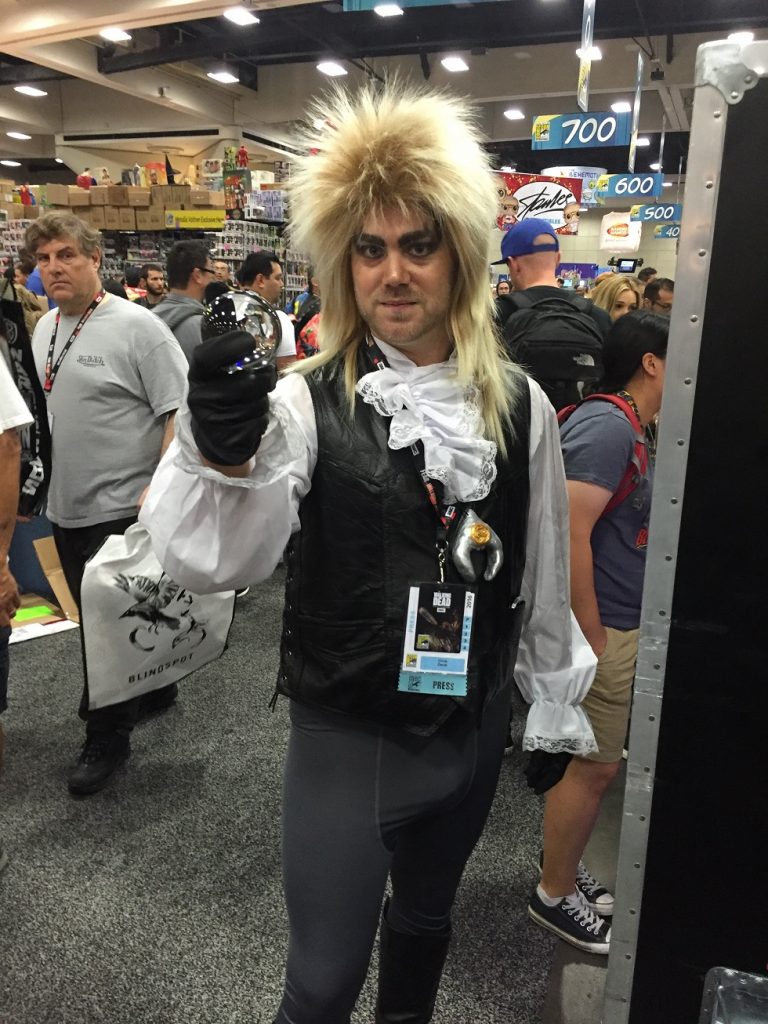 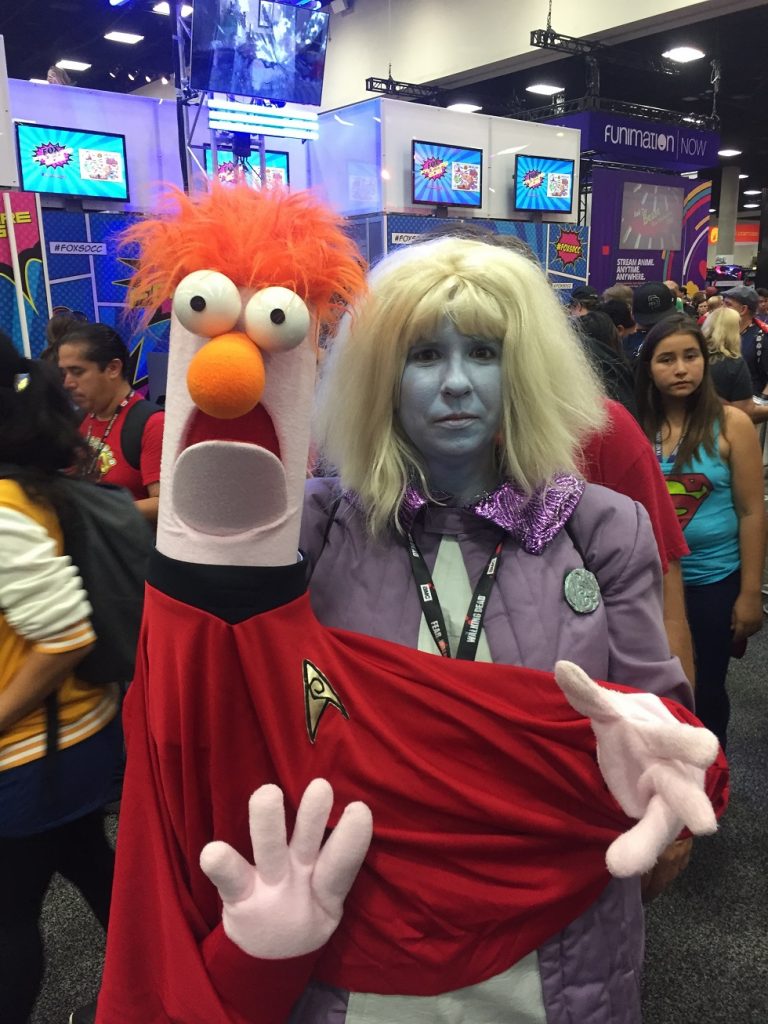 But other than that, this year will be a much quicker round-up than most. Let’s all use this as motivation to get more Muppets on the floor next year!

Special Cosplay Shoutout: Ryan Wells is an accomplished cosplayer with an amazing attention to design and detail. Although ToughPigs didn’t get to see it on the floor in person and in action, he created and built an astonishing Garthim costume that you can check out here. 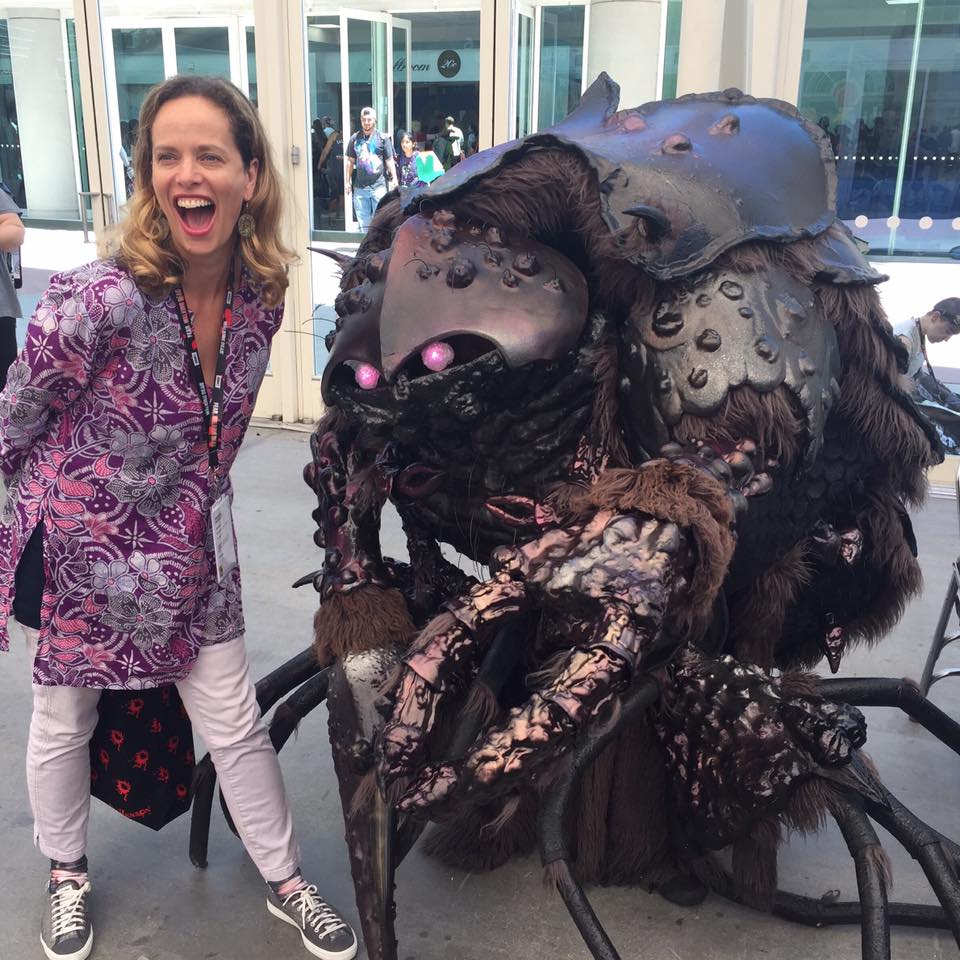 All in all, another fun-filled San Diego Comic Con for ToughPigs! Thanks to everyone we saw on the floor who posed for us, every writer/artist/editor who talked to us, and every Red Bull representative who kept our hearts pumping to a probably-dangerous degree! See you next year, San Diego!

Click here to mix goblins with giant robots on the Tough Pigs forum!