Is there anything more we can possibly learn about Jim Henson? We’ve read The Works and the Brian Jay Jones biography, we’ve watched all the making-of specials, and read all 34,000+ articles on Muppet Wiki. Surely there can’t be anything more, right? Well, former Happy Days star Ron Howard believes he may have answer for us.

Deadline reports that Howard and Brian Grazer’s production company Imagine Documentaries is developing a new documentary about the life and work of Jm Henson, with Howard set to direct. The report claims the Jim Henson Company and family have their full support behind it and there’s promise of archival material we may have never seen, so that sounds promising. I do hope it fares better than his other movie involving a green, non-human protagonist.

The documentary is also being produced by Disney Branded Television under their Disney Original Documentary header, meaning this is likely going to Disney+ in the future. There’s no confirmed date of release or the actual outlet it will be released through, so we’ll be sure to keep you posted on any future developments!

Click here to wonder what kind of shaving cream Jim used, if any, on the Tough Pigs forum! 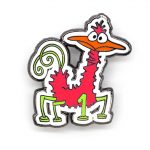