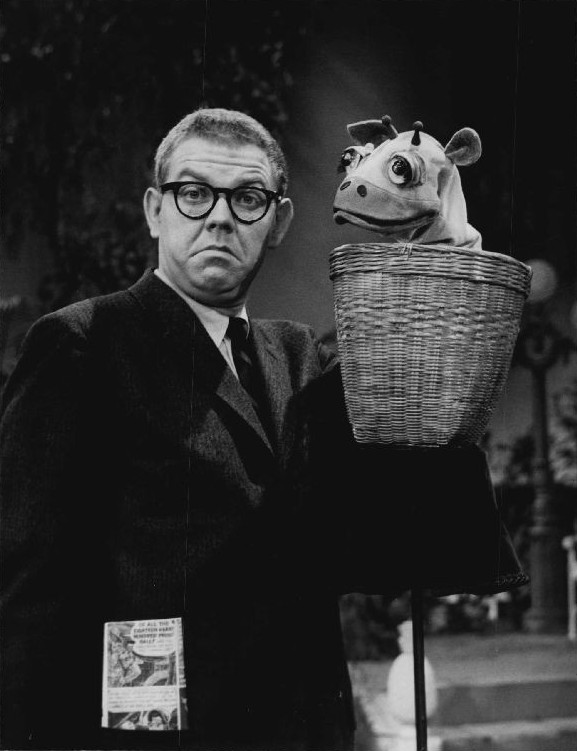 Yesterday afternoon, the son of comedian/writer/director/actor Stan Freberg reported on social media that Freberg had died at age 88. He lived a long life, but it’s still a major loss to comedy and to show business in general, and his the great legacy he leaves behind includes an interesting place in Muppet history.

Jim Henson’s works influenced and shaped the sensibilities of millions of people over a few generations, and if you ever do any reading about Jim’s background and who his own cultural influences were, a few names always come up.  Stan Freberg is at the top of that list.

Throughout the 1950s, Freberg made dozens of comedy records spoofing current hit songs, TV shows, and pop culture.  Jim Henson loved listening to these records so much, he flat-out took them for his own use in his first TV work.  Sam and Friends was a five-minute show, so having those early Muppets lips-sync to Freberg records like “C’est Si Bon” and “I’ve Got You Under My Skin” was the perfect way to pass the time.  Among the Muppets’ first appearances on network television was a spot on The Steve Allen Show, in which they mimed to his version of “The Yellow Rose of Texas.”

As the story goes, Freberg was initially upset upon learning that some upstart young guy with puppets was using his songs without permission, but once he saw Sam and Friends he changed his tune, sending a telegram to Jim and Jane, which Muppet Wiki has preserved:

=JIM HENSON AND JANE NEBEL AND ALL MUPPETS:
=DON’T PHONE, DLR BY 10 PM NBC TV WASHDC=
=I TAKE IT ALL BACK AM OUTRAGED TIME RAN OUT AND DID NOT GET TO SAY THIS IS ONE OF THE GREATEST ACTS I HAVE EVER SEEN. AM HONORED TO LET YOU USE MY RECORDS FOR EVER AND LONGER. LOVE AND KISSES TO ALL. THOSE SUITS WILL COME BACK SAM, YOU’LL SEE=
=STAN FREBERG=

Eventually, Jim and Stan Freberg met, and even talked puppets.  Freberg was also a puppeteer, playing Cecil the Seasick Sea Serpent and various other characters on the hugely popular kids’ show Time for Beany.  He was fond of telling the story of meeting Jim Henson and showing him how to move his hand to manipulate Kermit’s facial expressions.

Even when the Muppets did their own original material in those early years, the Freberg influence occasionally surfaced. The bits performed on The Ed Sullivan Show featuring Kermit trying to play “What Kind of Fool Am I” only to be interrupted by Grover, or a string quartet attempting to play Beethoven only to be thwarted by the wild drumming of Mahna Mahna, have a lot in common with some of Freberg’s musical comedy singles.

It doesn’t seem to come up often in discussions of their respective careers, but Jim and Freberg were also contemporaries in the world of funny commercials.  Working in the same time period, they both redefined notions of what advertising could be.  They both did ads for Esskay Meats, and they each did ads for different brands of chow mein (the Muppets for La Choy and Freberg for Chun King).  Just like Jim Henson, Stan Freberg sold a lot of food to TV viewers by making them laugh.

If you’ve never heard any Stan Freberg, you can check out episodes of his radio show for free here at the Internet Archive. Or seek out Stan Freberg Presents The United States of America, which is one of the best-loved comedy albums ever produced.  When you do, it’s easy to imagine Jim Henson listening and chuckling along.