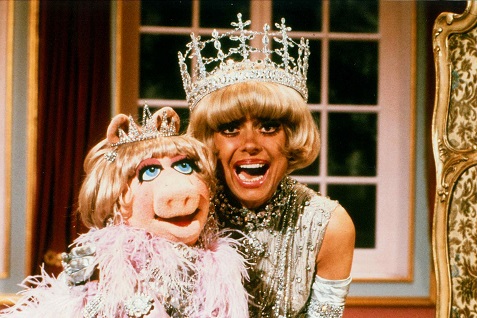 As reported by NPR and others, actress and singer Carol Channing has died at the age of 97. Channing’s best-known role was as the title character in the original Broadway production of Hello, Dolly!, but she had a long career, in which she entertained thousands of audiences. It’s likely that most Muppet fans of a certain age first encountered Channing on Sesame Street, where she sang “Hello, Sammy” with a snake and taught us all about the letter S and reptiles:

A few years before that, she was a guest star on a season four episode of The Muppet Show, in which she played an eccentric silent film star, performed “Jeepers Creepers” with some large-eyed Whatnots, and sang “Diamonds Are a Girl’s Best Friend” — another song she originated, in the musical Gentlemen Prefer Blondes  — with fellow show-business legend Miss Piggy:

Carol Channing was a great fit for co-starring with Muppets, and she leaves behind an impressive legacy of music and comedy.