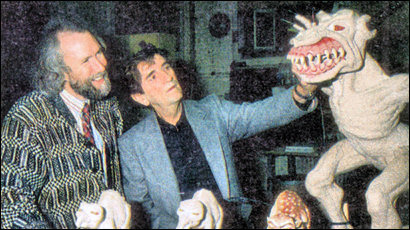 As The New York Times and others have reported, Harry Dean Stanton died on Friday at the age of 91.  Stanton was a prolific character actor, having appeared in a million things from Alien to Repo Man to The Avengers to the Rip Van Winkle episode of Shelly Duvall’s Faerie Tale Theatre.  As Henson fans, we also remember his performance in Monster Maker, one of the most unusual episodes of The Jim Henson Hour.

In the show, Stanton played Chancey Bellow, a movie special effects guru who runs an animatronics company not unlike Jim Henson’s Creature Shop.  He brought a quiet wisdom to the character, who mentors a troubled young man, providing a grounded counterpoint to the scenes featuring the enormous monster the Ultragorgon.  (You can find our write-up of that episode here.)  It was a characteristically good performance from an actor who will be missed.