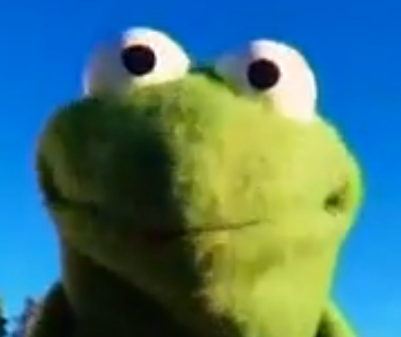 This afternoon, Ricky Gervais posted a video on his Facebook page with the description “Literally the best Christmas greeting I could ever receive.” It appears to be a personal greeting from none other than his Muppets Most Wanted co-star Robin the Frog, so it’s hard to argue with Gervais’s designation. I’m pretty sure you can view it by clicking here even if you’re not logged in to Facebook (I was going to say “If you don’t have a Facebook account,” but what kind of weird caveperson these days doesn’t have a Facebook account?).

However, as nifty as it is, the video also served to expose the general public’s ignorance when it comes to identifying Muppet frogs.  Despite the fact that Robin is smaller and sounds younger and doesn’t have a collar and his eyes are different, confusion was in the air. Take a look at some of these comments: 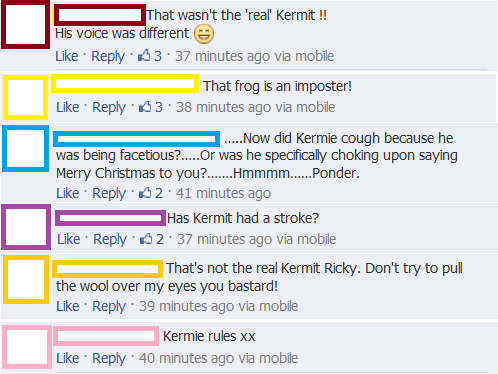 Lest you despair for all of humanity, though, there were a handful of people who knew their amphibians:

So there you have it. Tune in next time when we’ll probably see people mistaking Annie Sue for Miss Piggy.

Click here to pull the wool over our eyes on the Tough Pigs forum!