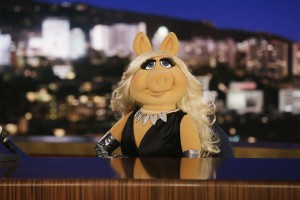 There are a few elements that good comedy stories require. And episode four of The Muppets, “Walk the Swine,” has most of those things. There are some great characters, and some decent, if not well-trodden, plots. Presented here are three plots that we’ve seen in plenty of sitcoms, and instead of playing them out with a completely over-the-top, Muppetational twist, they’re played pretty straight-forward and therefore not 100% hitting the mark. So while there are laughs throughout, this is the first time I’ve watched The Muppets and have had more dislikes than likes. And that makes me sad, because I really like this show overall. So where did this episode slip up? I’m going to try to disassemble my feelings to find out.

One of the things that all good stories need is resolution, and we’ve seen in the past that The Muppets isn’t always the best with that. Miss Piggy never learns a lesson. Same goes for Statler in episode four, after giving him the perfect set-up to explore some deeper character traits. And that same problem sours the story between Scooter and Rizzo in this episode. There’s a real conflict here, and there’s lots of build-up to a good head-to-head at the end. The comedic heightening of Rizzo having a more ridiculous relative and solution each time is fantastic. But there’s no solid conclusion to it, no resolution. We don’t meet one of these rat relatives and see them actually do a good job to make all of Scooter’s car troubles go away, nor do we see any sort of comeuppance for Rizzo, perhaps in damaging his own car (P.S. How funny was it to see tiny Rizzo sitting on a stack of books to reach the wheel of his huge Jeep?). Either of these would have been a satisfying ending to that story. Instead we’re left with it all hanging in the air, like both of your hands should be when you approach Cousin Frankie. A well-placed button would’ve done wonders to bring this one home and it’s a little upsetting that it didn’t have one. 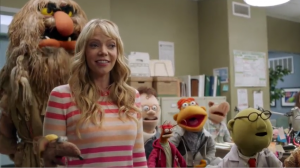 Another essential ingredient of a good story is motivation. And while the Miss Piggy A-story has it (misguided revenge), and so does the Rizzo B-story, mostly (not getting sued, I guess), the Fozzie C-story is sorely lacking a real impetus. As I mentioned, all three of the plots are sitcom tropes we’ve seen before. But the story of Fozzie the comedian making fun of his girlfriend is one that seemed out of character for me. Now that’s not to say that he wouldn’t do that – we’ve seen Fozzie harass plenty of his friends for a laugh he so desperately craves – but it was the set-up that was all wrong. There’s no meaning behind it. He just goes from telling his same, stale jokes to laying into his girlfriend’s sweatiness. The one-minute scene that was missing was Fozzie confessing to the writers trio that he needs new material while also letting it slip that his girlfriend has over-productive sweat glands, so a romantically clueless Gonzo eggs Fozzie on to joke about that on stage. It would fit everything else they’ve done before and give him the ill-advised motivation he needs. To turn from terrible Catskills jokes to insult comic was too dramatic a turn without a proper reasoning behind it. Although I must admit, I cracked up when he pulled out the umbrella. That was a nice touch. Still, I give major kudos to this plot line having a solid, heartwarming-in-a-weird-way resolution. Until it didn’t. Man, Fozzie was a jerk in this episode. 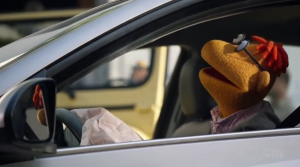 So while I felt that the Fozzie/Becky story was missing a beginning, and the Scooter/Rizzo story was missing a ending, I don’t believe that the Miss Piggy/Reese story was missing anything. This was the real bright spot of the episode. We know why there’s a feud, we see it play out to ridiculous heights (while still brining attention to Habitat for Humanity, which was nice!), and we get to see some real emotion and depth to Miss Piggy after the incident at the work site. I don’t think there’s a disingenuous bone in her body (er, metaphorically speaking) when she cries in front of Kermit about how embarrassing the whole situation was, and how she actually felt bad. And we got to see something we rarely, if ever, have seen from Miss Piggy – an apology. And as over the top as her apology was, that’s exactly how she would say she’s sorry. It completely fit everything in her character, flamboyant but still coming from an authentic place. Not to mention the amazing puppetry it involved. When those dancers were carrying around a still-singing Miss Piggy, my girlfriend asked me, “How are they doing this?” My reply was, “I have no idea, and I absolutely love it!” Plus Reese Witherspoon’s reaction faces alone throughout this whole episode were fantastic. So it’s great that after talking about it for years, Kermit finally got to work with Reese.

Many sitcoms have trouble finding their footing in their first season. The breakneck speed of story and jokes can be hard to figure out. Scrubs had the same issues, as did 30 Rock, and Parks and Recreation, and many, many others. So while this episode had some missteps, I’m still extremely hopeful that they’ll be sorted out very quickly in the future. 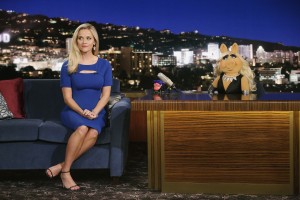 Best Joke:
Becky: Says the shrimp in the turtleneck and gold chain. You look like you’re in a Boyz II Men video!
Pepe: Hey, you dress for the job you want to have, h’okay.

Recycled Pilot Joke Alert: As far as I could tell, none! Maybe they’ve mined everything from the pilot presentation that they wanted.  But hey, we got a variant of the old “Herd of cows” joke!

Missed Opportunity: Crazy Harry at the Habitat for Humanity worksite, trying so very hard to resist blowing it up.

MVP (Muppet Valuable Player): Miss Piggy – who doesn’t always hit the mark for me – blew me away in this one. She had an arc that rang true, and another of my favorite lines: “I grew up on a farm! I built cows and milked fences!”

Best Guest: In common with episode four, there was only one guest star this time, and Reese Witherspoon does an amazing job throughout. “I mean, did you see my movie, Wild? I did all my own walking in that movie, so …”

Obscure Character Watch: While not their first appearances, I’m still blown away that it’s 2015 and I watched an episode of network television featuring Beautiful Day Monster and Behemoth in the background. Stunned.

Song Watch: While the Miss Piggy apology song was terrific, the “True Colors” sing-along was my favorite musical moment.

Adultiest Content: Uncle Deadly helping Miss Piggy remove her spanx made me realizes that he’s often helping her undress. So while it’s all implied, they are featuring some Miss Piggy nudity. I guess it’s okay though since they’re heavily implying that he’s probably gay, which is both progressive and bold of the writers and producers.

One More Thing: Kermit’s subtly placed twisted paper clips when talking about starting his car were an incredible touch.

Okay, One More One More Thing: How did they do that paper bag breathing thing? A straw underneath? Sometimes the simplest tricks in puppetry are the most impressive. 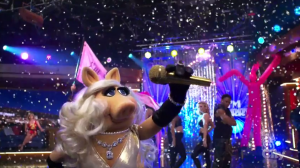 Click here to apologize profusely on the ToughPigs forum!