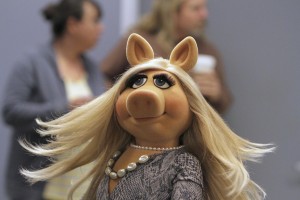 Now that the Muppets have their own TV series again, they finally have an opportunity that they haven’t seen since Muppets Tonight, and that they have literally never utilized – Long-form storytelling.  I’m sure every episode will stand on its own, but due to the nature of the format of the show, they can drop seeds that will be picked up episodes later, give the characters story arcs, and not feel burdened by having to fit a beginning, middle, and end to every plot element by the end of their 22 minutes.

That said, there’s a good mix of The Muppets either not taking those elements far enough and not utilizing them very well.

First, looking at what we’ve seen of Miss Piggy so far in the series, she’s been sort of insufferable.  She’s been exploding at Kermit, stalking celebrities, and willing to ruin her own show for selfish reasons.  We’re not getting much reason to root for her, let alone understand why anyone would tune into Up Late with Miss Piggy.  In “Pig Out”, it certainly seems like the Muppet crew is getting their first taste  of “fun Piggy”, giving us a glimmer of hope for her to play down her obnoxiousness and eventually become a more sympathetic character.  And she really is fun, singing karaoke and taking selfies and bringing in her celebrity friends.  But by episode’s end, we are returned to the status quo and Miss Piggy has seemlingly learned nothing. 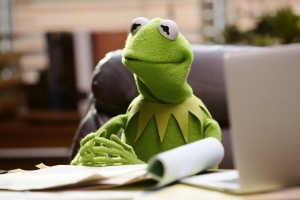 In a perfect world, Miss Piggy would’ve realized the importance of her position as a boss or why work needs to come before fun and made the decision to take herself out of the game.  Instead, Kermit tricks her into inflating her own ego, and she almost seems stupid for being manipulated so easily.  Don’t you think Miss Piggy should have a chance to do the right thing by her own accord?  And knowing that she could potentially lose the first real friends she’s had in order to keep the show running smoothly and allowing the Muppets to hold onto their jobs would add a real sense of pathos to her story.  It also would’ve set up a domino effect that would reverberate through her season-long storyline of being a hollow diva with greater needs than fancy dresses and celebrity parties.

Meanwhile, a few feet to the right, Sam the Eagle has developed a crush on Janice.  While this plot point really came out of nowhere, I’m a little torn on my feelings.  On one hand, there’s so much comedy potential for the straight-laced Sam to harbor feelings for a spacey free spirit like Janice.  On the other hand, I’m a little disappointed that every female character on the show is mostly defined by being a love interest for a more prominent male character.  With only about three female characters, that doesn’t offer a whole lot of diversity.  Also, his crush seems to have already crossed a line when he admits to following her home.  Not cool.

But we need to remember that this is only chapter one in the Sam/Janice saga, and it could go anywhere.  But seeing as it’s only one of a couple ongoing storylines (the others being the Kermit/Piggy/Denise love triangle and Fozzie’s new girlfriend, neither of which have had any traction since the pilot), it seems out of place to start a story without finishing it, or at least closing out a portion of it to give us a more self-contained episode.  Maybe this sort of writing will be fine after a few more episodes, but for now, it just feels like something important was abandoned on the cutting room floor. 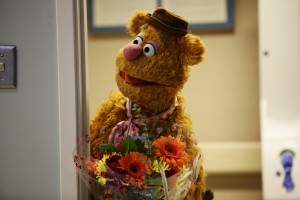 The third non-moving storyline is the odd but familiar pairing of Fozzie and Statler.  Now, I can’t blame the writers for this because what’s missing is clearly just in my head, but I’m calling it a missed opportunity nonetheless.  How great would it be if we finally got a little backstory on Statler and Waldorf?  And their reasoning for hating on Fozzie so much?  And why they keep on showing up to watch a show that they clearly hate?  But no, instead we get to see Statler harass Fozzie because he’s doing his job the best he can with no repercussions.

This B-plot was the dud of the episode for me.  I honestly just feel bad for Fozzie, I don’t understand Statler’s motivations at all, and the potential for splitting up Statler and Waldorf (which has happened, what, maybe twice before?) is completely underused.  Who knows, maybe the writers will bring this plot point back, but I’m not optimistic.  Mostly, it’s just sad to see a great streak of classic Fozzie material end here, as he was clearly the show’s MVP for the first chunk of episodes.

Now, I’ve complained a lot in this review, but aside from the Fozzie/Statler storyline, I enjoyed it very much.  Seeing the Muppet gang do karaoke is exactly the sort of thing I wanted to see when I first heard that they’d be doing a show about their personal lives.  We got some great one-liners, and some fantastic background jokes that I didn’t catch until my second viewing.  (For example: The Swedish Chef licking donuts and then putting them back on the craft services table, Miss Piggy reading “The Diva Code“, and Kermit looking for Pepe under the writer’s room table.)  I probably laughed out loud less in this episode compared to the others, but there was a real sense of fun throughout, which is way more important in a Muppet show.

So while the episodes are individually strong and funny and interesting, the next step will be the connecting pieces.  Here’s hoping those recurring storylines get a bit stronger as we move forward. 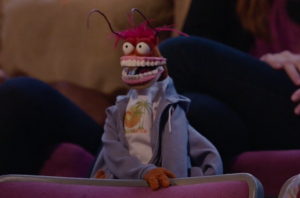 Best Joke: Although it’s not strictly a joke, I loved Pepe’s “Bradley Coopers” impression.  It was equal parts disturbing and shocking, with Pepe’s signature mispronunciation of people’s names to send it over the edge.  I LOLed.

Recycled Pilot Joke Alert: The Swedish Chef makes “Swedish sushi”.  Honestly, this one wasn’t all that funny the first time around.  Although I did like Miss Piggy’s reaction as she politely declines the disgusting concoction.

Missed Opportunity: Aside from what I’ve already mentioned, I would’ve wanted more of the Muppets having fun at Rowlf’s Tavern.  Though we did get to see Beaker’s uncanny impression of Miss Piggy, which was not only spot-on, but funny on several different levels.

MVP (Muppet Valuable Player): Most definitely The Swedish Chef, who had some rapping skillz none of us knew about.

Best Guest: For the first time since the show began, we only have one celebrity appearance in Ed Helms.  He doesn’t overshadow the Muppets at all, but he still gives a solid performance. They probably could’ve made the exact same story without him, but he was used well for such a small role.

Obscure Character Watch: I didn’t catch any characters that we hadn’t seen before.  Crazy Harry was in the background, Yolanda got a few good lines (and a great bedhead hair style), Lew Zealand is back in his trademark puffy collared costume, and Uncle Deadly claims to be great at hiding… things. 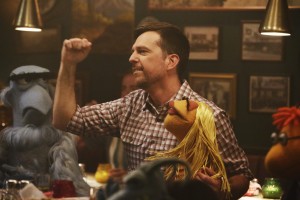 Song Watch: I counted seven songs during their karaoke jam.  They are:

I love the strange combinations of characters, and some of the song choices are absolutely spot-on.  Hopefully there will be a lot more karaoke in The Muppets‘ future!

Adultiest Content: Without a doubt, it’s when Bunsen and Beaker are seen wearing each others’ clothes.  What exactly happened?  I guess we’ll never know, since it happened outside of work hours.  (Though we have some theories on their strange relationship.)  Coming in a distant second is Statler saying “arse over tea kettle”, which may be the closest the Muppets have ever come to saying the word “ass”.

One More Thing: Although Miss Piggy has had the more publicized revelation that she’ll be dating celebrities, we’ve actually seen more celebrity flirtation from Janice.  Piggy had a dalliance with Josh Groban, but Janice has been seen making flirty eyes (is that why they’re always closed??) with Nick Offerman and Ed Helms.  Maybe Kermit and Floyd can start a “working with your ex while she flirts with celebrities” support group together.

Okay, One More One More Thing: I will never unsee Scooter without glasses.  Never, ever. 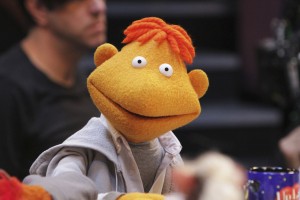 Click here to keep your glasses on your face on the ToughPigs forum!