Last year in the midst of another Melbourne lockdown, I decided to splurge a little and bought myself one of the Oculus Quest 2 Virtual Reality headsets.  I’d had some of the crummier VR headsets earlier, the kind where you use your phone and get headaches after 4 minutes, but this was a proper one designed for longer usage.  Immediately I fell in love with it, drawing in VR, playing paintball, pretending to work in an office while a computer yelled at me.  Then my friend Josh bought one, and we started looking for multiplayer experiences.  We’re both big fans of the computer minigolf game Golf With Your Friends, so we were excited when we found a VR game called Walkabout Mini Golf.  Over the next few months we played every course they had available, exploring areas, flying around the place.  It was our go-to VR game.

So you can imagine my delight when I learned that the company behind Walkabout Mini Golf, Mighty Coconut, had collaborated with The Jim Henson Company to create a full 18 hole course based on Jim Henson’s 1986 beloved classic, Labyrinth!.  I was even more delighted when they gave me an advanced look at the game!  Then they gave my friend Josh an advanced look too so he could join me!  So much delight!

And delight might be the best word to describe the entire experience of playing Walkabout Mini Golf’s new Labyrinth course, which was released yesterday and is now available.  Because, holy cow, it’s incredible.  From the first hole in Sarah’s bedroom, to courses throughout the Labyrinth and Jareth’s castle, this game is jam packed with references and characters.  More than once I shouted to Josh (who, keep in mind, has never seen the film, but more on that later) ‘OH, IT’S (insert name)!’.  Hoggle rocks up early on, but we also see The Worm, Ludo, Didymus and The Four Guards (who made me get another stroke because I forgot which one was the good one).

What struck me most was the design.  It’s amazing to see how well the movie’s characters lend themselves to a low-poly look.  Hoggle’s already wrinkled face is gorgeous, and I wish we’d seen more of him throughout the game.  Ludo is massive, and because this is in VR I got the full scale of him.  He has a dominating presence as you stand in front of him, but he’s still the gentle giant we know and love.  The Wiseman sleeps while his Hat looks around nearby during one of the rounds.  Sir Didymus and Ambrosius hang out in a bog.  That cave filled with talking hands made for one of my favourite levels.  I’m not sure I recall seeing any of the Fiery’s or the Junk Lady, however I should note that I only played the game in Normal Mode, and I know Hard Mode had a couple of changes, so it’s possible they were featured there.  Speaking of Hard Mode, I won’t give much away, but there’s a super fun scavenger hunt we tried out without playing the actual course.

The course design blew my mind.  One of the features of Walkabout Mini Golf is the ability to fly around, which usually I’m using to make stupid jokes to Josh.  With the Labyrinth course though, I often told Josh he’d have to wait before we moved to the next hole because I was too busy marvelling at the detail in the course from above.  Most impressively – they built a full Labyrinth!  Like, if you wanted to, you could enter and move around the entire world built and solve the maze.  That doesn’t seem necessary, especially in the areas players don’t go while actually playing.  But it’s those little touches that really blew my mind.  The famous stair scene (you know, the MC Escher painting, Family Guy Crazy Stairs etc) hurt my brain a little the first time I saw it, with the physics changing depending on where your ball ends up.  It feels like you’re in that scene, including seeing Baby Toby climb around the staircases.

As I said earlier, my friend Josh hasn’t seen Labyrinth, but he wrote this statement for this review:
Even as someone who (shockingly) hasn’t seen Labyrinth, it’s clear Mighty Coconut put a huge amount of love and care into this release. They really threw everything they had into making this course the best DLC pack they’ve put out yet. Even not knowing who Hoggle and co. were, I still had a real sense of awe and wonder just walking around this massive course – it really makes you feel tiny and a part of a living, breathing fantasy world.

I’m definitely not saying you should go and buy an Oculus VR headset JUST for this game (it’s a fun luxury item though if you can afford it), but if you already have one you need this game and this course, or if you know someone who has one, then maybe throw them a few bucks and explore the world Might Coconut have created.  I legitimately can’t wait to get back in and play Hard Mode and see what else they have to offer.  I’m so impressed with the work the entire team put in to this game, and I can’t wait to see what they do next.

I got the chance to play the first half of the course with the team behind it at Mighty Coconut. Well, kind of, my headset died towards the end. But we were also joined by the one and only Karen Prell! Yep, I played minigolf with Red Fraggle. You can watch the full stream below!

Click here to putt a ball at a goblin on the ToughPigs forum! 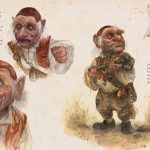