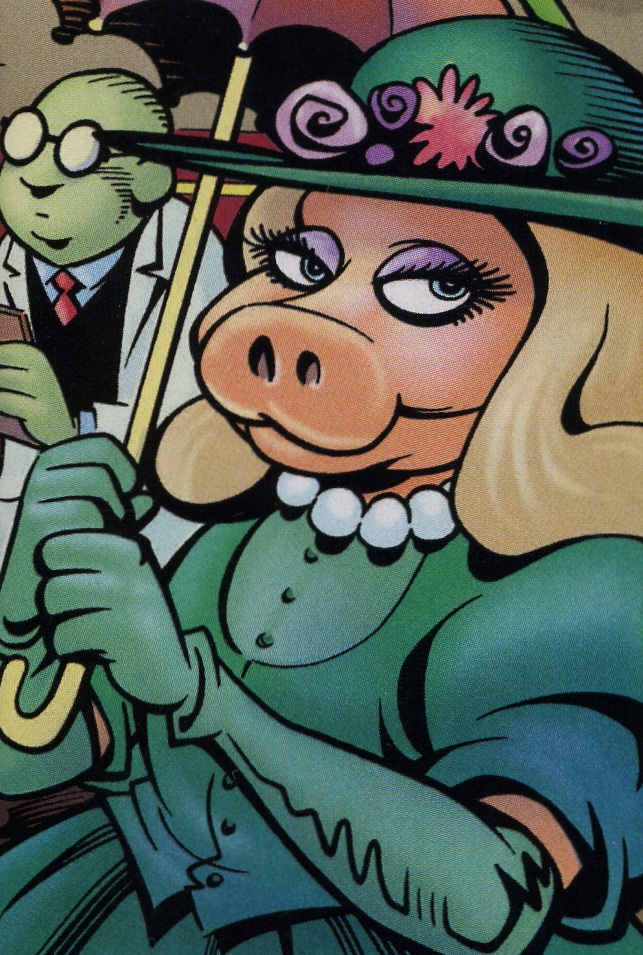 It’s been a long time since we had a new Muppet Show comic book.  For months and months, publisher Boom! Studios and writer/artist Roger Langridge brought us brought us a plethora of great Muppet comics, featuring familiar sketches, delightfully off-model Muppets, and musical numbers implausibly but effectively rendered in ink on paper.  Then Disney bought Marvel Comics, Boom! lost the Muppet license, and the Muppet comics went away.

We knew there was one finished four-issue arc we hadn’t seen yet.  It was called “The Four Seasons,” and we were expecting it in late 2010.  But seasons went by, the winter of our discontent gave way to the spring of our frustration and the summer of our being really cheesed off at Disney, and there was no sign of the comics.  But last week, the first issue of “The Four Seasons” — originally intended as the second issue, but who’s counting? — saw the light of day at last as a Marvel comic, which means you can finally spring on over to your local comic book store and buy it. (There was also something in there about the comic book being published it Italy before it was available here, but I confess I didn’t really follow that part of the story.)

Let’s talk about the cover first.  Roger Langridge drew a cover for the issue when it was going to be a Boom! comic: 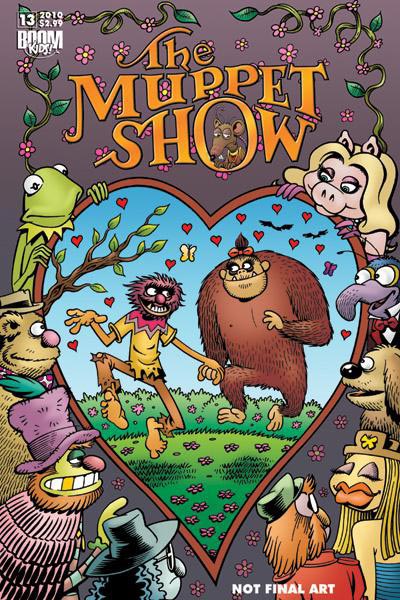 “Not Final Art” indeed!  The Marvel people commissioned a completely different cover by two completely different artists whose names are not Roger or Langridge (They’re Elisabetta Melaranci and Silvano Scolari, and I’m going to assume they came on board for the Italian publication): 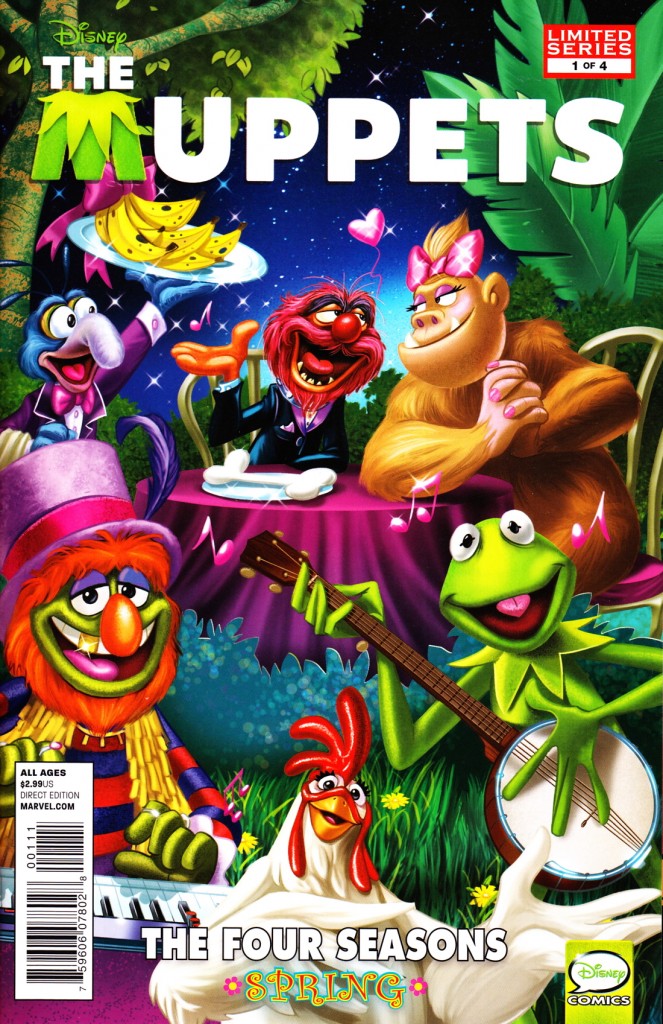 I was prepared to hate the new cover, but I have to admit it captures the spirit of the story inside pretty well.  And it’s a million times better than the extremely bland cover Marvel used for that one reprint last year.

By the way, did I mention this was a Marvel comic book?  In case you forget while you’re reading it, there are lots of helpful reminders — of thirteen ads seen in the issue, eleven of them are for Marvel comics or products.  I don’t suppose they ever considered throwing in an ad for The Muppets on Blu-ray.

Speaking of which, this is the first “new” Muppet Show comic book we’ve gotten since the film was released.  The telethon sequence of The Muppets did a great, fan-pleasing job of recreating the format and feel of the classic show, and we were all happy as clams, penguins and/or singing cactus to see that Segel & Stoller and Bobin pulled it off. But “The Four Seasons: Spring” provides a reminder that Roger Langridge did the same thing for issue after issue without really making a big deal of it.  His Muppet Show comic never had to dramatically reunite the Muppet troupe or depict them rehearsing like crazy to put on the old show again. He just gave us a really solid episode of the show every month, and he even filled the backgrounds with obscure Muppets familiar to us geeks, just like the movie did.  Of course, a comic book is a lot cheaper and faster to produce than a major motion picture, but still: Props to Mr. L. 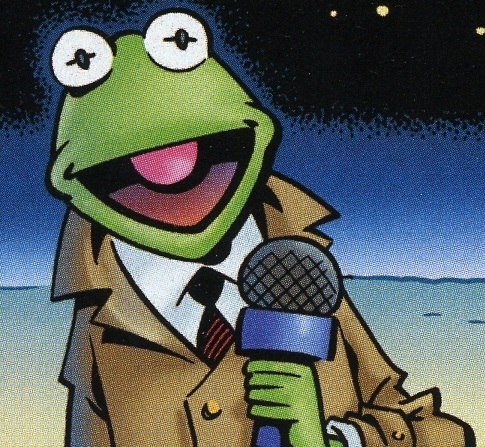 As you might expect, “The Four Seasons” is a four-part storyline about Frankie Valli and his bandmates guest-starring on The Muppet Show.  JUST KIDDING! LAWLZ!!!  Actually, I think the “Four Seasons” theme will prove to be mostly a gimmick to tie the four issues together so it can be called an arc.  There are a few “spring” puns and some stuff about love, but really, there’s not an abundance of spring-related content in this issue.  Kermit and Piggy don’t even wear their famous “Zing Into Spring” outfits!

The onstage material is fun as usual, and includes a Koozebane sketch, a few musical numbers, and a Pigs in Space sketch… in which the crew’s uniforms are completely miscolored.  It’s not that hard to do a Google image search for “Pigs in Space” and see that Piggy’s skirt isn’t blue and none of the pigs wear bright red shirts, is it? 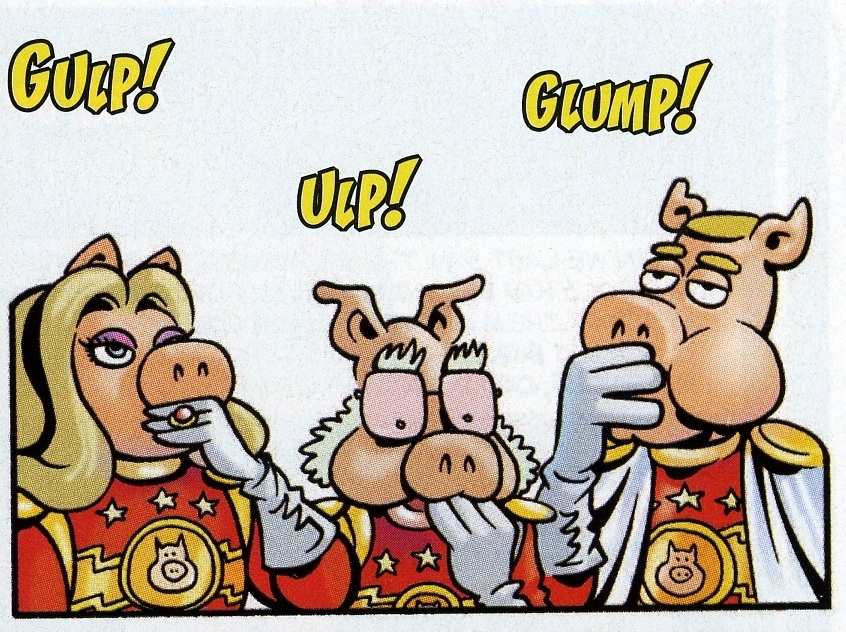 There’s also a special guest performer: Meredith the gorilla.  She doesn’t actually do much in the show, but she drives the backstage action when Animal develops a crush on her, and the page depicting their courtship is maybe the funniest in the issue.  Her presence in the theater even manages to annoy Piggy, which seems about right. 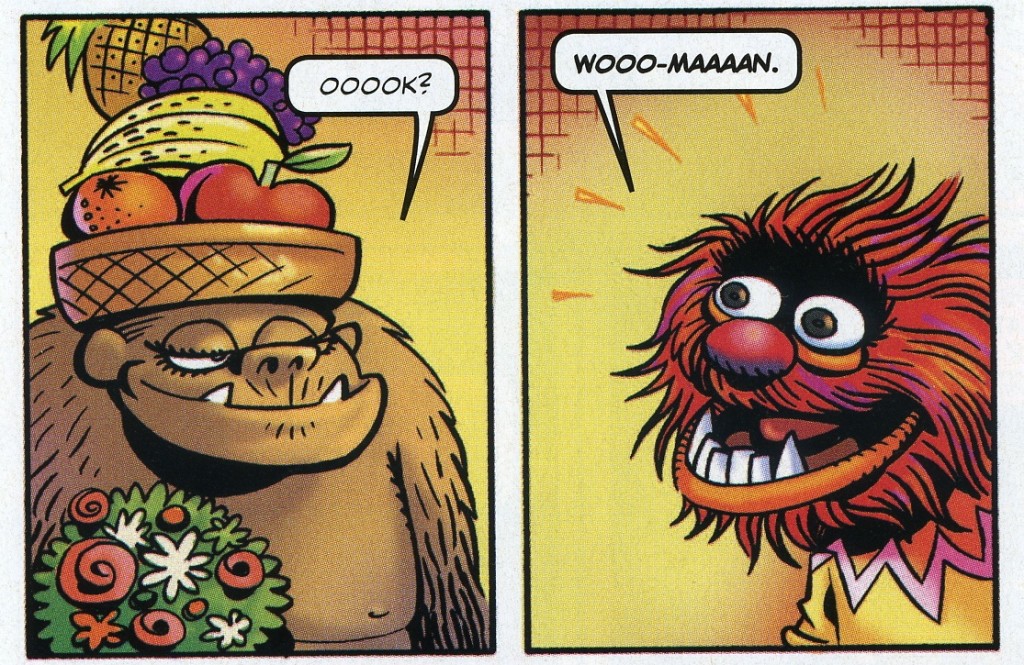 So the good news is: There’s a new Muppet Show comic book, and it’s good, and there are three more issues to go.  I hate to even mention the bad news, but I guess I might as well ruin your day: After “The Four Seasons” arc, there are still no plans to produce any new Muppet comics.  So hey, let’s all buy 80 copies of this one so Marvel sees that the readers want more.  It’s for a good cause! 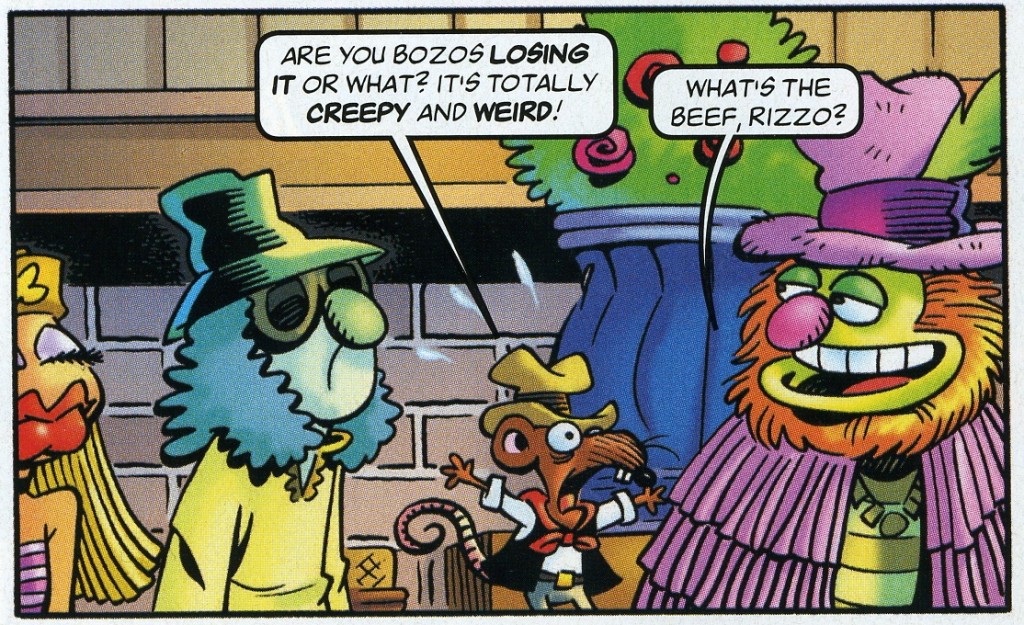 One final note: During one backstage scene, Rizzo appears in a cowboy costume.  There’s no explanation for this, and he’s not seen wearing the costume in any number onstage.  I’ve decided that Rizzo must had a role in a cowboy sketch that we, the readers, didn’t get to see, because while he and his fellow rat cowboys were onstage, we were watching the backstage action instead. It makes sense, doesn’t it? 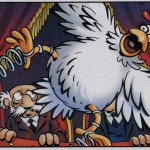 Click here to woo a gorilla on the Tough Pigs forum!