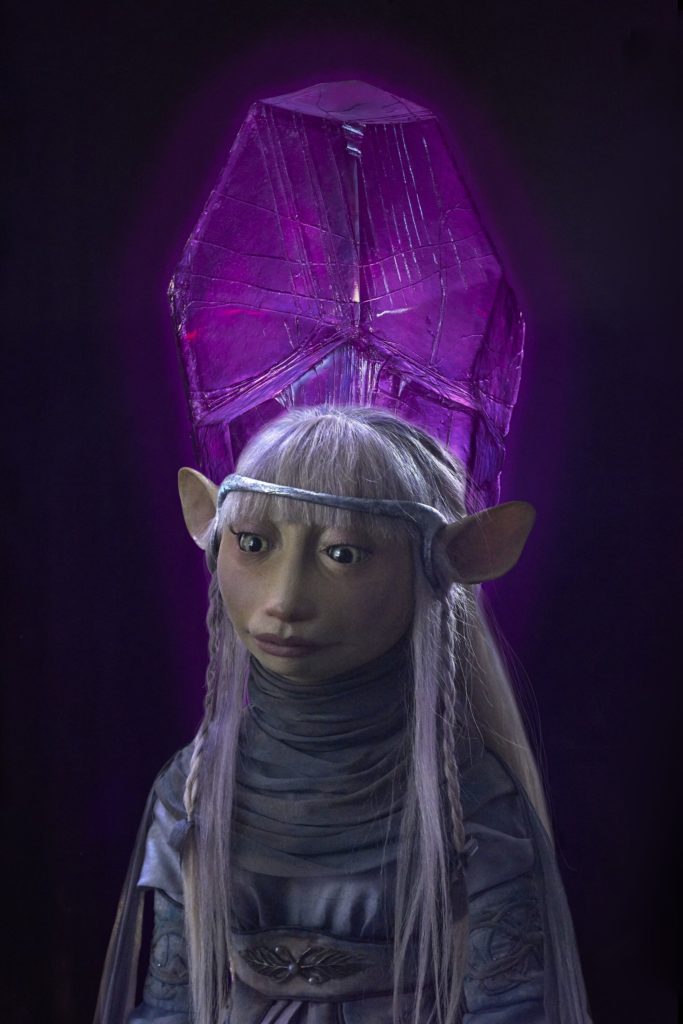 Look, a whole lot of things happen in every episode of The Dark Crystal: Age of Resistance, and these two are no exception. Rian, Brea, and Deet finally all meet up. Aughra does an amazing dance in the Dreamspace. Deet heroically returns Hup’s spoon after he forsakes it. I could spend an entire article just listing all of the delightful things that happen in these two episodes.

Instead, I want to focus on something more specific. Let’s highlight the arc of one character in these two episodes – Princess Seladon.

Episode 5: “She Knows All the Secrets”

When we were first introduced to Seladon back in the pilot, she seemed like a typical “responsible oldest child” character. Brea was the key princess, while Seladon and Tavra were just background figures to help flesh out the world. We had no reason to assume that she would ever develop into more than that. We didn’t mention her name at all in our reviews of the first four episodes, because she didn’t seem important.

Indeed, she still seems like a kid when we first see her in episode 5. She has a heart-to-heart with her mother, the All-Maudra, about the heavy responsibility that comes with wearing the crown. Her mother assures her that she’ll understand when she’s All-Maudra. In the moment, this seems like simply a sweet gesture from a loving mother, but it’s actually laying the groundwork for the episode’s shocking ending.

This is where we start to see who Seladon truly is. Rational characters accept the crisis affecting their world and move to stop it. We see that happen not just with our heroes, but with Aughra, the All-Maudra, Gurjin, Naia, and others. All of them know that if all evidence points to “the Skeksis are evil and Thra is dying,” they need to stop it.

But Seladon can’t accept that. Her worldview only makes sense if the Skeksis are benevolent and Thra is thriving. She blocks out any information that says otherwise. Anyone who tells her otherwise is a liar and a traitor. She tells the Skeksis about the brewing revolt because she needs to Skeksis to be the good guys. If they aren’t, her entire life has been meaningless. 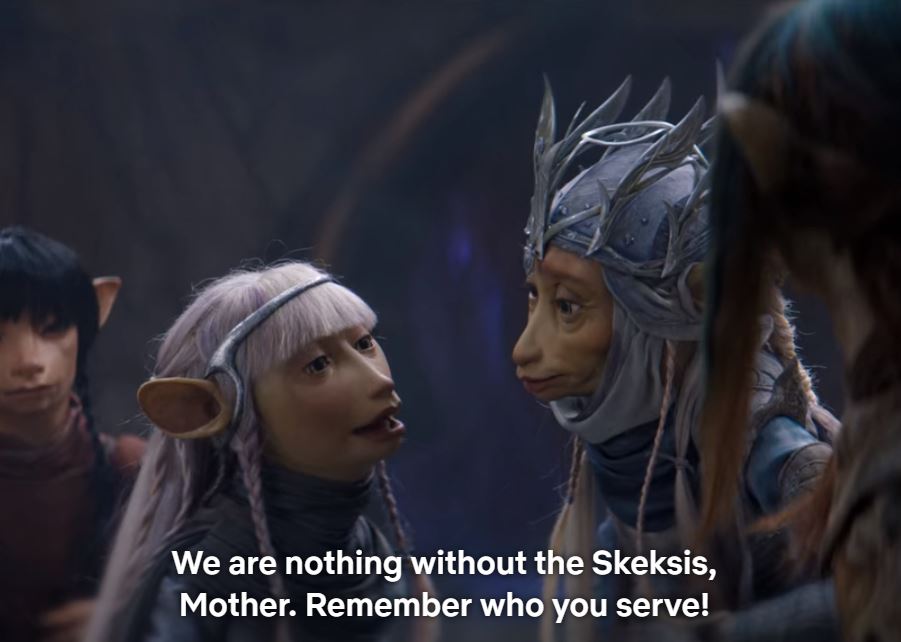 So she tells the Skeksis, and they kill the All-Maudra to stop her from spreading the truth. We the audience know that is absolutely Seladon’s fault. If she hadn’t told the Skeksis, they would never have known. But she immediately declares that it’s Brea’s fault, because Brea rocked the boat and ruined Seladon’s idyllic royal life.

This is the kind of blame-shifting that happens in real life all the time. People in power refuse to accept the truth that people are suffering, or that bad things are happening, or that they have the ability to make things better. Instead, they twist reality to suit their agenda. The only truth is the truth that allows the powerful to sleep at night. In a show rife with parallels to our world, Seladon might be the most realistic.

Over and over, people try to bring Seladon to her senses. Her actions don’t benefit Thra, and everyone but her can see that. Aughra brings her to the Dreamspace along with all of the other characters, so they can see what lies ahead. She calls Aughra “a power-hungry witch”, and consequently Seladon is the first one that Aughra sends back.

In episode 6, Maudra Fara speaks fondly of the deceased All-Maudra, saying that she “wielded truth” and citing her murder by the General as evidence that the Skeksis are, in fact, evil. Shocked that Seladon considers her mother a traitor, Fara challenges Seladon for the crown. Procedure dictates that the winner of their battle will be the new All-Maudra. Seladon instead declares herself to be the All-Maudra by decree of the Skeksis, strutting to the throne in an all-black Skeksis-inspired gown.

In that moment, we see how far gone Seladon has become. She speaks of loyalty and of doing what’s best for Thra, but she does this by casually disregarding tradition. The other Maudras are wiser and more experienced than she is, but she doesn’t respect them because they aren’t saying what she wants to hear.

As the episode ends, one of the other Maudras insists that Seladon’s vicious takeover of the government “isn’t the Gelfling way.” She coldly replies “It is now” and then the credits roll. In just two episodes, Seladon has successfully gone from “frightened child” to “scheming dictator.” We could barely remember her name, and now she feels like the primary antagonist of the series. 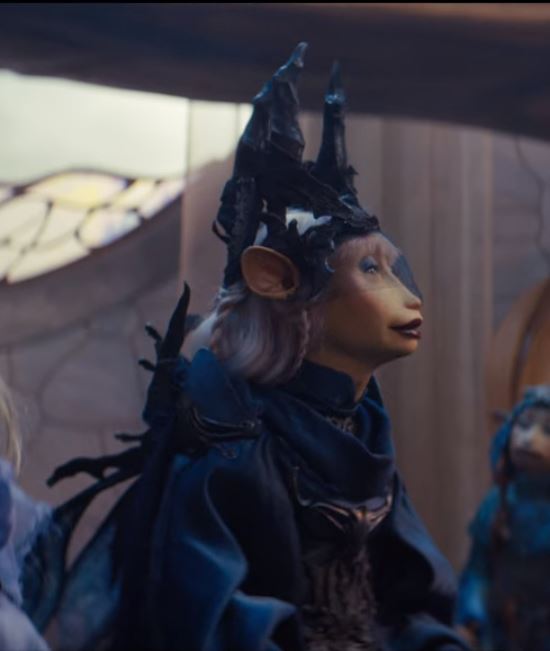 It’s staggering how natural that transformation feels. The writers (Kari Drake and showrunners Jeffrey Addiss & Will Matthews) ensure that we see every single step of that process. We don’t agree with Seladon about any of her decisions, and we know that she’s wrong about absolutely everything. But we understand what she’s thinking and why she feels the way she does.

This is also due to the powerhouse performances of puppeteer Helena Smee and voice actor Gugu Mbatha-Raw. Mbatha-Raw has to play a wide variety of tones, from despair as she burns the All-Maudra to chilly confidence at the council of Maudras. She conveys so much emotion in every single scene, and makes a potentially off-putting character into one who’s almost sympathetic. 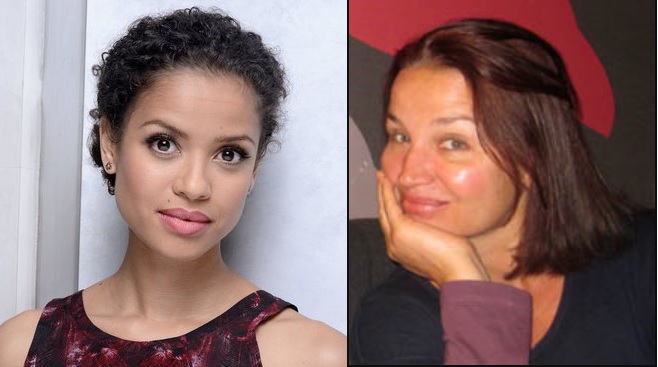 Smee also does wonders with the physical performance. Much has been written about the physical limitations of the Gelfling puppets, with their stiff mouths and limited expressions. Smee takes those limitations and turns them into an asset. Seladon is someone who has been reserved all of her life, but she can’t contain her emotions anymore. We see the fear, the disgust, the anguish on her face throughout these episodes, and she looks like she’s trying to keep a stiff upper lip through it all. It’s a brilliant performance that seems more nuanced with repeat viewings.

Like I said at the top, a lot of things happen in these episodes. Seladon is just one of the many characters who get this level of detail and attention from the cast and crew. But her rise is a definite mark of the show’s high quality. They’re treating everything with care, and the final product is remarkable because of it.

Click here to talk about how amazing the Dreamstitch is on the Tough Pigs forum!