Paul Williams’ work on The Muppet Movie is arguably his biggest, most iconic contribution to Muppet history.  I mean, he wrote “Rainbow Connection”!  “Movin’ Right Along”! “I’m Going to Go Back There Someday”!  I defy you to read this article without humming along to at least a few of those.

We’re continuing our interview with Paul Williams by poring through his work on the Muppets’ first theatrical film, and then we’ll finish up later this week with a conversation about Muppet Christmas Carol, Letters to Santa, and more! 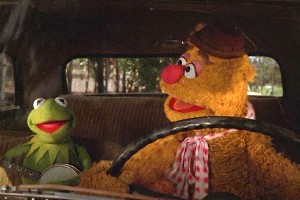 ToughPigs: Do you remember the first song you wrote for The Muppet Movie?

Paul Williams: I don’t, let me think.  I think “Rainbow Connection” was the last song we wrote, which is not uncommon for us.  “Movin’ Right Along” might’ve been the first one.

TP: Did you know at the time that you’d be writing Kermit’s most iconic signature song?

PW: When was “Bein’ Green”?  Joe Raposo, to me, had locked that up.  Joe had written this amazing song, and I was a huge fan, and he was the nicest guy.  But what happened was when we started to write “Rainbow Connection”, “When You Wish Upon a Star” was our model, you know that amazing scene in Pinocchio when Jiminy Cricket climbs up into the window and looks out there and sings “When You Wish Upon a Star”, it’s just brilliant.  So we wanted something that would really show that Kermit’s every-frog.  Kermit’s Jimmy Stewart in It’s a Wonderful Life, is the way I’d describe it.  And he deserved a song that would really show that inner light, but would also show his spiritual life and also his humanness.

The amazing thing about the song is that it’s a song about questions instead of answers.  Kenny and I met up at my house and Jim Henson, Jerry Juhl, Frank Oz, myself and Kenny, and I think David Lazer, we talked about what the movie would basically be, and Jim said he wanted it to be a road picture, about how the Muppets got together.  We start out with Kermit sitting in the swamp, on a lily pad, which turned out to be a log because it was easier to hide Jim in a log.  Jerry Juhl had already come up with the idea that an agent is coming along looking for frogs who want to become rich and famous in Hollywood.  He just laid it out, where he’d meet Rowlf, where he’d meet Fozzie.  We looked at this and said, well what has he got?  He’s got water, he’s got air, he’s got light.  You have refraction, you have rainbows.  So the first line came immediately. (sings)

Why are there so many songs about rainbows and what’s on the other side?

And then we wrote ourselves into a corner.

Rainbows are visions but only illusions, and rainbows have nothing to hide

Well, now we’ve done it, we’re talking about rainbows. We’re denying their mystical… whatever.  But the next like has Kermit, essentially, like a member of the audience.

So we’ve been told and some choose to believe it
I know they’re wrong wait and see
Someday we’ll find it, the Rainbow Connection
The lovers, the dreamers, and me.

I think what’s brilliant about it is… well, “brilliant” is not the word I should use…

TP: We can use the word “brilliant”.

PW: I think what works about it is that he immediately includes the audience.  I don’t have the answer, but the question is here.  My favorite line of the song is (sings)

Who said that every wish would be heard and answered
When wished on the morning star?
Somebody thought of that and someone believed it
Look what it’s done so far 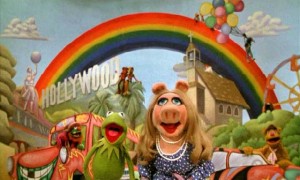 It totally empowers the audience, it empowers us as people.  It’s very new age.  What you dwell on, you create.  “Somebody thought of that and someone believed it, look what it’s done so far.”  Which ties in to the ending, in “The Magic Store”.  Instead of just a straight reprise of “Rainbow Connection”, why not, (sings) “Life’s like a movie, write your own ending.  Keep believing, keep pretending.”  Again, it’s empowering the audience, that we have the capacity to be really special.  I think that’s why the song is so loved.  I think the subliminal message of the song is that you’re special and you can do all the things that we’ve done.  I think that was Jim’s message.  I think Jim’s message was not that I’m special, but that you’re special.

TP: I think that came across.  That’s what I took from it.

PW: Did you?  That’s wonderful.

TP: One thing I always wondered: “Never Before, Never Again”, was that written for Miss Piggy or was it written for Johnny Mathis?

PW: Sinatra.  Think about the phrasing.  (sings) “Never before have two souls joined so freely and so fast. For me this is the first time and the last”.  I mean, it’s written for Frank.

TP: Did Jim want to try to get Frank Sinatra?

PW: I don’t remember why it didn’t work with Frank.  I don’t know if Frank was unavailable.  I think that when he couldn’t do it – I don’t think he wouldn’t do it, it was that he couldn’t do it – I approached Johnny Mathis, who recorded it.  Johnny just sang it so beautifully.  Then Frank [Oz] said, “Y’know what? Piggy should sing it.”  And I think that he was right in the sense that, for the film, I don’t know if kids would sit still…

The other thing that’s key for Jim is that we never wrote down to the audience.  We never wrote for kids, we wrote for the kid in everybody and from the kid in everybody.  But he never ever expected us to write down.  He had faith in the perceptive abilities of his audience.  So he’d allow something like “I Want to Go Back There Someday” or a song like “I Hope that Something Better Comes Along”, which is pretty clever for a young audience.  “A skunk was badgered, the results were strong” is nail-on-the-head.

TP: There was stuff I didn’t understand in that song until I got older.

TP: How much instruction did you get?  Like, the script would say, “Kermit and Rowlf sing a song about women”?

PW: No it’s like, Kermit’s been left, Piggy’s gone, and it’s the perfect place for a classic blues number.  And we wanted to do it with all animal references.

TP: Was that your choice or was that Jim’s choice?

PW: Our choice.  We didn’t get song instruction from Jim.

TP: And you wrote “Can You Picture That”.  Were you thinking back to “Riverbottom Nightmare Band”, trying to get back that rock feeling?

PW: My model for that group was a great band in the late ’60s called Delaney & Bonnie and Friends.  Their first album is called “Accept No Substitute”, you have to hear that.  Great gospel, Leon Russell on piano, Eric Clapton was with them for a period on the later albums, but it was just brilliant gospel rock and roll.  And that was the model I wanted.  That and a kind of Dr. John.  Kenny and I had a ball there.  (sings) “Aurora borealis shinin’ down on Dallas, can you picture that?”  And again, the empowerment.  What you picture, you create.  The thing they did with paining the Studebaker and the sign?  That’s brilliant.  That to me is the payoff to “Can You Picture That”.

TP: You’re also credited for “Animal, Come Back Animal”, the instrumental.  Did you and Kenny collaborate on that too? 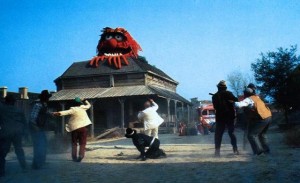 PW: I’m trying to remember… was that (hums the music during the “giant Animal” scene) “Dun dun daa, da da dun dun daa…”? No, I wrote that alone.  Kenny would’ve been the natural to score the film.  I scored Bugsy Malone, I scored The End for Burt Reynolds in ’77.  So I’ve had some experience scoring.  Kenny and I were in Toronto performing, we had a cut of the movie, we spotted the movie with Jim and the music editor… and then Kenny’s wife went into labor, he was having his first child.  He said, “I can’t do this, all I can think about is my wife”.  I said I’ll do it, so I sat there and wrote, (hums the riff from the movie’s intro, as Statler and Waldorf drive up to World Wide Studios) “Boom boom-boom, boom boom-boom-boom-boom boom…” One of my favorite cues in the film, I wanted to do a very Jerome Moross kind of thing for the western scene.  (hums the music cue as Doc Hopper and his henchmen run away) “Bum bum, bum bum-bum, bum bum bum bum-bum…” I can remember those cues!

PW: I love that.  I love that big country music.  Is that on the album?

TP: Yeah, that and the instrumental versions of “Never Before, Never Again” and “I Hope that Something Better Comes Along”.

PW: The instrumental version of “Never Before, Never Again” was so beautifully arranged by Ian Freebairn-Smith.  It was behind the scene with Steve Martin.  It was too pretty to not let everybody hear it, with Kenny’s gorgeous melody.

TP: And you appear in the movie as well.  Was there any discussion early on, or were you just on set…? 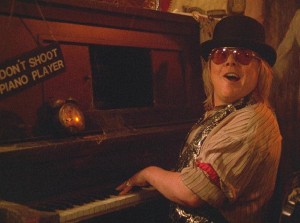 PW: No, it was early on.  Just, come and play the piano player.  Porky McWilliams. (laughs)

TP: After The Muppet Movie, was there any talk of you returning for the next movie?

PW: No, I don’t remember if they asked me.  I had done Emmet, I had done The Muppet Movie, I think it was time to let somebody else take a shot.  It was entering into the ’80s and I was beginning to drink.  By the time I did Muppet Christmas Carol, I was sober.  Muppet Christmas Carol was the first thing I ever did after I got sober.  It was a really interesting challenge to all of the sudden sit down and write the words and music to that without that little confidence builder.  By the end of the ’80s, I was having a glass of vodka when I got in the shower in the morning.  I’m an alcoholic, hardcore.  When the early ’80s rolled around, right after The Muppet Movie, I wanted to direct, I wanted to write a screenplay, things like that that never got off the ground.  I wanted to do The Wizard of Id as a feature.  I went up to Endicott, New York and stayed with Johnny Hart, who became a really good friend, and actually made a deal with Columbia Pictures to do Wizard of Id as a feature.  I was going to play the king.  Then that whole David Begelman thing happened and it all fell apart.

TP: Were you aware that Jim worked on a Wizard of Id pilot back in the ’60?

PW: I was not aware of that.

PW: Well, I should talk to them about it, because it’s still a real labor of love…  So then I went off and did Ishtar, and you know how well received that was.

TP: Were there any other projects in development that you never got off the ground with the Muppets?

PW: After I did Letters to Santa, I met with [The Muppets’ VP of Talent Relations] Kevin Frawley to talk about a Halloween special, and they kind of looked at each other like, “Hmmm…” because what I came up with was basically the same as The Muppets.

TP: We’d actually heard rumors about the Halloween special and why it got killed.

PW: It was that they’d go back to save the theater because an oil baron wants to, you know… 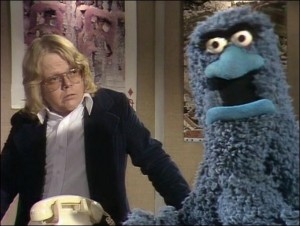 Tune in later this week for the epic conclusion of our interview with Paul Williams, in which Paul expounds on his work on Muppet Christmas Carol, Letters to Santa, and more!

Click here to refrain from shooting the piano player on the ToughPigs forum!