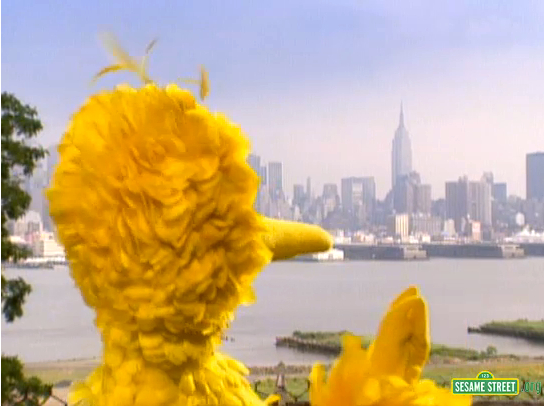 Since the earliest days of television, New York City has been the setting for some of the most memorable shows in history. Who wouldn’t love a city that claimed home to Ralph and Norton, Lucy and Ricky, Jerry, George, Elaine, and Kramer, and Joey, Phoebe, Ross, Rachel, Chandler, and Monica? From the gritty realism of NYPD Blue to the cosmopolitan glamor of Sex and the City, each show has had their interpretation of what New York City was like. Some strove to be lifelike, other had a stylized approach. But if you asked me, a native New Yorker, what show best captured the city I love, I’d answer that the ultimate New York show would have to be Sesame Street. I’m not just saying that because I love all things Jim Henson (or because…you know, I write here). I think that Sesame Street has managed to capture the heart of the city over its almost 48 years of existence on television, and here are a few reasons why: 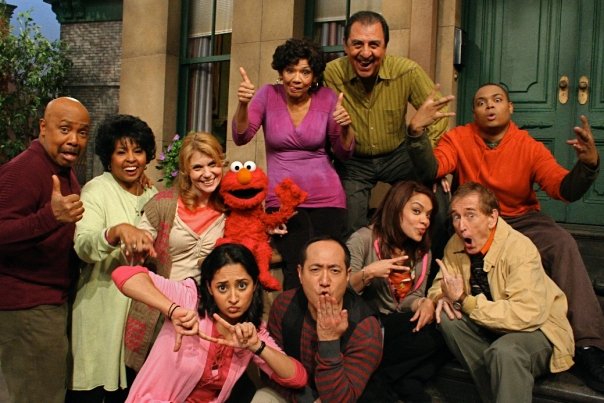 Sesame Street, at its inception, had a goal of showing inner-city children an environment that reflected theirs. And in New York, a big part of that environment is diversity. For century, the city has been a melting pot of native-born New Yorkers, immigrants from around the world, and transplants from across the country. Rooted in the social activism of the 1960’s, the aim was to show that people of different races and creeds could live together in a united community. Naturally, from the get-go, the show delivered on that promise, with Bob, Gordon, Susan, and Mr. Hooper making up the human adults in the ensemble, and the children proved to be even more diverse. And then, of course, there were the Muppets. If that wasn’t enough diversity, they went and threw monsters, grouches, and an eight-foot tall bird. And what makes it all work is that it’s played completely straight. Nobody is surprised by the existence of each other. The sense of whimsy is a quiet one. In New York, you can easily walk from Little Italy to Chinatown to the Bowery, and it’s all seamless. The difference in demographics is quite evident, but there’s very little dividing it all. New York is home to all kinds, and Sesame Street reflects that. 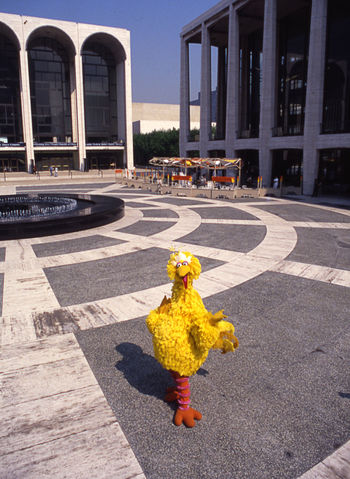 Sesame Street has never been afraid to show off its New York setting. From Lincoln Center to The Metropolitan Museum of Art to Central Park, the show has shown off the highlights of the city to viewers. Gordon and Snuffy ran the New York City Marathon! Murray did science experiments at PS 138 in Brooklyn and at the New York Hall of Science in Queens! Elmo hosted Elmopalooza from Radio City Music Hall! There’s even a whole song dedicated to that venerable New York institution, the subway system. For fifteen years, from 1992 to 2007, the Statue of Liberty could be seen in the show’s closing credits. Sesame Street has brought the best of the Big Apple to viewers across the country. (Even the pizza! Now, it’s never been officially specified, but c’mon, it’s New York pizza.) 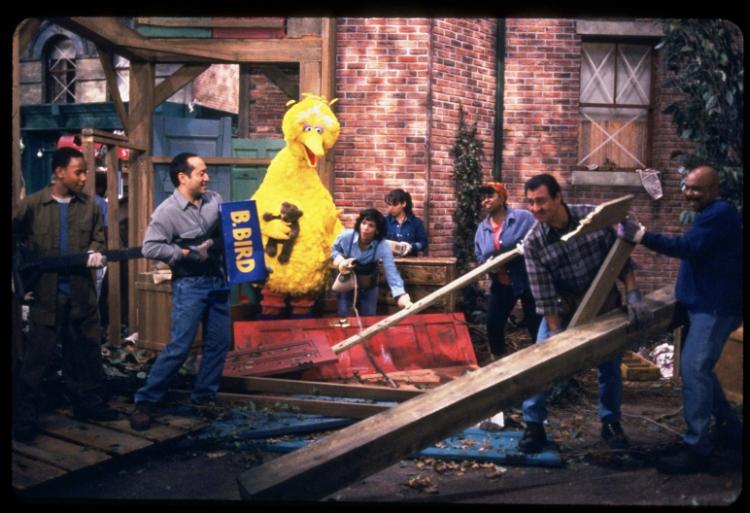 When New York’s sports teams are champions, odds are soon enough, you might see a player or two show up on Sesame Street. Months after winning the NBA Championship, legendary New York Knicks player Walt Frazier appeared in the show’s second season. When the New York Mets were on a hot streak in the late 1980’s, having won the World Series in 1986 and the National League East in 1988, Mets players Ron Darling, Keith Hernandez, and Mookie Wilson showed up to help teach Count von Count and Snuffy how to play baseball. Fresh off their Super Bowl XXI victory in 1987, New York Giants players Carl Banks, Mark Ingram, Sean Landeta and Karl Nelson appeared in the following year’s Sesame Street, Special. But in times of tragedy, Sesame Street has been there, too. After the tragic 9/11 attacks, children were just as shocked, confused, and angry as adults. And so, in the upcoming season, the writers conceived a quartet of episodes to try and help kids come to grips with some pretty serious stuff. A fire at Hooper’s Store paralyzed Elmo with fear, and so the firefighters showed Elmo that they would do as much as they could to make everything okay. Big Bird taught his visiting pen pal that even though his friends look and think different than him, they were still good people and worth including in their fun. In a later episode, Big Bird comes to grips with losing his turtle friend (don’t worry, the turtle was fine), who arrives on Sesame Street as quickly as he leaves. Telly learns how to handle a bullying cousin who steals his triangles. These subjects aren’t out of the ordinary for the show to tackle, but it was a clear message that these feelings of fear, sadness, and anger could be addressed and managed, and in time, things would be okay. Sesame Street, in those instances and more, reflected the resiliency of New York. 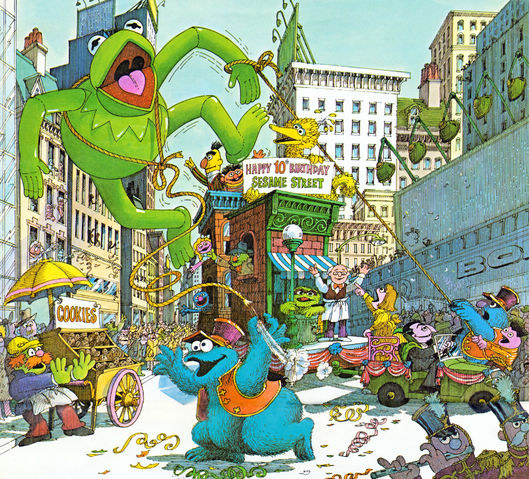 Sesame Street has always been a source of civic pride in New York. While many shows are set in New York City, few of them are actually filmed there. And not only has the show showed off its home city with pride, they’ve taken time to be a good neighbor in The Big Apple. Sesame characters have appeared in events across the city. When the local government decided to establish the New York City Family Ambassadors Program in 2009, there was only one set of characters that would do for the inaugural year, and Elmo, Big Bird, Cookie Monster and the like showed off their favorite places to visit for tourists and locals. The Sesame Street Muppets and humans have been a staple of NYC’s Macy’s Thanksgiving Day Parade since 1974. When the show decided to have an exhibit to celebrate its 40th and 45th anniversaries, it could’ve gone anywhere and they would’ve made an easy buck (and that’s just on me alone). But where did they put those exhibits and the events that followed? In New York’s public libraries, where they could be seen by everyone, absolutely free. They’ve made appearances on behalf of nonprofits like UNICEF, NYCGreen, the New Victory Theater, and of course, PBS and Sesame Workshop. Few shows with a major cultural impact film in New York, and fewer still have given back on such a massive level as Sesame Street.

Perhaps the reason that I find the most compelling is that Sesame Street presents the city in its most idealized form. Sure, New Yorkers have the same share of problems as anyone else does, and not everything can be dealt with in a song and a cartoon voiced by Andrea Martin. And sure, some New Yorkers can be grouchier than Oscar on his worst day. But when it comes down to it, the city can proudly stand together when we need to. New York welcomes people from around the world. No matter who you are or what you believe, there’s a neighborhood for you. There’s a place for you, if you have the patience to find it. And regardless of where you came from, once you’re here, you’re a New Yorker. No matter what happens, that’s always a label of honor. And that’s what Sesame Street is really all about: loving everyone and accepting them as they are. Appreciating the world around you. (And letters and numbers and stuff, but you know what I mean.) And knowing that we’re all in this together. That’s what New York is at its best. So you can head to Central Perk or Monk’s Café, but if you want to get to the heart of New York City, head straight to the happiest street in the world. (As soon as they tell us how to get there.) 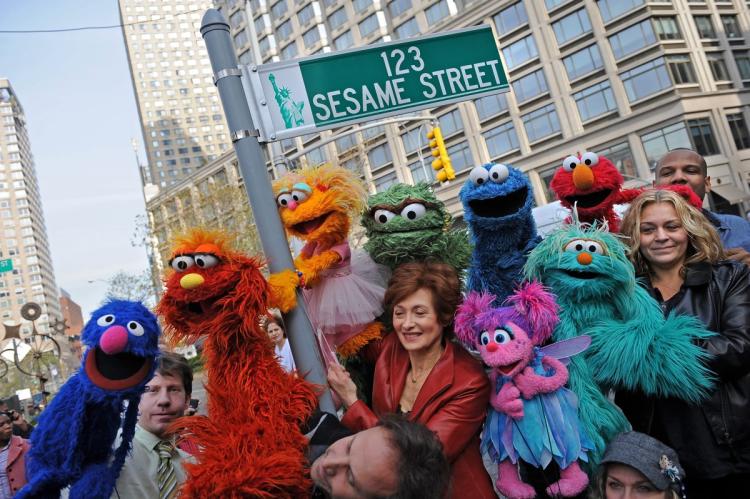 Click here to give our regards to Broadway on the ToughPigs forum!

NYC Week: What the Heck is Manhattan Melodies??