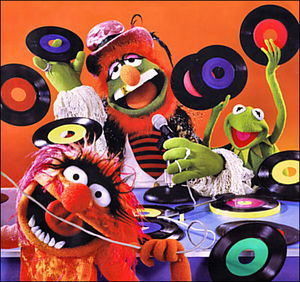 Music has undeniably always been at the heart of the Muppets. It’s also been the lifeblood of the spirit of New York City since the city’s inception. Thus, in honor of NYC’s Museum of the Moving Image’s Henson Exhibit finally opening (and yay to that! I’ve feel like I’ve been waiting for years!), I’ve assembled a killer playlist of NYC/Muppet songs to rock out to in which the combined awesomeness of The Muppets and The Big Apple might blow your eardrums clean off. Get ready to crank up the volume and enjoy these choice Muppet/NYC tracks:

We’re starting with a dope version of NYC punk/power-pop combo Blondie’s iconic 1980 classic “Call Me” as performed by Debbie Harry herself. This track, produced by genius disco-producer Giorgio Morder, gets the real Muppet treatment here. I actually think the synth solo in this is weirder and more interesting than what Blondie themselves did with it, and the song is played by an incredible slew of punk-rock Muppets who look like they stepped right out of CBGB’s and onto the stage.

This manic song really captures the intense experience that riding the subway is every day for millions of New Yorkers. I’m genuinely sad for Kermit that his stop gets skipped in this song – it’s a stress that I know all too well. I hope Kermit did his daily meditation or took some yoga to get through what’s a difficult aspect of living in this wonderful city.

Another great way to blow off some stress is to go out dancing to some hip music, something that New Yorkers have always been great at. NYC was the birthplace of the Disco movement of the 70s, and many of the musicians who contributed to the music of Sesame Street (including future disco legend Nile Rogers) were affiliated with Disco. The two Sesame disco albums: “Sesame Street Disco” and “Sesame Fever” are an incredible time-capsule for that particular period in NYC’s rich musical history.

The absolute best thing to being a New Yorker is that there are people from all around the world jammed up against you every single moment of every single day. This charming salsa themed track was written by NYC golden-boy and almost-EGOT Lin Manuel Miranda before Hamilton took this town by storm. He can also be heard here singing as a character named Lamb Manuel. Ten points for being clever, Sesame Street!

You didn’t think I would dare leave The Muppets Take Manhattan out of this list, did you? Not only was this film set and shot almost entirely in NYC and the surrounding area, the plot is also so, so emblematic of young artist’s struggles trying to make it in “The Big City.” Although the entire soundtrack is exceptional (a Broadway composer pal of mine texted me out of the blue the other day with “Do you think The Muppets Take Manhattan is the best musical of the 80’s? Because I do”) this is the song that most embodies the “fake it ‘till you make it” attitude archetypical of those wonderful New York theater people.

Move over Madonna and Cyndi Lauper, here comes Maria and Gina! You can’t take no for an answer, but the word is “No!” Although this song is admittedly not emblematic of any particular NYC musical style, this video is a wonderful showcase for shots of the down-and-dirty NYC of yesteryear, before Mayor Giuliani Disney-fied the city almost beyond recognition.

Farley – Forty Blocks from My Home (from Sesame Street, 1989)

The wonderfully bluesy “Forty Blocks From My Home” deals with another aspect of growing up in NYC: riding the school bus a long way from your neighborhood to get to your school. This kid (the seldom-seen Sesame Street character Farley) must be going out of district, right? Maybe to a specialized public elementary school? Wonderful shots of NYC abound in this video, and at the end, Farley is starting his school day at “P.S. 40,” an NYC school if there ever was one.

Kermit The Frog – Once In a Lifetime (from Muppets Tonight, 1996)

Co-existing at the same time as Blondie at CBGB’s were the wonderfully inventive and always groovin’ Talking Heads (who also happen to be my personal favorite band). They took the Punk and New Wave scene by storm in the 70s and 80s and were emblematic of the ability of NYC-based musicians to draw influence from musical styles from around the world and synthesize them into something excitingly new. There is nothing more thrilling than watching Talking Heads at their peak in the Jonathan Demme-directed film Stop Making Sense. Well, maybe the only thing more thrilling is seeing Kermit the Frog cover the song, in David Byrne’s big suit no less.

You can’t have a list about NYC music without mentioning Hip Hop: a created-in-NYC musical genre that flows through the lifeblood of this city like no other. Unfortunately, there is a lack of examples of NYC Hip Hop artists working with The Muppets (what I wouldn’t give to see Run DMC as guest stars on either The Muppet Show or Sesame Street, can you imagine what a perfect combo that would be?) so we have to settle for this wonderful track from Atlanta-based group Arrested Development. This song is about being proud of who you are, another NYC value that can be felt living in the greatest city in the world.

Olivia – Filling The Air With Love (from the Sesame Street album Love, 1980)

It might be a head-scratcher to many why I’d end my list with this tune from the 1980 Sesame Street album Love, but to me, it makes perfect sense. Beautifully sung by the powerhouse Alaina Reed Hall as her character from the show, Olivia Robinson, this song is about shedding your insecurities and performing in front of thousands of people. One can imagine Olivia singing this song in front of thousands on stage in a Broadway theater. As an NYC performer, I can very much identify with this gentle anthem about bringing joy into the world through your art: an ethos that both The Muppets and the denizens of NYC have always embodied perfectly. 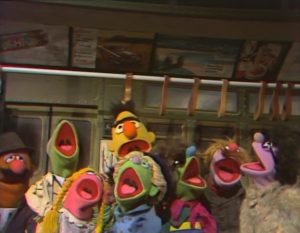 Click here to take the Punk and New Wave scene by storm on the Tough Pigs forum!