NYC Week: What the Heck is Manhattan Melodies?? 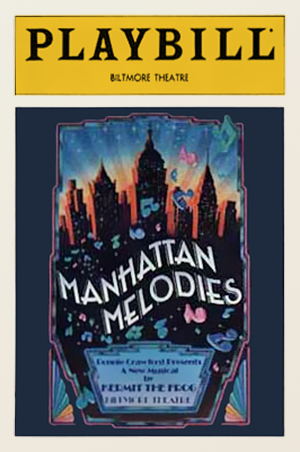 Have you ever seen The Muppets Take Manhattan? That’s a darn good movie, right? I like it, too. But there’s something that’s always bothered me about it. So I wanted to take a quick moment and talk about something that’s been bugging me for years – What the heck is Manhattan Melodies, anyway??

Here’s what I know it is. It’s a Broadway musical, right? And it’s got singing and dancing and no shootings. And it’s got a great opening number, “Right Where I Belong.” That much I get. And it’s about a boy (Kermit) and a girl (Miss Piggy) getting married in the big city. That’s all well and good. But… is that all it’s about?

Let me step back a moment because I’m getting confused again. When Kermit and the gang are in college, just about ready to graduate Danhurst College, they put on the senior variety show, which they call Manhattan Melodies. So the play they perform is the whole show, right? Because no one mentions anything else being performed, no other acts are mentioned, and it’s the only thing listed on the marquee outside the school. That’s not much variety in a variety show. The movie opens with the song “Together Again,” but since it’s the end of the show-within-a-movie, that’s really the play’s closing number. So we’ll save that part for later. 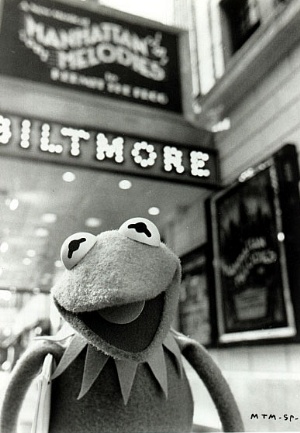 After encouragement from his fellow students, Kermit and friends decide to move to New York City, and following a large series of mishaps – almost a whole movie’s worth! – they find a producer who believes in them and gives their show a chance. (Glossing over the movie entirely is important here, trust me.) They have a few weeks until they open, it’s a brand-new play, and somehow they’ve booked the legendary Biltmore Theatre to host it. I guess that whispering campaign really did work.

Okay, I think I’m starting to get a handle on what the play is. But then the montage happens, where Kermit has amnesia and the gang is still putting everything together with the staging and costumes and the tech rehearsals, and I can’t help but wonder – Who is Kermit’s understudy? They don’t make any mention of what they’re doing about the writer and star of the play not being there for rehearsals. Is Scooter finally stepping into the spotlight? Will Fozzie be donning some ping-pong balls on his furry head? Will they be traveling to a Siberian gulag to find a suitable replacement? No word is given. Which I guess is fine – they’re still all gung-ho about the play and the “Show Must Go On!” spirit of the Muppet is intact. Just seems like a big deal that they could’ve addressed. But keeping that aside, with Kermit gone for as long as he was, and this being a big show on Broadway with producers giving notes, doesn’t it seem likely that the show would’ve gone through a list of changes? How did Kermit learn where all his marks are and which songs were added or cut in previews just seconds after getting over his amnesia? That frog just might make it in show biz after all!

So Kermit gets his memories back, and he’s about to go on stage, and Fozzie asks if their friends can watch the play. In an uncharacteristically mean move, Kermit says “No!” –  because they should be IN the play! He invites a bunch of frogs and dogs and bears and pigs and chickens and things to be in a play they’ve never read, to sing songs they’ve never heard, do dance moves they’ve never rehearsed, and this will make things better? Somehow? Because… I don’t know, friendship? This seems a little like it’s going off the rails now. 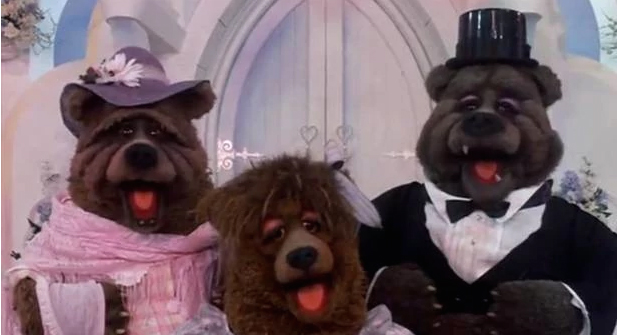 But somehow, by the saving grace of movie magic, it works! And it’s a wonderful play that lasts almost a whole nine minutes! As promised, the opening number is a show-stopper. But the bigger show-stopper comes after the next song, “Somebody’s Getting Married,” when the show literally stops. A family of bears open the door to the wedding chapel, a bright light flashes, and then…. I don’t know how to explain this part. We’re now inside a chapel with four walls and no vantage points for the audience to watch. The theatre-going audience is now theatre-gone. There are no crowd reactions so we can’t even assume the audience is watching on a video monitor or anything of the like. As a movie, it’s a very beautiful scene. But as a play… Hubba wha? Two songs, no conclusion, and a complete alienation of the viewing public. Is that what passes for a smash hit on Broadway? They don’t even get to hear the famous closing number, “Together Again!” I’d be asking for my money back.

For a moment, I thought perhaps the entire wedding scene was just a kidnapping plot by Miss Piggy in order to coerce Kermit into marrying her. But then why does Kermit ask her why Gonzo isn’t playing the priest? That means he knows the scene well and it had always been the plan to block off the audience. But why?

I guess this will remain one of life’s great mysteries. Who was Jack the Ripper? Where is D.B. Cooper? Why did the Muppets purposefully stage a play to obstruct the view from the audience? Hopefully one day this enigma can be solved. I mean, hey, if we can track down Amelia Earhart, anything is possible! 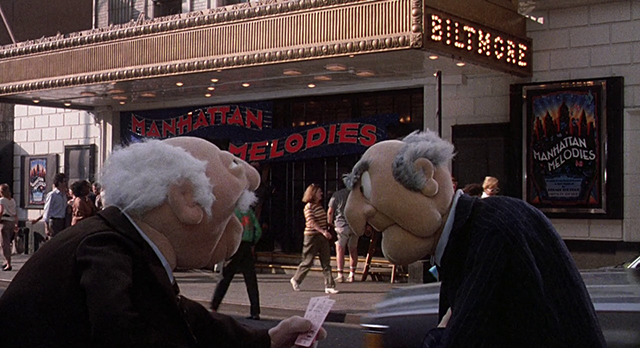 Click here to invite some bears to your wedding on the ToughPigs forum!