It’s we said a fond farewell to 2010, because New Year’s Day is upon us and 2011 is right around the corner. As we ring in the new year, aren’t you curious as to what some of the folks who work with the Muppets and in Muppet fandom have in mind for their New Year’s Resolutions??

We asked the same question last year, and you can see those resolutions right here.

And let’s ring in the New Year with the help of some of our most Muppetational friends! 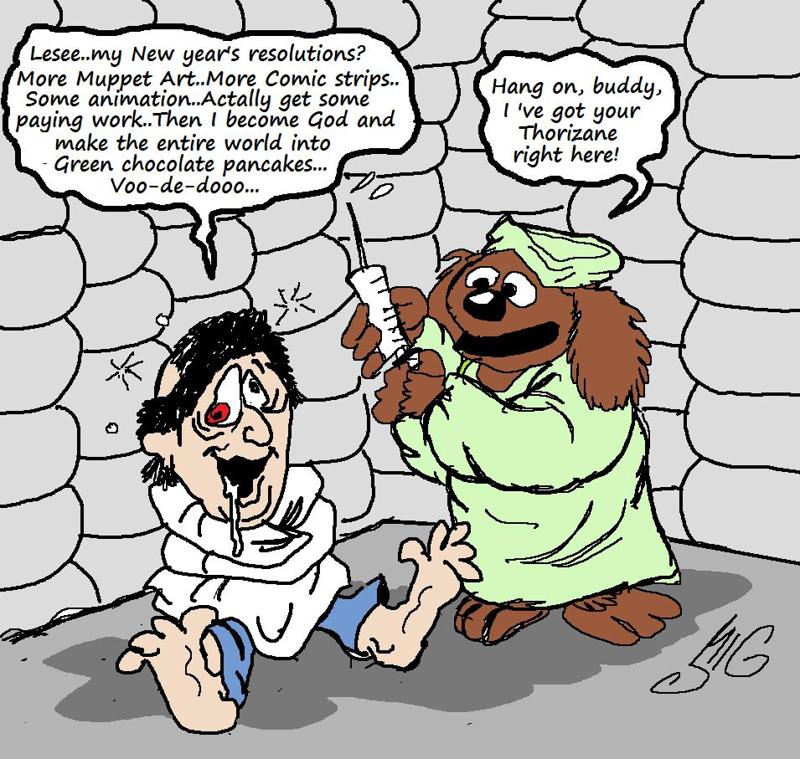 Terry Angus, Muppeteer/Builder:I think I keep promising this every year and I always end up failing on this but yet again my resolution is to cut down on eatting junk food and get back to the Gym and try to get myself fit. I also have to get better at returning letters. Here’s my solemn oath of the Fraggles… Weeba weeba, waffa waffa, garpox gumbage, whoopee!

Grant Baciocco, Jim Henson Company Podcast host: I resolve to do at least one creative thing each and every day. And stop biting my nails.

Bear (via Muppeteer Noel MacNeal), Muppet: To learn new dance moves, pick up the violin,… oh and then learn to play the violin, and always remember to finally repaint the house. Which reminds me; Jeremiah has a sale on blue paint, next week. Happy New Year!

Tim Beedle, Fraggle Rock comic book writer/editor: In 2011, I’m going towatch the movie2001 with my five-year-old son and then tryconvincing him that we once possessed the technology to live and travel in space, but lost itsix years ago when it accidentally got tossed out with the junk mail. I’m also going to nominate the first volume of theFraggle Rock comicfor the Eisners, and help put together a second volume of Fraggle Rock that’s even better than the first. I resolve to write more, both for The Jim Henson Company and for myself. And finally, with a little luck, Ihope to finally convinceArchaia to greenlight that 300-page 3D graphic novel based onJim Henson’sCube that’s written entirely in Esperanto. I mean, that baby’sthe reason I started editing Henson comics in the first place!

Tyler Bunch, Muppeteer: Whenever possible I am going to make sure people are aware of my wonderfully talented peers and what they bring to the craft of puppetry … I will sing about the unsung heroes of storytelling.

Katie Cook, Fraggle Rock comic book writer/artist: In late December of 2010, I am expecting my first kiddo… a baby girl! My New Year’s resolution is to start to raise her to love and appreciate the Muppets as much as her mom and dad do. We’re both Muppet fanatics and we’re better people for it…. Kermit is a great role model.

The Count (via Muppeteer Jerry Nelson), Muppet: To only count things that will leave a positive ripple in the time continuum.

Cory Edwards, Fraggle Rock movie writer/director: For 2011, I resolve to eat more Doozer sticks and less fatty foods. I will learn to play the pan flute. I will see the New Muppet Movie with an open mind. I will not put a Tone Loc song in the Fraggle Rock movie. I will track down the Mummenschanz and help them stage a massive comeback. I will work hard to put magic into the world and (hopefully) keep movies from sucking.

Jay Fosgitt, Muppet fan artist: I resolve to continue pursuing my goal of working on the Muppets comics. It’s been my lifelong dream to work with Jim Henson’s creations, and I know I have what it takes to do good work that would make Jim proud.

FrogFan76, “The Bestest Muppet Fan on the Web”: I am the BESTEST Muppet fan on the web, so I couldn?¢‚Ç¨‚Ñ¢t limit myself to just one resolution for the New Year. To prove my Muppet love, I came up with THREE: #1: I resolve to elevate my current level of Muppet fandom. For example, did you know that ?¢‚Ç¨?ìThe Great Muppet Caper?¢‚Ç¨¬ù is available as an iTunes download? So far, I only own five VHS copies, four laserdiscs and two DVD copies. Thus, my collection is incomplete. #2: I resolve to continue my plight of restoring Mildred Huxtetter to her proper level of Muppet stardom. She is in grave danger of being eclipsed in popularity by Angelo. (In case you didn?¢‚Ç¨‚Ñ¢t know, Angelo is ALMOST as famous as Mildred now.) #3: I resolve to achieve an EXECUTIVE level position at The Jim Henson Company. I can?¢‚Ç¨‚Ñ¢t help but notice that the Henson Company is currently relying on interns to generate web content. Surely that must qualify me to become the next Senior Vice President of Global Marketing and Publicity. 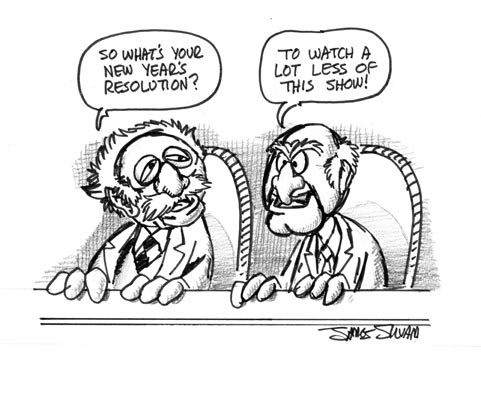 Mr. Johnson (via Muppeteer Jerry Nelson), Muppet: I will resolve to not get angry when it is yet again revealed that Grover is my waiter.

Roger Langridge, The Muppet Show Comic Book writer/artist: In 2011 I resolve to draw, for at least a couple of hours every day, some personal comics work – because I’ve been neglecting it for the past couple of years while I’ve been working on the Muppet Show Comic Book, and it hurts. I resolve to spend more time with my kids instead of taking on so much work that they never see me. And, given that I’m writing this in a hotel in Munich after my plane to London was diverted because of the snow, I RESOLVE TO GET HOME! (I hope I get that sorted out before 2011, but I’m putting that one down just in case.)

Amy Mebberson, Muppet comics artist: I resolve to keep drawing the Muppets in any capacity I can and to to my part to keep Jim’s legacy alive and kicking for new and old fans everywhere.

Alan Muraoka, Sesame Street actor: When I got on Sesame in 1998, I vowed that I would always be able to get into the 32in waist pants that they bought be the first season on the show. Now I’m an eater and foodie, so I diet like a fiend right before each filming season. And every year it gets harder and harder to fit into those khakis. So my resolution is to give up potato chips and ice cream at least until we start filming Season 42. Oops, I just broke my resolution. (burp)

Jerry Nelson, Muppeteer: My personal resolution is to try to exercise more consistently and to cut way down on sweets this new year.

David Petersen, Muppet/Fraggle comic book cover artist: To get not only caught up on my comic workload (as I’m behind currently) but to get AHEAD of it so I can get to building some puppets that have been on my ‘to-do’ list mocking me.

Grace Randolph, Muppet/Fraggle comic book writer: My New Year’s resolution is to be less like a Doozer and more like a Fraggle – I’m looking for a happy medium here! 😛

Steve Swanson, MuppetCast host: My resolutions are: To not worry as much. To do less. To read more. To learn to delegate. To finish what I st 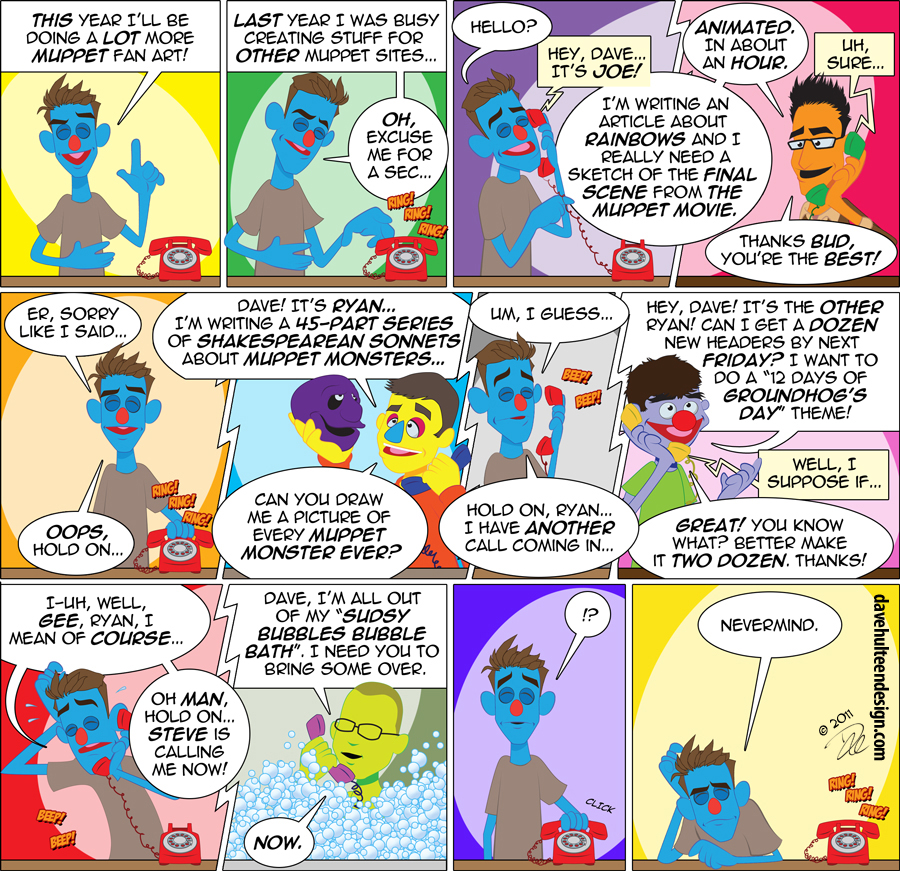 Ryan Roe, ToughPigs.com co-runner: My resolution is to finally watch every episode of every TV show I’ve been meaning to get around to, including Farscape. I am prepared to quit my job and become a hermit to achieve this goal.

Many, many thanks to everyone who participated in this year’s round of New Year’s Resolutions! And Happy New Year to all you Muppet fans out there!

Click here to ring in 2011 with the ToughPigs forum!

2014 in Review: Everything Most Wanted