When the full-fledged trailer for The Muppets showed up a while back, I thought we had seen the last of the shorter parody trailers like “Being Green” and “The Fuzzy Pack.”  But I was wrong!  Now we have “The Pig With The Froggy Tattoo,” as seen here:

Good stuff, eh? I’ll confess, I hadn’t seen the trailer for The Girl with the Dragon Tattoo until I looked it up about two minutes ago, but it’s a good choice for a Muppets parody. Like The Hangover Part 2, which inspired “The Fuzzy Pack”, Dragon Tattoo is definitely not a kids’ movie, so it’s yet another good sign that Disney’s marketing folks are aware that grown-ups could be a huge percentage of the movie’s audience.

One thing that struck me, though… The Girl with the Dragon Tattoo is based on a Swedish crime novel.  The Muppets have a popular Swedish character who seems to appear fairly prominently in the new film.  Did it occur to anyone to make a reference to that in the “Froggy Tattoo” trailer?  Oh well.  As with the other trailers, I’m sure we’ll have more fan-obsessive things to say about it soon, but in the meantime, please continue to watch it over and over again. 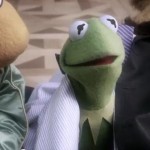 Click here to play with fire and kick the hornet’s nest on the Tough Pigs forum!

Am I a Man, or Am I an Oscar Nominee?