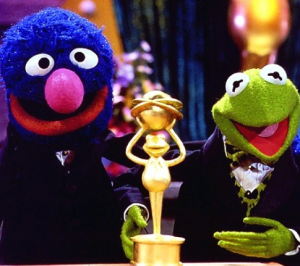 The Best of Everyone
Wednesday, May 22

This is the reason for Sesame Street home video — The Best of Ernie and Bert and The Best of Kermit on Sesame Street. You could watch the show every day for a year without seeing this much of your favorite Muppets. (Actually, you could have, until Sesame 2.0 and Play With Me Sesame came along and instantly quadrupled our Recommended Muppet Allowance. But it’s still nice to have the tapes.)

And, of course, having someone else choose “The Best” of our favorite Muppets is the reason we have Muppet Fan Geek websites like this which are devoted to being cranky about their choices.

So let’s get cranky!

The Best of Ernie and Bert has some good stuff mixed up with some medium good stuff, inexplicably interrupted by Gina, Big Bird, and Ernie’s niece Ernestine, who are all looking at a photo album. Evidently, perfectly simple sketches which require no explanation on TV call for elaborate setups when part of a compilation video — and, for some reason, those setups have to be as irrelevant, labored and dull as possible.

Don’t get me wrong — I like Gina just fine, I couldn’t speak more highly of Big Bird, and Ernestine has never failed to please. I just don’t think they’re strictly necessary here. Every time we cut back to the street, where — and pay attention to the context here, folks, it might be important — where Gina is babysitting Ernestine and reminiscing over Bert and Ernie’s photo album, I start glancing at my watch. This is taking up valuable B&E time, I’m thinking.

And honestly, the explanation they provide isn’t particularly essential. Before we cut to the first sketch, Gina tells us, “This is a photo of the time Ernie and Bert went to the movies,” as if that wasn’t apparent from the movie theater seats, the projector in the background, the movie-atmosphere soundtrack and the heavy reliance on movie-theater-oriented dialogue, such as, “I’m trying to watch the movie, Ernie.”

By the way, sorry for making you pay attention back there — turns out, the babysitting context wasn’t important after all.

So, for those of you who were wondering, here’s the official, Sesame Workshop authorized, all-time Best of Ernie and Bert: Bert and Ernie go to the movies and sit behind a lady with a big hat. Bert and Ernie go camping and identify animals. A doctor visits and examines Ernie before Ernie can explain that he called the doctor for Bert. I Don’t Want To Live on the Moon. Bert and Ernie explore a pyramid and find Bert and Ernie shaped mummies. The National Association of W Lovers. Bert teaches Bernice to play checkers. That’s What Friends Are For. And there you have it.

Rubber Duckie gets a brief a-capella rendition in the Pyramid sketch, and That’s What Friends Are For is so cute that nearly all my crankiness had melted away by the time I started writing up my notes, but thankfully, I still have enough left to say the following: This is tape is so obviously NOT the best of Ernie and Bert that it almost hurts. Picture, if you will, the cr?®me de la cr?®me of Ernie and Bert. You’ve got the image? Okay. This tape is the curds and whey of Ernie and Bert.

Maybe I’m being too harsh. (Maybe that was self-evident.) I mean, it’d be hard to find the worst of Ernie and Bert. Jim and Frank really gave us all uniformly good stuff, and that’s what we’ve been served up in this tape. But A Small Sample of Some Uniformly Good Bert and Ernie Sketches, Interrupted by Unnecessary and Annoying Exposition isn’t quite as catchy a title, is it?

While we’re here, let’s just assume right at the outset that The Best of Kermit on Sesame Street, by definition, suffers from the same selection problems. And let’s assume I’ve already griped about them, in a scathing, witty, yet loving fashion. That’ll save us a bit of time.

The linking material here at least makes a stab at relevance — Grover is presenting Kermit with a Frog of the Year Award. You’d think this would be the perfect scenario for sharp, funny, new Kermit-and-Grover scenes, as well as providing a scenario that’s as close as possible to ideal for exposition (assuming, for the moment, that exposition is actually necessary).

You’d think. Except that Kermit spends the whole time sitting away from the action, and Grover does all his interaction with three little pigs, whose excuse for being there is that Kermit interviewed them a couple of times for Sesame Street News. They’re sort of the comic relief, I guess, except that they’re comic relief for Grover, so whatever.

Grover shows a whole bunch of clips — mostly good clips, some real classics, many involving classic Kermit-Grover interplay, so no real complaints beyond what we’ve already assumed. But Grover also shows a bunch of new clips of himself talking to little girls about Kermit. They’re great, the girls are really cute, and one of them furnishes us with my current all-time favorite Muppet quote: “Kermit’s, like, the only frog that can act and mostly the only frog who wears clothes.” But why does Grover get to talk to the cute little girls on The Best of Kermit video? Why not, say, for example — and I know I’m going out on a limb here — why not Kermit?

In amongst the clips, we’re treated to a sequence of 16 moments from Sesame Street News — but it’s a tease, we don’t get any complete sketches. It’s a masterpiece of editing, and, like this whole compilation, it’s obviously a labor of love, but it almost seems like they’re putting so much effort into doing a proper tribute to Kermit that they’ve forgotten to put enough Kermit in it. And then, just to rub things in, after burying him in a crowd scene for the length of the tape, when Kermit finally gets a brief scene at the end, he actually steals the show.

But, once again, Sesame Workshop, evil fiends that they are, save the sweetest, gentlest, most tear-jerkingest moment for the very end, and leave me without a critical flipper to stand on. Grover, speaking on behalf of Kermit, who is burdened by his enormous prize, says: “Froggy wanted to thank… the little people behind the scenes, the big people behind the scenes, and someone called Jim.”

So, you know, no hard feelings.

Tomorrow: Let the chips fall where they may — it’s Random Sesame.

My Week with Play With Me Sesame – Wednesday

My Week with Play With Me Sesame – Thursday

My Week with Grover’s Mom – Tuesday: The Perm Years