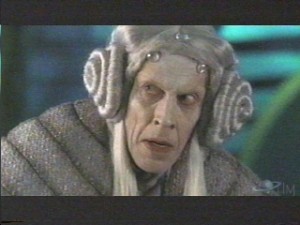 At the end of the last episode, the crew got tired of being caught between the Peacekeepers and the Scarrans, so they escaped into Tormented Space. And everybody sort of gasped, and said, oh no, Tormented Space! And Crichton said, well, is Tormented Space any worse than anywhere else we go? And everybody said, oh, yeah, it’s so totally worse. You have no idea how much worse it is. Phew! Worse.

So in this episode, they go to Tormented Space, and guess what? It’s exactly the same. It’s just like when Doctor Who went to E-Space, or Star Trek went to the Gamma Quadrant, or Ellen fired all her friends and bought a bookstore. It’s the same show, on a slightly different set.

They spend this episode on a planet that’s populated entirely by men with really odd wigs. They’re barbarians in the kind of 50’s B-movie Teenage Caveman way, in the sense that they’re really clean and they don’t scratch themselves, but they keep shouting stuff like “That IS the law!” and “This is Chabuka Clan’s finest ecmec!” and “Give me a reason not to KILL you!” In other words, they’re just like normal people except they’re really incredibly tiresome.

By the way, have I mentioned the wigs? I’m having a hard time getting beyond the wigs. Everybody has them and they’re incredibly distracting. There’s all this complicated political stuff going on, and I can’t pay any attention to it. There’s two hundred clans on this planet — and I don’t care how tormented your space is, that’s a lot of clans just for one planet. All the clans have recently united under a new system where they choose a different leader every half-cycle, and heavy is the head that wears the crown, and what have you, but the whole time, I’m just thinking, do you have to all wear your hair in big floppy dreadlocks like that? According to Maslow’s Hierarchy of Needs, we need food, shelter and a decent protein-rinse conditioner first, and then we can worry about political structures.

Around this point, Aeryn loses her patience and just starts shooting people, and I for one couldn’t be happier. She runs off, and now everybody’s even more cranky than they were before. Here comes the Teenage Caveman dialogue again: “FIND her! KILL her! And if she acted on anyone’s behalf, we’ll catch her — and TORTURE her! — until she TELLS us!” Then there’s a big discussion about whether Crichton — an OUTSIDER! — can help search for Aeryn. “My father is DEAD! His BLOOD is still WET on the GROUND!” and so on. Everybody speaks in capital letters pretty much nonstop. It’s a planet of method actors, and their method is three shots of espresso.

So Crichton and the dead guy’s son go searching for Aeryn. I’m putting a picture of the son here, cause if I have to look at that hair the whole time, then so do you. The two of them are apparently planning on searching this enormous forest on foot — looks like nobody in the two hundred clans ever got around to inventing cars or horses or hot-air balloons, so they just walk for miles and miles. They have big fuck-off ray guns and enormous stone towers on this planet, but no wheels. I’m going to jot down a little Shopping List for Tormented Space: #1. Haircuts. #2. Transportation.

They find Aeryn, and then they all sit down for a little exposition. Turns out Aeryn was bitten by an alien bug that infected her with evil mind-control venom. How they figure this out is that Aeryn mentions that she was bitten by a bug, and the priest says, “There are no bugs on this planet.”

Okay, excuse me? There are no bugs on this planet? Is it even possible to have this whole Earth-like ecosystem without any bugs? What pollinates all that foliage, squirrels with jetpacks? Back me up on this, folks. We gotta get some bugs for this planet. #1. Haircuts. #2. Transportation. #3. Bugs.

So what else do they need? Well, some long-sleeved shirts probably wouldn’t do them any harm. Now Crichton and Aeryn have to track down the source of the evil mind-control bugs, but they don’t bother to cover up the acres of exposed flesh that’s apparently de rigeur for fashionistas of the future, so they get bit like crazy, and they end up pulling guns on each other.

Meanwhile, there’s the requisite Evil Leader — played here by an albino Shelley Duvall as Marilyn Manson. He’s the one that’s been spreading the evil alien bugs, so that he could incite ANARCHY! and WAR! and other bad things that he’s planning to blame on the OUTSIDERS! He mooches around in his throne room and reveals his whole entire plan in front of Chiana for pretty much no reason at all, and then everybody shows up and says, hey, you’re doing all these bad things, so he throws himself out a window. And that about wraps it up.

Basically, the entire thing could have been avoided if they’d just had live video feeds from the throne room on C-SPAN, but I guess they’re all too busy braiding their hair to invent anything useful. Gosh, maybe things are worse in tormented space.

My Summer with Farscape – Episode 5