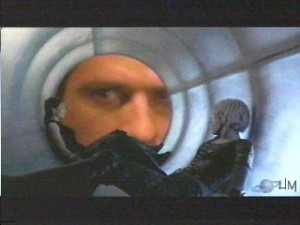 So here’s the true, horrible, behind-the-scenes story of my miserable web monkey life. Every week, Ed and I watch Farscape, and at the end of the episode, I always have this awful, sinking Stage Fright moment when I look over my notes and realize that I don’t have a single decent joke.

I turn to Ed and say, “So… what can I make jokes about?” and then we do a kind of damage control brainstorm. We always start with the gimmick, which this week is that the cast gets shrunk and carried around in jars. So, sea monkey jokes? That’s funny, but maybe too obscure, especially for anyone under 25. Jim Henson’s Farscape Babies? Not bad, but I’m not sure where to go with it.

Then it hits me: Penis jokes! I can just make jokes about penis size the whole time! Phew, what a relief. Now I’m in the zone. If I can’t do ten paragraphs of penis jokes, then I don’t deserve my own website. Bring it on.

What happens is that Crichton takes a shuttle to go grocery shopping, and when he comes home, he finds that robot bounty hunters have boarded the ship and taken everyone hostage. Well, that’s the life of the working mom, I guess. You should’ve seen what happened last time he went out to dinner. Babysitters in the Peacekeeper territories just aren’t that reliable.

Anyway, the bounty hunters are using bioengineered armor shells, which basically means that they’re walking tanks with Christmas lights. They’re impervious to bullets, they have remote-control torture devices, and their leader can read minds. Now, is it just me, or does it seem like every week they have to make the bad guys scarier and scarier so we don’t get bored? I can’t wait for next week, when the villain is a telekinetic pirahna monster who juggles chainsaws and spits fiery death from his bioengineered nipples!

Also, by the way, since when did “bioengineered” become the Farscape code word for “magic”? As you’ll recall, three episodes ago, the bad guy “bioengineered a contagion” that made Aeryn sick. Now we’ve got “bioengineered body armor” that repels lasers and shrinks people. When you get right down to it, what does “bioengineered” actually mean, anyway? I’m starting to suspect that “bioengineering” is some kind of Emperor’s New Clothes next-wave yuppie fad in the Farscape universe — it’s something that everybody talks about but that doesn’t really exist, like “Dolby sound” or “anti-lock brakes.”

Man, we’re six paragraphs in and I haven’t gotten to the penis jokes yet. I better step on it.

Next, the bounty hunters walk through the typical Four Stages of Fictional Hostage Taking. Stage one: We have your friends and control of your ship, Mr. Crichton, you might as well give yourself up! Stage two: There’s no use hiding from us, Mr. Crichton! We will find you! Stage three: If you don’t show yourself now, we’ll be forced to harm your companions! Stage four: Drat! He’s a more formidable opponent than we thought!

At this point, they pull a bioengineered rabbit out of a hat, and shoot everyone with a magic shrinking ray that reduces them down to three apples high. They put their little pets into jars, and shove the jars right into holes drilled into their own chests. And wouldn’t that be cool as the next teenage rebellion? Forget tattoos and piercings; I want a hamster wheel surgically implanted in a little window in my torso!

Anyway, Scorpius figures out the big surprise of the episode, which is that the mind-reading leader of the bounty hunters isn’t a Coreeshi after all — he’s a Scarran who’s masquerading as a Coreeshi!

Okay, does it count as a plot twist if I have no idea what they’re talking about? Finding out about this just tears it for everyone. I mean, getting shrunk down to Smurf level and carried around in a jar is bad enough, but if it’s a Scarran doing it, well, then that’s just… No, I’m sorry, I still don’t get it. But everybody on the show seems to think it’s a big deal, so we’ll just go with it for now.

So Crichton tells the Coreeshi that their leader’s a Scarran and not a Coreeshi. The Coreeshi demand that the Scarran take off his armor and prove to them that he’s a Coreeshi and not a Scarran. The Scarran shoots the Coreeshi, and then it just pretty much goes on from there. As naturally it would. I mean, if you’re a Scarran, and you’re going around telling everybody that you’re a Coreeshi, then you could imagine how…

Nope, sorry. Nothing. It’s still not working for me. Maybe we could just cuddle for a while.

My Winter with Farscape – Episode 16